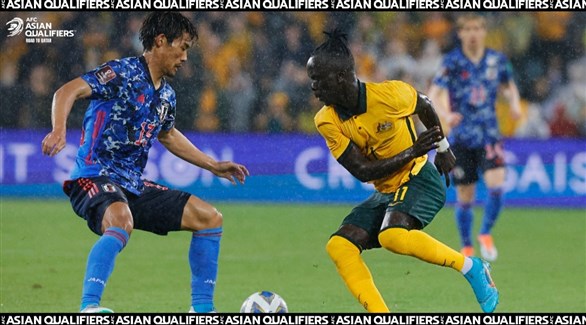 The Japan soccer team joined the ranks of the qualifiers for the Qatar 2022 World Cup, after their valuable and late victory over their Australian hosts on Thursday, in the ninth and penultimate day of the matches of the final phase of the qualifiers Asian.

The Saudi national team also benefited from this result and qualified for the final, regardless of the outcome of their matches, against China today and Australia next Tuesday.

The Japanese team raised their score to 21 points to temporarily take the lead of Group B on this matchday, just two points clear of their Saudi counterpart, who can lead the way again by defeating the Chinese counterpart in another match today at same round.

The balance of the Australian team was frozen at 15 points in third place, but their hope of direct qualification for the World Cup is limited to the Asian and world playoffs.

The two teams ranked first and second in each of the two groups qualify directly for the final, while the third-ranked teams will access the Asian play-off, and the winner of them will qualify for the world play-off in which faces the fifth classified in the South American Qualifiers.

Teams from Iran and South Korea booked direct qualification cards from the first group to the final, while a three-way Arab fight for third place is raging between teams from the Emirates, Lebanon and Iraq.

A negative draw between the Australian and Japanese teams lasted until the penultimate minute of the match, but Karo Mituma scored two consecutive goals in the 89th and 4th minutes of extra time to give Japan and Saudi Arabia a visa to qualify for the World Cup .