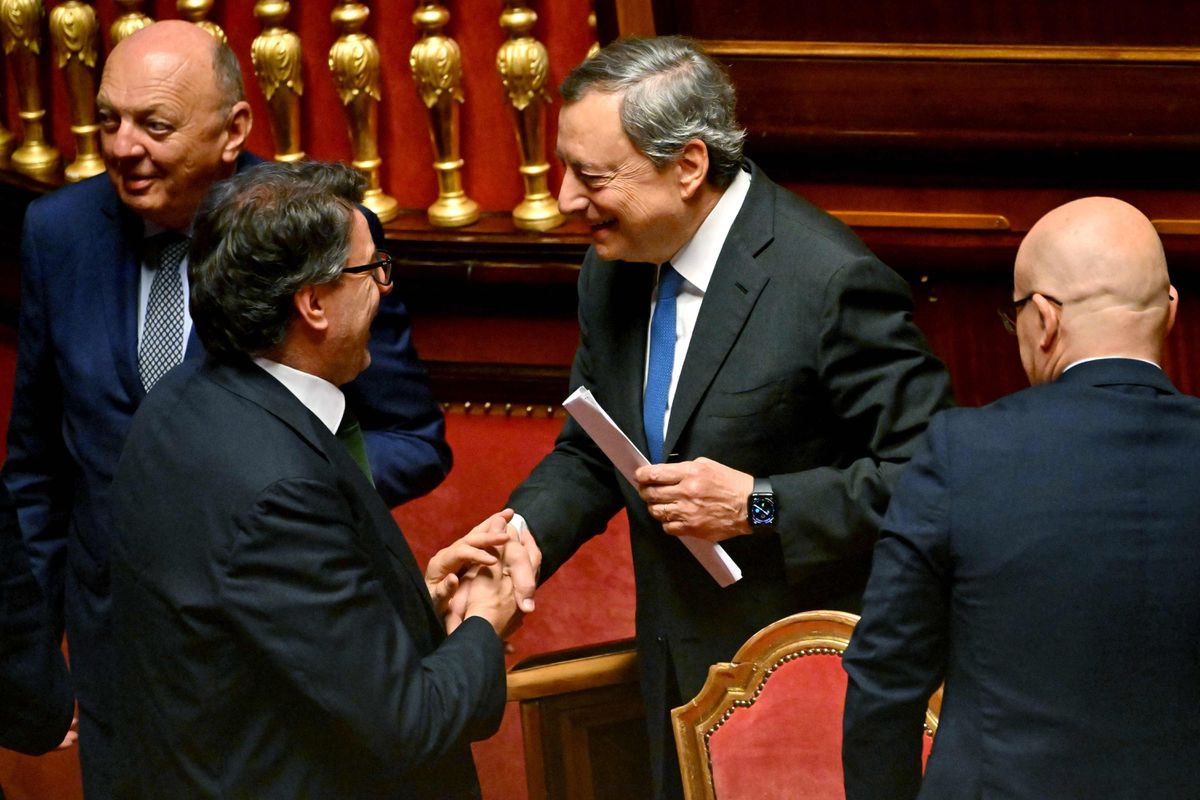 The Italian parliament, a ferocious and self-destructive beast like few others, completed its final deadly work on Wednesday, liquidating the legislature, forcing Prime Minister Mario Draghi to resign. The violent event has many parents. But it was the right-wing parties, Forza Italia and the Lega, who put the finishing touches on the executive branch to which they belonged. Both formations refused to vote on last Thursday’s confidence motion by which the prime minister agreed to reconsider his resignation. This refusal was later joined by the Five Star Movement (M5S), the party that originally caused this crisis and which Draghi heavily attacked. A grotesque and destructive spectacle at a very delicate moment for Italy and Europe, ending a 17-month tenure in which the country had regained its international leadership.

Draghi did not wait for the outcome of the vote, which could be considered invalid due to lack of turnout. But it didn’t matter because it wasn’t about arithmetic, it was about checking if he still had a unified backing. The Prime Minister got into his official car and drove off. But his entourage has announced that he will not go to the Quirinal Palace, seat of the presidency of the republic, until Thursday morning. He is expected to hand in his resignation at that time. And the head of state will probably have no choice but to accept it this time and dissolve the chambers. The question remains whether he will look for a formula to salvage the reforms launched by the Draghi executive and maintain the country’s stability until the next budget law at the end of October. Otherwise, elections are scheduled for the last week of September or the first week of October.

Draghi, visibly upset and disappointed with his response when the worst-case scenario was almost inevitable, tried one last time. “Today I had two options. Confirm my resignation and leave without a vote of confidence. But the support I’ve seen across the country is unprecedented and impossible to ignore. This has prompted me to propose the coalition pact again and put it to your vote. you decide. So no demand for powers of attorney,” he addressed to those who accused him of organizing the session to usurp a power that the polls had not bestowed on him. But it was already too late. La Liga and Forza Italia, angered by their violent intervention earlier in the morning and confident that the snap election scenario would work in their favour, had already made their decision. The ship sank. Not wanting to be outdone, the M5S also refused to endorse Draghi. The legendary ex-president of the ECB went from resigning with dignity to being fired in just six days. The show starts now. But, as Michel Platini warned, when the acrobat falls, the clowns usually come in.

For his part, Matteo Renzi, boss of Italia Viva, warned against speaking. “Tomorrow nothing will be the same in Italy.” The hype has some real points. Wednesday’s staging in the Senate left the image of Italy very touched. But the power structure will also change. Silvio Berlusconi’s Forza Italia, one of the promoters of the break, will break into pieces. The resignations started yesterday. Half of the party, citing moderation and its membership of the European People’s Party, were stunned by what had happened. There was an attempt at mediation with Il Cavaliere up to the last moment, but the part of his party that most influences his decisions pushed him to support the populist parties and overthrow the executive branch to which he belonged. A surprising decision given Italy’s outstanding commitments to the EU, pending reforms to receive funds from the recovery plan and the war in Ukraine, in which Italy plays a fundamental role.

The morning had started better for Draghi. Before Draghi’s performance at 9.30 the climate was optimistic. Italy’s risk premium fell early this morning and the stock market showed no signs of concern. Draghi couldn’t ignore the tremendous pressure he received not to resign. From Brussels to Washington, via the President of Ukraine, Volodimir Zelenski, they have recently called on him to reverse the decision made on Thursday to resign. It was like this. In a long and thick speech in the Senate, the former President of the European Central Bank reviewed the great work done by his executive over the past 17 months, the reasons for the rupture and the need to rebuild national unity in order to move forward. He attributed his change of position to the huge popular support in recent hours, but also made it dependent on the party.

The prime minister outlined the challenges ahead that remain for this executive, as some of his best allies had advised him in recent days, and was open to completing the work if the parties sign off on his roadmap. He presented a real government program that revealed the formations. Take it or leave it, he came to tell you. “Italy doesn’t need a facade of confidence that fades with every uncomfortable move. A new sincere and concrete pact of trust is needed. Parties, parliamentarians, are you ready to rebuild this pact?” He asked her three times before questioning her again: “Are you ready to confirm the efforts you have made in the first few months?”

The Prime Minister asked to complete the post-pandemic recovery plan and reforms requested by the European Union in order to continue injecting the agreed funds (up to 230,000 million euros). He also referred to international affairs, particularly support for Ukraine based on continued arms shipments (a measure opposed by the 5 Star Movement). He has also been unexpectedly tough with La Liga’s position on some issues, warning that he will take a look at Citizen Income, the league’s star measure grilling this legislature. Draghi’s aggressiveness caused some surprise in the ranks of both formations, who avoided applauding like the others.

Draghi had arrived at Madama Palace, the seat of the Italian Senate, after 9.30pm and got straight to the point. “Last Thursday I submitted my resignation to the President of the Republic. I made the decision because the majority that has supported this government since its inception was broken. The President refused to resign and asked me to explain to Parliament and to all Italians here today the reasons for a hard fought and fair election.” Draghi justified his decision by saying that the only democratic legitimacy that a prime minister who did not go to the polls has could be “the greatest possible support from Parliament”. “Especially when you have to make decisions that profoundly affect the lives of citizens.” The Italians demand it above all, ”he pointed out. But by then his fellow travelers had probably already sold him.

Italy, scene of 67 governments in the last 76 years, now faces a new crisis scenario. The country is used to living in institutionalized chaos, which has allowed it to survive for decades by putting off reforms and major renovations. But this time, in the midst of war and with an economic scenario of extreme volatility, the rupture is portrayed as one of the most absurd, incongruous and self-destructive in recent memory.