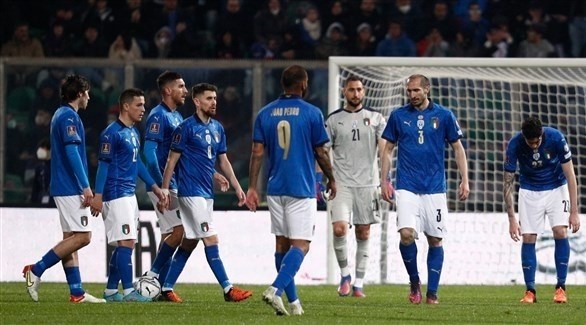 Italy woke up on Friday in a state of shock, after experiencing a dark night in Palermo, with the team eliminated from the European playoffs and not qualifying for the World Cup final for the second time in a row.

After experiencing the disappointment of missing out on the world final for the first time in 60 years four years ago, the Italians were optimistic under new coach Roberto Mancini, especially after winning the European Cup last summer.

But the surprise came on Thursday, at the hands of North Macedonia, with a goal by former Palermo striker and current Saudi Al-Fayhaa, Alexander Trajkovsky in dead time (2+90), to give his country the third clue of the final. Card of the European qualifying play-off for the Qatar 2022 World Cup, where it will be measured this Tuesday with Portugal in Porto.

Adding to the horror of what happened on Thursday is that Italy have never lost a home game in their World Cup qualifying history, going into North Macedonia with a record 48 wins and 11 draws in house from the start. of the qualifiers for the final since the second edition in 1934, when they beat Greece 4-0 in Milan en route to later winning their first world title.

With great sadness, the newspaper La Repubblica, after the great national disappointment, headlined “Everyone at home”, and said that what happened on Thursday in Palermo constitutes “Goodbye to the National Team, which we lost forever”.

And the Italian team was placed in this position after being satisfied on the last day of group C of the European qualifiers with a goalless draw on Northern Irish soil, which allowed Switzerland to snatch the card with a 4-0 victory over Bulgaria.

Without a doubt, the Italians paid the price for the 1-1 draw on the penultimate matchday at home against Switzerland, in a match that missed a penalty in the last seconds through Jorginho, who also missed a penalty against “Nati” in the first leg . , which ended in a goalless draw in Switzerland.

On the eve of hosting North Macedonia, which also played a part in dragging Italy into the 2018 World Cup play-offs, (sweden out by Sweden) after forcing the “Azzuri” to settle for a 1-1 draw at home in the penultimate In the qualifying round, Mancini commented on the two missed penalties, saying: “It was. We can’t be in this situation, but that’s football.”

Soccer is as cruel as it is beautiful, and veteran defender Giorgio Chiellini knows that, entering Thursday’s game in the second half to witness the national disaster of a country that has won the world title four times.

“Now we’re in a daze, it’s hard to explain, I think we played a good game again and didn’t score,” Chiellini said.

He continued: “We made mistakes from September (during the qualifiers) until now and we paid the price for them. I am proud of my teammates and this group. We have to start again.”

Hopefully Mancini stays, who has given so much to the national team.

On the offensive sterility, the Juventus defender said: “It’s not that we didn’t create chances, we had 32 shots on goal.”

However, unlike Chiellini, the newspaper La Stampa considered that the selection had made a “disastrous performance”.

For the Milan-based newspaper, Italy’s exclusion heralds a “change of generation” and a “reset”.

La Gazzetta dello Sport was not surprised by what happened this Thursday, at the Renzo Barbera stadium in the Sicilian capital, before full capacity stands for the first time since the outbreak of the virus in La Coruña at the beginning of 2020.

And the sports daily said: “Winning the European Cup was a happy break between years of disappointment at the national team and clubs,” referring to the end of Italy’s campaign in the first round of the 2010 and 2014 World Cups. and its non-classification. for the 2018 final, in addition to the disappointment of the Italian clubs and their modest results in the European Champions League.

And he continued: “Our football is paying a very high price: it still lacks vision and there is no courage… Mancini’s judgment would be a mistake, it is the entire calcium system (Italian football) that must be reviewed.”

As for the other sports newspaper, Il Corriere dello Sport, he does not seem convinced of the idea that Mancini will remain in his position until the end of his contract, which was renewed until 2026 after the continental coronation last summer, stressing that “it is time of responsibility”.

Although he is a friend of Mancini, the editor of the newspaper Ivan Zazzaroni considered that “Mancini was the architect of the European victory and Mancini was mainly responsible for this failure”.

And what happened against North Macedonia “does not surprise” the newspaper Il Messaggero, because it is “the result of years of free fall (deterioration)”, explaining: “We have not won at club level in European competitions. since 2010 (when Inter won the Champions League), this long drought is unprecedented in the history of the European Cups.

And he continued: “In the last 15 years, the First Division has fallen apart, from the fall of Juventus (to the second division) after the Calciopoli case (settlement of results in 2006), until the departure of (Silvio) Berlusconi (giving up ownership of Milan) and (Massimo). Moratti (relinquishing ownership of Inter), all of that has weakened the great historical clubs and undermined the balance, weakening the entire league.”

For the president of Serie A, Lorenzo Cassini, there must be “a serious reflection and a profound change in the system,” he said in a statement after the dark night in Palermo.