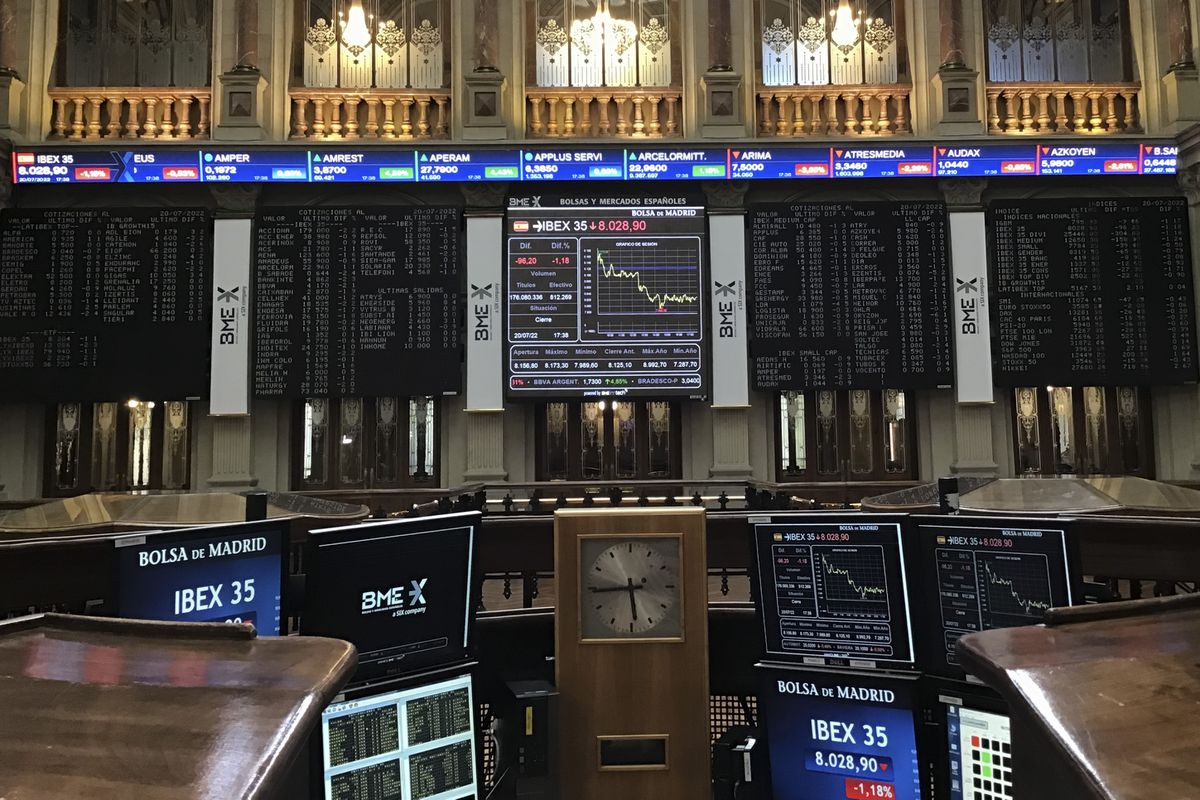 The development of the political crisis in Italy keeps investors on their toes. Prime Minister Mario Draghi has handed in his resignation after several coalition parties abstained in a confidence vote on rebuilding the divided coalition. But Rome is not the only focus of stock exchange operators this Thursday: the European Central Bank is preparing for an interest rate hike for the first time in eleven years in order to stop the price rise. Amid the climate of high uncertainty, Italy’s Mib fell nearly 2% and the country’s risk premium has risen six points to over 230 since the last session. The other markets of the old continent are tumbling: the Ibex 35 and the French Cac, after falling at the opening, have turned around and slight increases can be noticed. Frankfurt, on the other hand, is still in the red with 0.3% left. “Investors don’t mobilize. They are waiting for news from the ECB,” says Sergio Ávila, an IG analyst.

Within the Spanish sample, Bankinter and Solaria stand out among the top benefit stocks, up 2%. On the other hand, Repsol, Cellnex and Meliá are penalized the most, leaving behind more than 1%. The Spanish risk premium is at 126 basis points, up 4 from the previous day. In the forex market, the euro edged higher this Thursday after losing parity with the dollar for the first time in 20 years last week. The resumption of gas flow in the Nord Stream 1 pipeline is mild relief for the shared currency, although growth concerns have not stopped, further weakening the euro zone’s currency, which has lost 10% so far this year.

In times of weak risk appetite, Frankfurt faces a double challenge. In the first place to curb runaway inflation for a year by increasing the price of money. ECB President Christine Lagarde has paved the way for a 25 basis point rate hike, although several analysts are not ruling out a more abrupt 50 point hike. The goal is for commercial banks to charge their customers more for lending after months of rampant consumption, which has led to increasing price pressure.

Regardless of its decision, regulation of monetary policy by Europe’s financial hub follows the Federal Reserve, which has raised interest rates three times this year. Therefore, even if the ECB decides to hike more, markets should not react virulently as investors know that Frankfurt has fallen behind the rest of the major central banks in the fight against inflation, Link Securities warns.

At the same time, the monetary institute has to present the details of the new mechanism announced at its last extraordinary meeting to avoid fragmentation of the euro zone. A tool that is more urgent than ever given the possibility that Italy’s risk premium will skyrocket with the country heading for snap elections due to the government crisis.

Investors are wondering if the stocks’ slide has bottomed after a sell-off in recent months amid war in Ukraine, a slowdown in China and fears of an economic slowdown. The instability of the geopolitical situation continues to cause uncertainty on the financial markets. Although Germany’s Nord Stream 1 gas pipeline resumes operations this Thursday after 10 days of maintenance, the European Union is preparing for a scenario in which Russia halts gas exports. Russian President Vladimir Putin said flows would be reduced if disputes over sanctions are not resolved. Faced with the Kremlin’s threat, the European Commission wants all member states to reduce their gas consumption by 15% between August 1 and March 31 next year, regardless of their dependence on Russian gas. A measure yet to be evaluated by bloc governments.

Wall Street futures are trading slightly lower after US stocks closed higher the previous day. The Nasdaq Composite index, which brings together the big technology companies, was up more than 1.5% after company results gave encouraging signals. Netflix grew its revenue by 9% in the second quarter despite losing a million subscribers. A negative but significantly better-than-expected number for the world’s largest streaming platform, which shot up the company’s stock value by 7%.

- Advertisement -
Share
Facebook
Twitter
Pinterest
WhatsApp
Previous articleThor 4: Why Lady Sif’s Final Scene Was a Brilliant Shot!
Next articleThe Supreme Court annuls the acquittal of three ETA members in the murder of a police officer in Galdácano and orders a retrial