It manufactures 350 phones per minute. The success story of the “Chinese iPhone” city 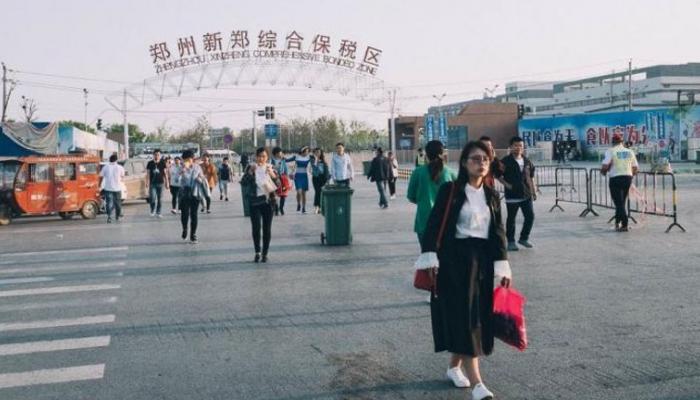 From just a city whose population suffers from poverty, working only in agriculture, to one of the most important industrial centers in the world.

The Zhengzhou of China, or as it is called “the city of the iPhone”. smartphone

This city, located in the heart of central China, tells a story of success and transformation from a poor city to a large industrial city.

The city is home to the world’s largest Apple factory, providing half of Apple’s total production capacity thanks to large investment incentives China provided to Apple of America.

Government officials, in tight uniforms, run around what is described as a maze of wooden pallets stacked with boxes, counting, weighing, scanning and approving shipments, as unnamed trucks stretch for more than a mile waiting for the next shipment to arrive. Beijing, New York. or London and dozens of other parties.

According to the New York Times, on a city tour, the facility was built several years ago to serve Apple, now the world’s most valuable company and one of China’s largest retailers.

A carefully crafted customs system is part of the hidden benefits, as are tax cuts and subsidies to support the world’s largest iPhone factory, according to classified government records seen by The New York Times, as well as interviews with more than 100 workers. of the factory and logistics. , truckers, tax experts and managers. Current and former at Apple.

He continued: “The stimulus package, estimated at billions of dollars, is critical to the production of the iPhone, Apple’s best-selling and most profitable device.”

All because the local government proved effective and provided significant investment incentives to attract Apple, donating more than $1.5 billion to build much of the Foxconn plant, as well as build nearby housing for employees.

The government also paved roads and established new power plants. It also helped cover the ongoing cost of power and operating transfers, brought labor to the factory’s assembly line, and also paid bonuses to the factory to achieve export targets.

Recently, the imposition of home quarantine on the 17 million inhabitants of the city of Shenzhen, in southern China, due to a record increase in the number of Covid-19 infections, caused the iPhone factory to suspend its work. In this city.

And the authorities of Shenzhen, the technological center, announced, last Sunday, the entry into force of the imposition of the stone, due to the emergence of epidemic outbreaks in the city, linked to the neighboring territory of Hong Kong, which is devastated by the virus.

The Taiwanese electronics giant Foxconn, Apple’s main manufacturer, announced on Monday the suspension of its activities in Shenzhen, due to the stone that affected the work of its factories.

Foxconn, which employs tens of thousands of workers in the city, said it has moved production elsewhere.

Shenzhen is one of ten cities in China currently under lockdown measures.

Foxconn, according to media reports, assembles most of the iPhone at another factory in Zhengzhou, central China, known as iPhone City.

If you own an iPhone, the most likely product is a huge industrial complex in the Chinese city of Zhengzhou, which has an estimated population of 9.5 million and is located in China’s poorest province, Henan.

Some 350,000 people work at the factory complex, which is run by Taiwanese electronics maker Foxconn, and produces nearly half of the world’s iPhones.

Production movement within the factory is particularly active during the summer months, raising the daily production level to 500,000 sets, or an estimated 350 sets per minute.

Because it was so large and encompassed a vast area of ​​more than 2.2 miles, this industrial complex was nicknamed “iPhone City,” where workers lived in 10- or 12-story buildings.

Trees are scattered throughout the complex, in addition to the presence of police and security forces on each side. It is remarkable that more than 10 years ago, that vast area contained nothing but waste, fields of corn and wheat.

By 2010, the government had purchased the land from local farmers and the factory was built and put into operation during the same year.

The regional government gave the plant $600 million in subsidies, in addition to countless other subsidies, tax incentives, and subsidies to keep the production line within Zhengzhou.

Since the factory began operations, the government has been willing to pave new roads and build power plants, as well as help cover energy and transportation costs, and even pay additional amounts to the factory to help it achieve its export goals. .

Not only that, but the government helps recruit, train, and provide housing for factory workers during periods of peak production.

Since it began making iPhones for Apple in 2007, Foxconn has faced accusations of violating workers’ rights, providing poor working conditions for its workers and imposing harsh penalties on workers who make mistakes.

The years 2010 and 2011 saw a wave of suicides among Foxconn workers, forcing the company, in concert with Apple, to adopt changes within the factories.

The daily grind of life inside “iPhone City”

According to the iPhone City workers, the daily routine of life within the “iPhone City” follows the following pattern in its entirety:

Heading to the factory at 7 o’clock

He has breakfast and starts work at 8 o’clock.

The shift ends at 5, but if overtime is offered, most agree to stay at the factory until 8 or 10 at night.

After work, workers have dinner with friends or get together to play video games until 10 or 11 at night and then go to sleep.

The viewer of this experience, which is considered a success story thanks to the intelligence of the Chinese government in providing sufficient investment incentives to attract a giant company the size of “Apple”, can deduce the most important incentives that the Chinese government thinks of. foreign investor, studying different markets to choose the best among them to inject their investments, which translates in the long term, the short and medium term translates into an increase in job opportunities, growth rates and sources of income in hard currency in the country that offers more incentives.