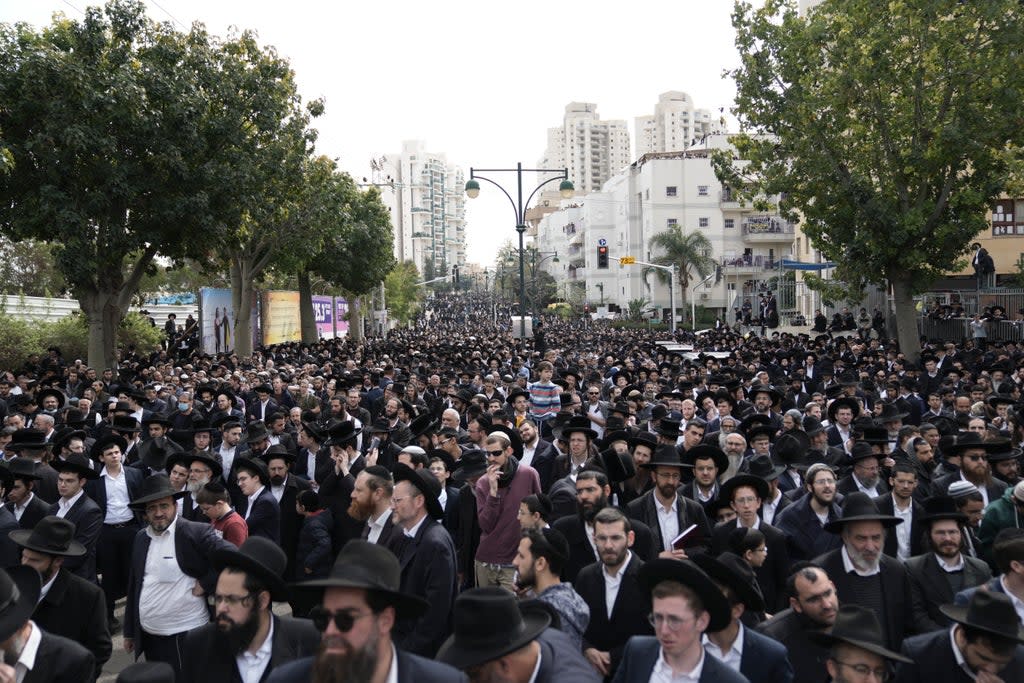 Hundreds of thousands of people attended the funeral of a prominent ultra-Orthodox rabbi in a central Israeli city on Sunday.

Rabbi Chaim Kanievsky, 94, one of the most influential scholars in the country’s religious community, died on Friday. He was one of the few remaining leaders of the ultra-Orthodox community in Israel born before the Holocaust. Kanievsky was revered by many in the Jewish religious world.

The rabbi was buried in Bnei Brak, the predominantly ultra-Orthodox city near Tel Aviv where he lived. Israeli media estimated that more than 350,000 people attended the funeral procession from his home to a nearby cemetery.

Police closed several roads in Israel’s densely populated Tel Aviv area to traffic for several hours, and other main thoroughfares were expected to be blocked. Authorities urged the public not to enter the area by car. The Communications Ministry said it expected cellular network outages around the funeral due to high volume and advised people to only make essential calls.

Aerial footage of the funeral showed huge crowds of mourners, most dressed in the characteristic black suits and black hats typical of ultra-Orthodox men, filling the narrow streets of Bnei Brak around the late rabbi’s home.

The insular ultra-Orthodox community makes up about 12% of Israel’s 9.4 million people. They adhere to a strict interpretation of Judaism, with a focus on Torah study and observance of tradition. Prominent rabbis like Kanievsky play an important role in community life and act as arbiters in all matters.

Funerals play a key role in traditional Jewish life, with those of leading rabbis often drawing thousands of mourners.

Although he did not hold any official position, Kanievsky was considered a major luminary in the non-Hasidic ultra-Orthodox world. He rose to public fame at the start of the coronavirus pandemic when he instructed his followers that closing religious seminaries was more harmful than the virus. He later retracted those claims as infections spread in densely populated Bnei Brak.

Kanievsky’s death made the front pages of almost every newspaper in the country on Sunday, from the liberal Haaretz to ultra-Orthodox dailies like Yated Neeman.

Israeli Prime Minister Naftali Bennett said at the start of the weekly cabinet meeting that Kanievsky’s death was “a great loss for the Jewish people.” On Saturday, opposition leader Benjamin Netanyahu paid his respects at Kanievsky’s home.