Is Vladimir Putin a war criminal and who decides? 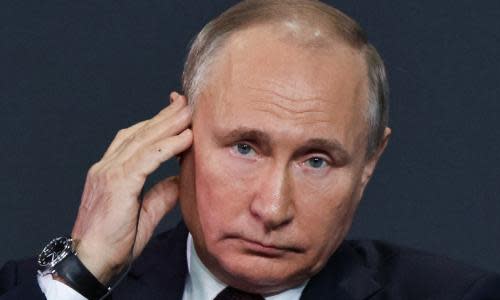 Joe Biden called Vladimir Putin a “war criminal” on Wednesday over the attack unfolding in Ukraine, where hospitals and maternity wards have been bombed.

But declaring someone a war criminal is not as simple as saying the words. There are definitions and established processes to determine who is a war criminal and how he should be punished.

Here’s a look at how this all works:

Who is a war criminal?

The term applies to anyone who violates a set of rules adopted by world leaders known as the law of armed conflict. Rules govern how countries behave in times of war.

Those rules have been modified and expanded over the past century, drawn from the Geneva conventions after World War II and the protocols added later.

The rules are intended to protect people not involved in combat and those no longer able to fight, including civilians such as doctors and nurses, wounded soldiers and prisoners of war. Treaties and protocols establish who can be attacked and with what weapons. Certain weapons are prohibited, including chemical or biological agents.

What specific crimes make someone a war criminal?

“Grave breaches” of the conventions that amount to war crimes include intentional homicide and the widespread destruction and appropriation of property not justified by military necessity. Other war crimes include deliberately targeting civilians, using disproportionate force, using human shields, and taking hostages.

The international criminal court (ICC) also judges crimes against humanity committed in the context of “a widespread or systematic attack directed against any civilian population.” These include murder, extermination, forced relocation, torture, rape, and sexual slavery.

The most likely way that Putin could come to be defined as a war criminal is through the widely recognized legal doctrine of command responsibility. If commanders ordered or knew or were in a position to know about the crimes and did nothing to prevent them, they can be held legally responsible.

What are the paths to justice?

In general, there are four paths to investigate and determine war crimes, although each has limits. One is through the ICC.

A second option would be for the UN to hand over its work on the commission of inquiry to a hybrid international war crimes tribunal to try Putin.

A third would be to create a tribunal or court to try Putin by a group of interested or concerned states and groups, such as NATO, the EU and the US. The Nuremberg military tribunals against Nazi leaders are one example.

Finally, some countries have their own laws to prosecute war crimes. Germany, for example, is already investigating Putin. The United States does not have such a law, but the justice department does have a section that focuses on acts including international genocide, torture, recruitment of child soldiers, and female genital mutilation.

Where could Putin be tried?

Have national leaders been prosecuted in the past?

yes From the Nuremberg and Tokyo tribunals to the most recent ad hoc hearings, senior leaders have been prosecuted for their actions in countries such as Bosnia, Cambodia and Rwanda.

Former Yugoslav leader Slobodan Milošević was tried by a UN court in The Hague for fomenting bloody conflict when Yugoslavia collapsed in the early 1990s. He died in his cell before the court could reach a verdict. His Bosnian Serb ally Radovan Karadžić and Bosnian Serb military leader Gen Ratko Mladić were successfully prosecuted and are serving life sentences.

Former Liberian President Charles Taylor was sentenced to 50 years after being found guilty of sponsoring atrocities in neighboring Sierra Leone. Chad’s former dictator Hissène Habré, who died last year, was the first former head of state to be convicted of crimes against humanity by an African court. He was sentenced to life imprisonment.