Is the Torico de Teruel a fake? The restoration after a fall raises the suspicion that it is a copy of the Civil War 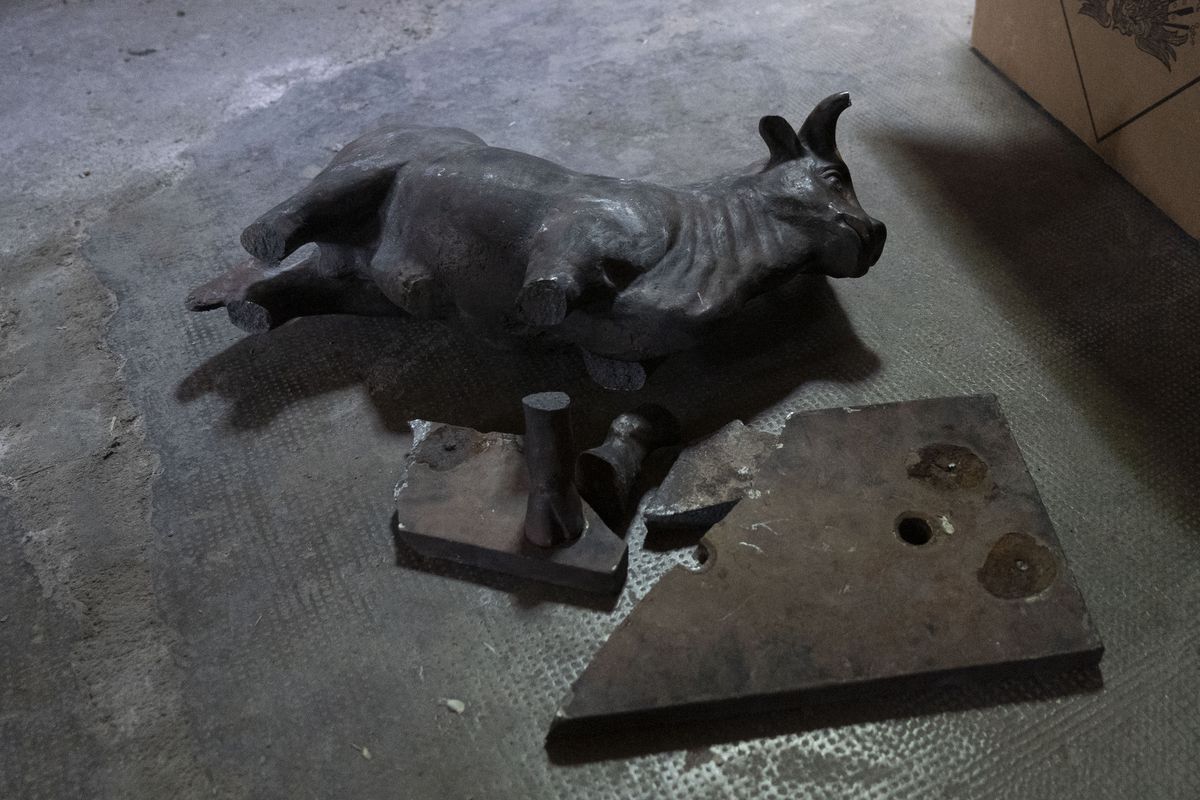 The Mayor of Teruel, Enma Buj, could not believe this Wednesday when she read the report on the restoration of the Torico, the highest symbol of the Aragonese Mudejar city, which fell from 11 meters last Sunday: the experts could not guarantee popular horned iron figure, chiseled in 1855, was the original. The study shows that there was “no” iron alloy at the time that they analyzed to proceed with their restoration. The city archives consulted also show that a century and a half ago the torico was cast in bronze and not in iron. Nothing is square.

Everything started last week. Between Monday and Sunday, the national congress of the rope bull was held in the capital of Teruel, and on the last day, around seven in the morning, four community workers removed the 23 ropes – one for each community participating in the event – that they had between the iconic sculpture, 45 centimeters long and weighing 55 kilos, laid out with the balconies of the square. When removing the one on one side, the tension caused the pillar on which the bull was sitting to fall to the pavement. El Torico therefore crashed against the cobblestones and suffered multiple fractures in the weakest points such as the horns and legs.

The city council then urgently commissioned a study to try to recover the sculpture as soon as possible. The surprise was huge, as the mayor admits to EL PAÍS. “I can only say that the report shows that the iron alloy analyzed did not exist in the 19th century and that I will inform you about it tomorrow [por hoy] to opposition groups. Those are the cold facts.”

El Torico is actually a fountain with a column on which the sculpture stands and at the base of which four small bulls’ heads serve as pipes from which the water flows. These figures are made of bronze. “It makes little sense that the whistles are bronze and the bull isn’t,” the councilman admits.

Known as the Battle of Teruel, it was a harsh military confrontation that began in December 1937. The pro-republic army laid siege to the city, which was then in the hands of the rebels, who did not surrender until January 1938, and a Francoist counterattack restored it to power a month later. During the war, Teruel was heavily bombed, including its cathedral, which suffered significant damage. El Torico was then removed from the pitch and no one knew of his whereabouts until the end of the conflict. Popular belief is that the figure was protected by a town family and returned after the war. However, according to the findings of today’s chronicler of the city, Vidal Muñoz, this did not happen that way, but the torico was hidden under a pile of coal in the town hall.

Antonio Jiménez, executive director of the Santa María de Albarracín Foundation, the body that coordinates the research team commissioned by the city council to analyze the damage, admits that he was “surprised” when he discovered that the bull was involved in the damage was made of iron, not bronze as it should be. “In my opinion, there could have been a change at some point during the civil war.”

Jiménez confirms that the expert commission’s report was handed over to the mayor on Wednesday. It states that the specialists propose that once the Torico has been repaired, it will be museumized and a replica built in the city. “The city council has to decide whether it should be iron or bronze,” he adds. The document also requires that a study of the whole be conducted to determine the condition of the entire fountain and that citizens have no access to the pillar on which the statue stands, which is very common during local festivals.

When was the Torico replaced? Nobody knows. The mayor assures that the investigation will continue. What is certain is that the city’s celebrations begin on the 1st and that on these days, for 40 years, thousands of citizens have gathered around the column in the square where the figure is located. “Now everyone is an engineer, but the truth is that the torico is a widespread and popular fountain in the city. There are celebrations around it at least twice a year,” acknowledges Councilor Enma Puj. “For example, at Christmas it is surrounded by a Christmas tree, a handkerchief is placed on it at parties, or a scarf is placed on it when the volleyball team wins the Spanish league. Sometimes it is illuminated for conventions or celebrations. Accidents do not have a single cause, they are always multiple. What happened could have happened at any time. Good thing there were no injuries. This is important.”

The opposition this week asked the city council for explanations on last Sunday’s fall. In Teruel, the pressure of the citizens is felt so that after two years of the pandemic, this time the celebrations can be celebrated as usual by putting a red cloth around the bull’s neck. But there is no Morlaco. The solution found, according to Antonio Jiménez, is to place an exact copy on the column, since a 3D replica was made a few years ago. Then when the Torico is restored by the Metalcin Foundry, based in Zaragoza, will replace the original if so. “We will continue to investigate until we find out the truth,” emphasizes the city council.