Is Jared Leto a cult leader? Learn about the island of Mars, which brought together hundreds 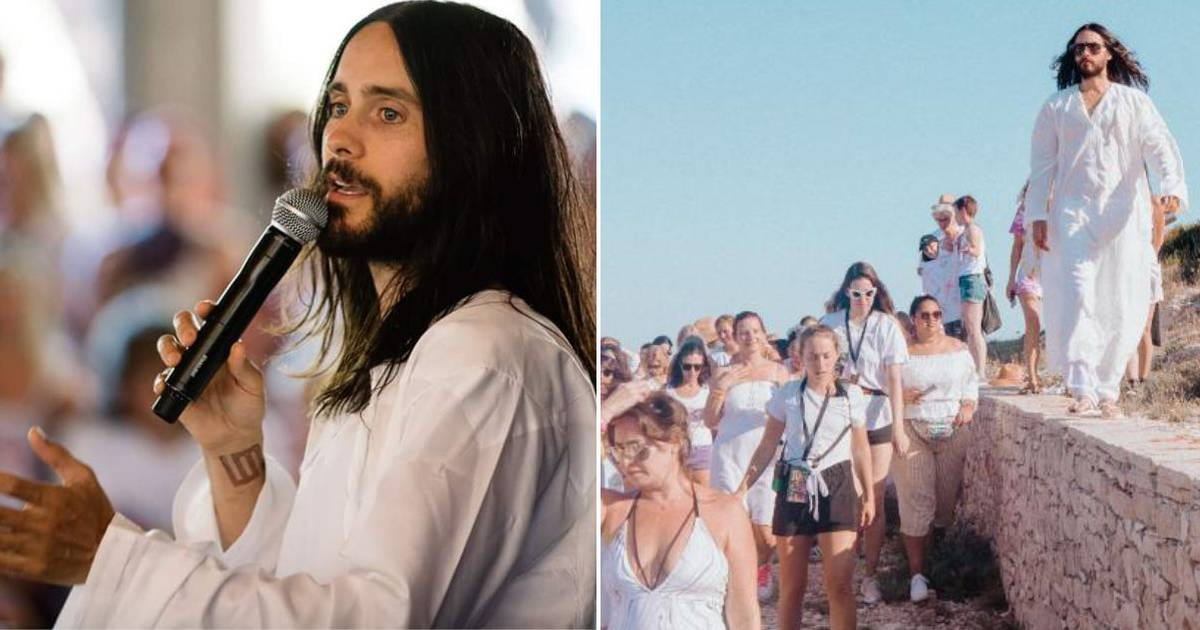 Besides being an actor, singer and leading man from the group 30 Seconds To Mars, Jared Leto He is also the leader of aworship”. At least that’s how he defines his musical group on Mars Island Festival.

During the summer of 2019, the group first organized this event on a private island in Croatia. It was a sort of exclusive three-day camp-festival.

During the broadcast, his fans – called “Echelon” – enjoyed, among other things, private concerts. However, The images of the meeting disturbed Internet users on social networks.

And it is that the postcards of the show, published on Twitter, seemed to come from a sect, which the group seemed to take as a joke and sparked controversy by declaring with the photos: “Yes it is a cult.

However, that wasn’t the only time they used that phrase to refer to the event.. There are Mars Island Festival merchandise with this statement engraved on itwhich alarmed more than one.

How is Mars Island, Jared Leto’s “cult” on an island?

The Isle of Mars Festival It is celebrated specifically on the island of obonjan. According to the band’s official website, it is a “An experience like never before.”

“Rest and regain strength with the yoga among the treesjump into the Adriatic Sea, watch a movie at midnight or look at the stars, and attend two intimate group presentations“, it was pointed out.

The site also stipulated that, in order to attend, worshipers had to cancel a ticket. The cheapest is around $1,700. Meanwhile, for a VIP, you need to shell out nearly $7200.

With the tickets, users are guaranteed to take part in two long-lasting concerts, activities with Jared and Shannon Leto; accommodation and also food, Croatian media reported.

Participants stay in air-conditioned tents for four persons. In addition, they have access to shared showers and toilets near each camp.

Notably, if someone wants to have their own bathroom in the tent, they have to pay extra. You will have to share it with your roommates anyway.

During their stay at the summer camp, visitors will also be able to enjoy massages, tattoos and an extra night on the island for other additional sums of money.

It is important to note that this festival did not start in Croatia. Since 2015, 30 seconds to Mars had celebrated the exclusive meeting, but in the United States under the name Camp March.

Since 2019, the festival landed on the Adriatic. At that time, it gathered more than 500 people who enjoyed various activities with the group, among which, listen to Jared Leto preach.

Through their Twitter account, the group shared a photo in which you can see a crowd of people dressed in white while they followed the musician dressed in a dress of the same color.

They also uploaded another one in which the artist seems to be preaching to the assembled attentive participants. In both cases, the famous emulates the popular representation of jesus christ with his see.

“MidsomMARS”: these are the reactions to the so-called cult of Jared Leto

Thanks to the photos of the meeting and the fact that the singer himself claimed that it was a “cult”, many began to refer to the event as a “spiritual retreat”.

There were even those who claimed that the scenes seemed taken from the horror movie mid summer. But there were also fans who claimed they had had the best three days of their lives.

“I have been in this sect since 2002 and I will never leave. It’s my house», « Yes, it is a sect and here is the prophet: Jared Leto » and «Yes it is a cult and I am proud to say that I am one of the believers. Thank you for the best 3 days of my life”, were some positive comments.

On the other hand, some criticisms are:Jared Leto can start a new religion. Is this the idea of ​​Camp Mars?“, ” It’s hilarious. looks like some kind of thing get out”, “MidsomMARS”, “Charles MARSon”, “So the gang is running a cult now?“, “He looks like mid summerand “It’s like a parallel universe where Charles Manson saved the Fyre Festival”.

After the quarantine due to the coronavirus pandemic, the island of Mars retreat festival was due to return to Croatia in 2022. However, there has been no announcement about it.

So it looks like fans will have to wait a bit longer to pay again in order to isolate yourself on an island with 30 Seconds To Mars, enjoy their music and learn about their worship.

It should be noted that the ticket to attend the island of Mars does not include the flight to Croatia or transport to the island, therefore, interested persons must pay for it individually.