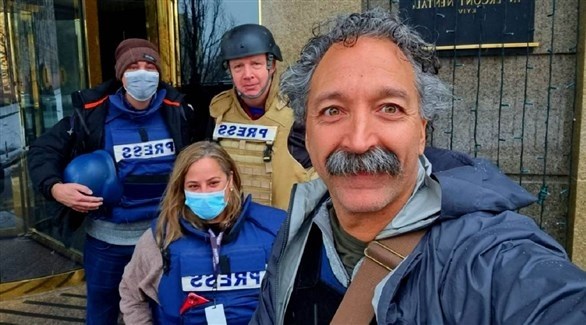 A French-Irish cameraman and a Ukrainian television producer working for Fox News were killed near kyiv, the US network reported on Tuesday.

In a statement, Fox News Executive Director Susan Scott confirmed the murder of photographer Pierre Zakrzyevsky and Ukrainian journalist Oleksandra Kovchinova, and the injuries of their colleagues, Benjamin Hall, when the vehicle they were in was hit by gunfire. in Hornica, near kyiv, on Monday.

Scott noted that Hall, a British correspondent for the network at the Foreign Office, is still in a hospital in Ukraine.

Zakrzewski, the Irish-French, has been covering the war in Ukraine since it began in February.

A relative described him as “a warm-hearted traveler who initiates beautiful encounters. He was humble and human and did not lose his sensitivity over the years,” adding that he “helped find shelter for a baby who was found after the bombing.” .”

She said she knew Pakistan and India up close and took “great pictures, especially of the Kashmir conflict,” as well as having long experience in Afghanistan, where she covered the war against the Soviets and the return of the Taliban.

Fox News reported that Zakrzewski played a “key role” in getting Afghan journalists working with the network out of the country with their families after the US withdrawal.

Scott said, “Pierre was a war photographer who covered nearly every international news story for Fox News from Iraq to Afghanistan to Syria during his long time working with us,” noting that “his passion and journalistic talent are unparalleled.”

Fox News presented Zakrzewski last December with an award in recognition of his work at its annual Spotlight Awards for employees.

Zakrzewski left behind a wife named Michelle who works directing and producing documentaries, according to his relative.

Scott also paid tribute to his colleague Kovchinova, who judged him, saying that while working with the Fox News team, she was known as a “hard-working, joyful, brave soul.”

“His dream was to connect people from all over the world and tell their stories, and he achieved this through his journalistic work,” Scott said, adding that confirmation of his death was delayed out of respect for his family.

Irish Prime Minister Michael Martin offered his condolences to the families of Zakrzyevsky and his colleague, tweeting his “condemnation of Russia’s indiscriminate and immoral war against Ukraine.”

For his part, IPI deputy director Scott Griffin said the two journalists “bravely risked their lives” so that the world “understands the horrible truth of what is happening in Ukraine.”

“We renew our call to the armed forces to do everything in their power to guarantee the safety of journalists,” he added.

On Twitter, Reporters Without Borders called on the parties to the conflict to “avoid attacking journalists.”

And on Sunday, American journalist Brent Reno was also killed, and his partner Juan Arndondo was wounded in Irbin, one of the kyiv neighborhoods that witnessed one of the fiercest battles since the beginning of the Russian invasion of Ukraine.