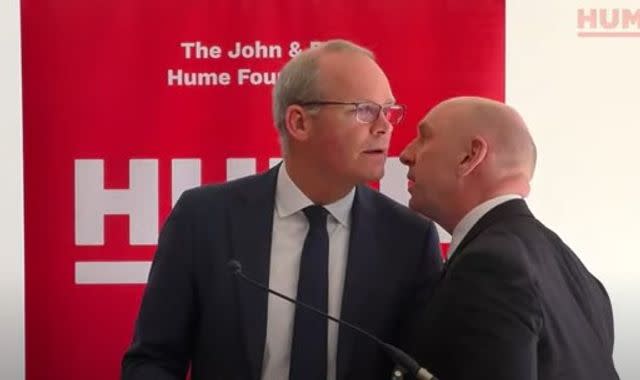 A suspicious device that forced Irish Foreign Secretary Simon Coveney off stage during a speech in Belfast was a hoax “designed to cause maximum disruption to the local community”, police say.

Pro-British militant groups were likely behind the hijacking and planting of the bogus device in a van whose driver was ordered to go to an event Coveney was speaking at on Friday, officials said.

The device planted by the two gunmen, Assistant Police Chief Mark McEwan said at a news conference, adding that he would not speculate on the motivation for the crime.

He said the driver of the vehicle thought he was being forced to carry a bomb.

“Just think about it, the victim believed at this point that he was driving a van that contained an active bomb and that his family was being threatened,” McEwan added.

“The local community was also affected. More than 25 homes were evacuated, local schools were affected and vulnerable residents of a local nursing home had to be moved to another part of their home.”

And he asked for information on any person who had information about the event, armed men or movements of the truck, so that they present themselves to the police.

The event was organized by the John and Pat Hume Foundation and Sky News knows that Mr. Coveney arrived at his address five minutes before he was escorted out of the premises and the rest of the attendees were evacuated through the back of the building.

Coveney left the stage in a hurry and, responding to the security alert on Twitter, wrote: “In Belfast with @Humefoundation to honor John and Pat’s legacy of peace for all communities.

“Saddened and frustrated that someone has been targeted and victimized in this way and my thoughts are with him and his family.”

The Irish Foreign Minister spoke at The Houben Centre, on Crumlin Road, to address the Building Common Ground event.

Tim Attwood, chairman of the foundation, told Sky News the incident is “very frustrating for the local community and there may have been a funeral that was disrupted”.

“It is very disconcerting that a major event on the subject of building common ground, seeking to build relationships in Northern Ireland, has been suddenly ended by a bomb alert,” he said.

“This is the first physical event that the foundation has organized in Northern Ireland due to COVID. The days of violence or threats of violence are behind us.

“The Pat Hume Foundation is committed to the values ​​of peace and we continue on our path of peace and reconciliation.”

A bomb disposal robot was later photographed at the scene.

At the time of the incident, the Northern Ireland Police Service said they were “attending a security alert in the Crumlin Road area of ​​North Belfast” as they advised motorists to “avoid the area and look for alternative main routes for your trip”.

A spokesman for the Irish foreign minister confirmed that he and his team are safe, adding: “They have been taken to safety and the PSNI is doing its job.”

A funeral that was being held at the nearby Iglesia de la Santa Cruz was also interrupted as a result of the security alert.

John Finucane, MP for North Belfast, said the incident was “disgraceful” and those behind the “van hijacking had no place in society”.

“While they try to bring back the past, we will continue to work for the future,” he wrote on Twitter.

His thoughts have been echoed by Northern Ireland politicians, including Sinn Fein Stormont leader Michelle O’Neill, who has condemned those behind the attack.

“Those who are determined to cause instability and disruption will not succeed. Those of us committed to peace will not be deterred,” he said.

DUP leader Sir Jeffrey Donaldson said people “want to get on with their lives and have no relationship with those who cling to violence”.

Meanwhile, the Archbishop of the Church of Ireland, the Rev John McDowell, said the incident was “disgraceful”.

Secretary of State for Northern Ireland Brandon Lewis said he was aware of the security alert and tweeted his “solidarity” with Coveney.