Iran missiles in Erbil .. “declaration of war” and Iraq is threatened with sanctions 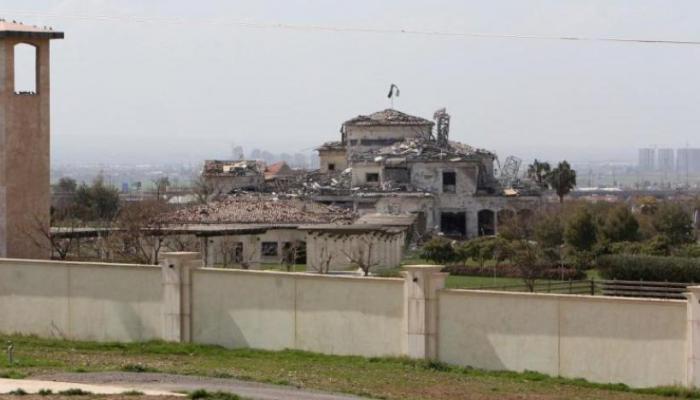 Experts on Iraqi affairs considered the Iranian missile attacks on Erbil a dangerous turn in the course of the confrontation between Tehran and Washington.

According to security sources, the city of Erbil was hit with 12 ballistic missiles, which targeted populated areas and sensitive buildings, including the US consulate and Erbil International Airport.

Hours after the attack, the Iranian Revolutionary Guards militia officially embraced that operation, saying it was targeting a strategic center for Israel in the city of Erbil.
For nearly two years, the city of Erbil has been the target of rocket attacks from time to time, some of which were carried out by drones, and armed militias affiliated with the pro-Iranian mob were behind them.
State forces close to Iran have escalated their attacks against US diplomatic missions and interests in Iraq since early 2020, following the assassination of terrorist Qassem Soleimani, commander of the Iranian Quds Force, and Abu Mahdi Al-Muhandis, in Baghdad International. Airport after an American air attack.
The recent Erbil incident is the first of its kind that Iran has publicly and explicitly embraced.

These attacks come under the impact of the political changes taking place in Iraq and the international events that followed the outbreak of the Russo-Ukrainian war and the repercussions of the alignment between the Eastern and Western sides.
A member of the Kurdistan Democratic Party, Muhammad Zangana, told “Al-Ain Al-Akhbar” that “the missile attack on the city of Erbil was a terrorist operation against the sovereignty of Iraq that occurred at important and sensitive moments. “
Zangana held the Iraqi government responsible for these and previous attacks, accusing it of “laxity in security”, which was prepared for the continuation of these serious and important violations.
Yesterday, Saturday, Kurdish leader Massoud Barzani presented an initiative to gather views to remove the political deadlock in the Iraqi crisis, as a result of the ongoing dispute between al-Sadr and the forces of the coordination framework, which includes affiliated armed factions. with Iran
On the eve of the missile bombardment of the city of Erbil, a breakthrough appeared on the Iraqi political horizon to resume negotiations and move the deadlock between the parties, following a phone call made by al-Sadr with his arch-rival, the chief of the State of Law coalition, Nuri al-Maliki, one of the most prominent parties in the framework of coordination of the forces.
And the Counter-Terrorism Service in Iraq’s Kurdistan Region announced in a statement that an attack with “12 ballistic missiles” targeted Erbil, the region’s capital and the US consulate there, in the early hours of Sunday, adding that the missiles were launched “from outside the borders of the Kurdistan Region and Iraq, specifically from the east,” indicating neighboring Iran.
Pronouncements of local and international condemnation and denunciation of the missile attack continued, including the position of the United States of America, in which it demanded “that the Iranian regime be held accountable for the flagrant violation of Iraqi sovereignty.”
This comes at a time when Muqtada al-Sadr has called for an official note of protest from the United Nations and Iran regarding the Erbil attacks.

Political analyst Kazem al-Juhaishi says that “the Erbil attack is an explicit declaration of war by Iran, which is using Iraqi territory to liquidate its positions with Washington.”
Al-Juhaishi added to “Al-Ain News” that “what happened is a clear and explicit violation of good neighborly pacts and international security norms, which dictate that there be international action regarding Tehran’s insistence on use Iraq as a lease for their regional wars.
In the opinion of political analyst Ihsan Abdullah, targeting the city of Erbil with missiles is inseparable from current events in the world, especially what is happening in Eastern Europe.
Abdullah explained, during an interview with “Al-Ain News”, that “Iran sought, through its ballistic attacks in Erbil, targeting the US Consulate, to send urgent and rapid messages to Washington that its weapons in Iraq are capable of threatening to Washington.” interests if he insists on continuing to support Ukraine in its war with Russia.
He continues, saying: “The repercussions of that war seemed to appear clearly and clearly when moving from insinuations and attitudes to statements and violent actions on the ground, beyond the borders of the capitals Moscow and Kiev”, noting that “the intersection of interests in light of the fires of battle forced Iran to reveal its coaches and return the players to the back.”
Regarding the repercussions of the attack on Erbil, specifically on the US Consulate, the legal expert, Ali Al-Tamimi, points out that “Iraq is obliged to protect the diplomatic missions that operate in its territory, otherwise it may be object of international sanctions”.
Al-Tamimi explains to Al-Ain News that “Iraq can apply to the United States of America in accordance with Article 27 of the 2008 Iraqi-American Joint Defense and Cooperation Agreement, and Iraq can notify the Security Council in accordance with articles 39 to 50 of the Charter of the United Nations and article 102 and asks you to act.
The Iraqi parliament can hold an emergency session to discuss this aggression and declare the emergency in accordance with articles 58 and 61 of the Iraqi constitution, according to the legal expert.
Security sources confirmed that 3 missiles landed in the vicinity of the US Consulate near Erbil airport, and another 4 in residential areas, including the house of the director of the (Kar) Engineering Construction Company, and one of them near of the Kurdistan 24 satellite building.
Meanwhile, Erbil Governor Omid Khoshnaw confirmed that the missiles failed to hit their targets and there were no casualties.