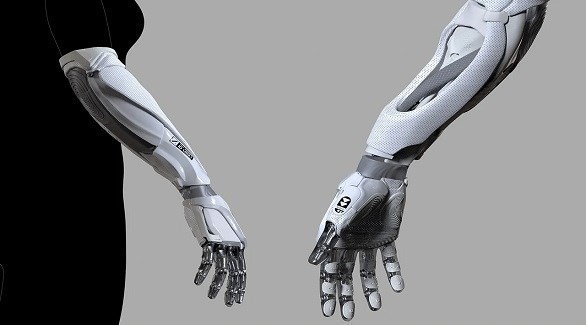 The Smart Prosthetic Arm is a wearable design concept that integrates artificial intelligence and smart technology into the construction of a prosthetic.

The magic of prosthetic design lies in its ability to bring life experiences to those with arthritis and missing limbs. While prosthetics have made great strides in product development since their inception, smart technology heralds a new era in prosthetic design to harness their great potential in health care.

The robotic look also helps normalize the use of prosthetics in public places. Designed in optical white and slate black, the digital interface wraps around the crease of the elbow prosthesis that acts as the intelligent hub of the prosthesis.

Users can use their hands to scroll through system alerts and settings to enhance their prosthetic arm experience. Features like a fitness tracker, clock, and calorie counter can be found in the smart digital hub that users can access at any time.

Flexible components also connect the different parts of the smart prosthetic arm to allow for comfortable movement. The smart digital display is connected to the prosthetic forearm and fingers by a flexible component that also reduces the amount of materials needed to build the prosthesis, according to Yanko Design.