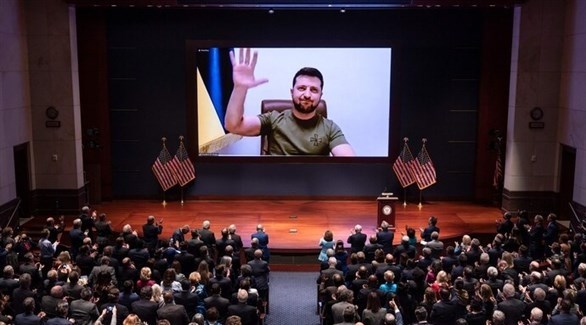 Ukrainian President Volodymyr Zelensky sent an emotional appeal to US lawmakers on Wednesday calling for further Western intervention against Russia, which he said its military operation in Ukraine was going “successfully” despite the West siding with kyiv by providing weapons and imposing sanctions on Moscow while the International Court of Justice ordered Russia to stop its invasion. .

Ukrainian President Volodymyr Zelensky compared the horror of the Russian war in his country to the attacks on Pearl Harbor and the 9/11 attacks, in a video addressed to the US Congress on Wednesday, calling on the president of the US to be a “leader of peace”.

“This is a horror that Europe has not seen, and has not seen for 80 years,” Zelensky said. “Remember Pearl Harbor, the terrible morning of December 7, 1941, when the planes that attacked you blackened the sky,” he added, recalling the air raid that brought the United States into World War II.

He continued: “Remember September 11, 2001, when evil tried to turn your cities and independent lands into battlefields. Our country witnesses the same thing every day.”

The Ukrainian president reiterated his call for the United States and NATO to establish a no-fly zone over Ukraine “so that Russia cannot terrorize our cities.”

Putin: The operation was a success
For his part, Russian President Vladimir Putin assured on Wednesday that his military operation in Ukraine was “successful” and explained that Moscow will not allow this country to become a “platform” from which to threaten Russia.

Putin compared the Western sanctions imposed on Russia, its economy, its athletes and its culture to the “persecution” of Jews, denouncing the “outrageous” and “improper” behavior of Westerners.

“The operation is proceeding successfully, in strict accordance with the pre-established plans,” Putin said during televised remarks, stressing once again that he does not seek to “occupy” Ukraine. He noted that he launched the attack because “all diplomatic options” had been exhausted.

On the diplomatic side, the Kremlin said on Wednesday that “Ukraine’s neutrality along the lines of Sweden or Austria is the option currently being discussed (by the negotiators of the two countries), which can be considered a settlement”, but kyiv quickly announced his rejection. of this proposal.

Russian Foreign Minister Sergey Lavrov said “there are very specific formulas that I think will soon be the focus of an agreement,” while noting that the talks “are not easy.”

- Advertisement -
Share
Facebook
Twitter
Pinterest
WhatsApp
Previous articleDirector of LVMH, Bernard Arnault, could extend his mandate until he is 80 years old
Next article“The Perfect Dinner”: Host Zafi is “about to quit” after one misstep