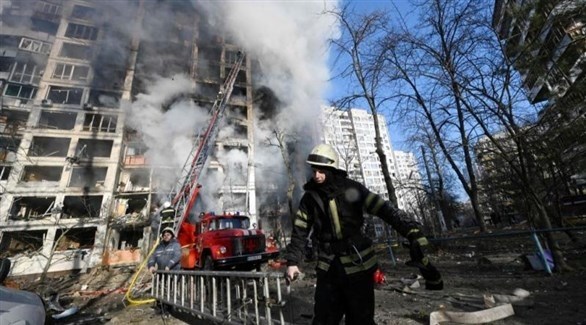 Mykolaiv was the target of several Russian airstrikes on Saturday, a day after dozens of soldiers were killed in an attack on an army barracks in the southern Ukrainian city, according to the region’s governor, Vitaly Kim.

“We cannot warn about air strikes because this bombing typhoon hits before us, the warning message and the bombing happen simultaneously,” Kim said on social media.

The governor did not provide details on the extent of the damage or the number of possible victims.

At the same time, witnesses reported mixed estimates of the death toll from six missile strikes that targeted a military barracks north of this city on Friday.

On Saturday morning, Vitaly Kim announced in a video clip posted on Facebook that the Russians “cowardly carried out missile attacks on sleeping soldiers, and the rescue operation is still going on.”

AFP reporters at the scene saw three dead, including a torn body pulled from rubble where rescuers were working, and one survivor found.

According to soldier Evgenich at the site, 200 young soldiers were present in this barracks and “at least 50 bodies were recovered” from the rubble.

A colleague estimated the death toll could be as high as 100.

“We are still counting, but it is impossible to know from the state of the bodies,” a rescue worker told AFP.

Ukrainian media quoted the mayor of Mykolaiv, Oleksandr Senkevich, as saying that the city, which had a population of about half a million people before the war, was bombed from the neighboring Russian-controlled Kherson region.

Mykolaiv is a strategic city because it is the last one before the city of Odessa on the Black Sea coast.