Instructions: The ideal vase and how flowers can best be displayed – style 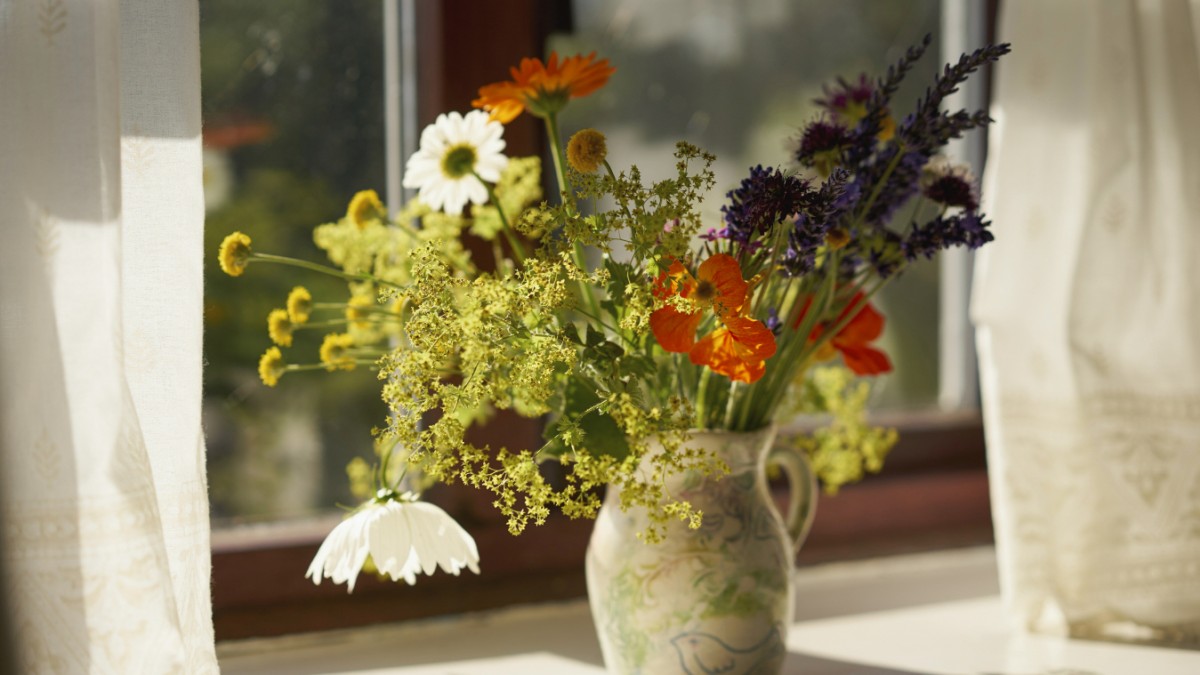 On the kitchen table red tulips shine in a glass jar from the flea market, in the living room pink quinces gradually unfold on long branches in a jar, on the bedside table the sight of delicate heads of roses calms the head in crisis before falling asleep. When the world is furious, you need even more than usual: fresh flowers. There are a few tricks to help ensure that tabletop colors look particularly good and stay beautiful for a long time.

A Handful of Bunt is the perfect getaway from world events. Yellow and blue, pink and violet: the old rascal Spring knows very well that bright colors make the heart beat faster. Karin Heimberger also has onion flowers in the vases depending on the season, such as tulips and daffodils, buttercups and freesias, “they open up little by little and smell wonderful”. The publisher of the flower magazine designed with love. let it bloom has been watching how ideas about the perfect bouquet have changed for several years, moving away from the rigidly arranged bouquet towards loose, natural-looking bouquets or even individual flowers in the vase. She recommends to anyone who wants to put together her own bouquet: “It’s best to put foliage in the vase first to create a frame. Then it’s easier to arrange individual flowers.”

Which vase for which flowers?

Karin Heimberger believes that you can never have enough vases. “What other shoes are, vases are to me,” says the Munich native. However, a few classic shapes are enough for a balanced variety; the more unusual ones, like Alvar Aalto’s wavy glass vase for Iittala, are difficult to fill.

The Bulbous Vase: Lush bouquets look good in bulbous vases; the stems have enough space and the flowers appear without sticking. It’s perfect for heavy blooms like peonies or hydrangeas that need edge support.

The tall, straight vase: here, the minimalist or loose bouquets fall to the side, but don’t spread out. Single flowers with erect stems or twigs, like the bright yellow forsythia, are also right at home here.

The pitcher: You can find a wide variety of vases of this type in the market. Although they take up a lot of space in the kitchen cupboard, long-stemmed plants like lilies, gladioli, or grasses are especially effective. When arranging, it is better to cross individual stems so that the bouquet stands up better. If you don’t have the heart to throw away your favorite leaky vase: simply place an empty jam or pickle jar and hide it in the vase as if it were a vase.

For minimalists: For a better hold, florists like to use a spike, a round piece of metal with nails that is driven into the ground and onto which individual stems can be strung. There are also additional Ikebana vases with an insert into which individual flowers are placed. However, you can also hold the flowers by gluing criss-cross (florist’s) tape over the opening of the vase like a grid. Alternatively, you can crumple up some rabbit wire, lay the frame on the ground, and use the openings in the metal for support.

Mini vases: Whether it’s a uniform designer ensemble or a flea market jumble, mini vases in different shapes and sizes are suitable for smaller flowers like bluebells, primroses, grape hyacinths or forget-me-nots. There’s also room for broken flowers, reminders of a midday stroll, or remnants of wilted flower bouquets.

How does a bouquet stay beautiful longer?

While it’s still cold outside, many varieties first have to get used to the warmer room temperature. British flower expert and author Louise Curley (“Fresh Flowers!”, Gerstenberg-Verlag, currently only available used) advises wrapping tulips in newspaper for a few hours and placing them in a bucket of water. This should keep them nice and straight longer. The tulips continue to grow in the vase. You can slow them down a bit by not giving them too much water at once. Alternatively, you can carefully pierce the stems below the flower with a needle.

Beat thick, woody stems of rose or lilac for the vase; Louise Curley, on the other hand, doesn’t think so. Rather, it makes it more difficult for the stems to absorb water and provides food for bacteria through particles floating in the water (so always remove the lowest leaves before putting flowers in the vase!) . Best: Cut at a flat angle and divide about 1 inch deep in the middle. Flowers like poppies, roses or dahlias stay fresh longer if the tips are dipped in hot water for a few seconds, says Curley.

Speaking of water: in addition to the preservative from the florist, some bet on a little sugar and a dash of (apple) vinegar or a crumb of aspirin. In fact, the best trick remains: clean the vase every other day, cut off the freshly cut stems and change the water. Everybody knows it, but nobody knows it. If you buy daffodils, it’s best to place them separately in a vase after cutting, as they secrete a mucus that other flowers can’t easily remove. Bouquets should not be placed too close to fruits and vegetables, because some varieties release the ripening gas ethylene, which causes the neighbors to wilt faster.

When the flowers have finally faded, you and your next bouquet will be very happy if the vase is really clean. Debris left behind by plant stems harbors bacteria that shortens the life of cut flowers. Old home remedy, because not all vases can go in the dishwasher: add water and undiluted table vinegar or two or three tablespoons of citric acid or baking soda for a few hours, then rinse.

Where is the best place to buy your flowers?

Long transport routes, pesticide reinforcements, exploitation of people and nature: if you want to have flowers at home, you may also wonder under what conditions they were grown and if the rose from Ecuador is really a sensible purchase. The pleasure of flowers: sometimes that means going without them, just like you don’t buy the plate of strawberries in December. However, many florists are increasingly focusing on seasonal and regional flowers (including slowflower-bewegung.de).

British Louise Curley, on the other hand, encourages gardeners to grow their own cut flowers and recommends dahlias, sweet peas, cosmos flowers, cornflowers, delphiniums and sweet peas to start with. Unfortunately, such bursts of color still take a bit of time before we enjoy them. Until then, what composer Max Reger said applies: “It works without flowers, but not so well.”