Independents call for ban on speaking co-official languages ​​in Congress 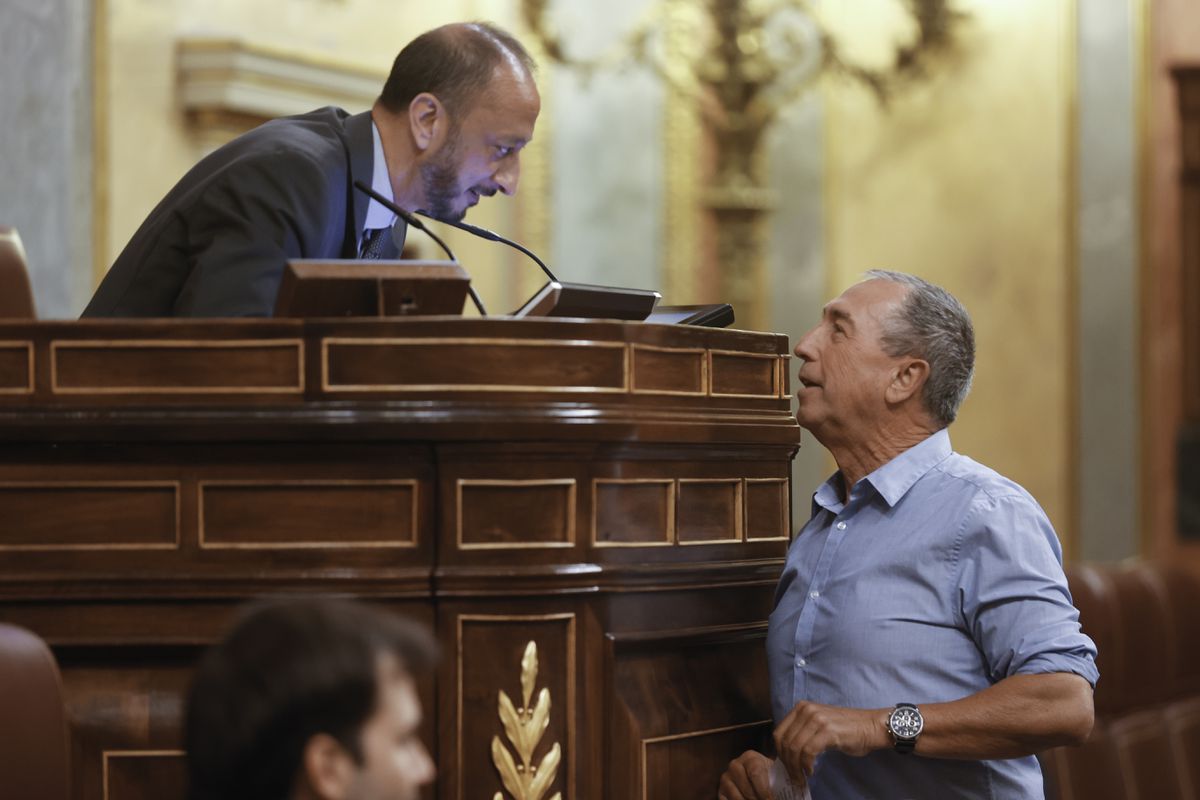 Never before have the different languages ​​of Spain rang out as loudly as they did this Tuesday between the walls of the plenary hall of the Congress. They spoke Catalan, Galician, Basque, Aragonese and Asturian. It was a challenge, led by nationalist groups, against the House Rules, which only allow the use of Spanish. And confusion was guaranteed, as its supporters wanted to use it to reinforce their claim that all languages ​​of the Autonomous Communities could be spoken in Parliament. The most recalcitrant such as ERC and Junts resulted in the word being withdrawn. PNV, EH Bildu and PDeCAT used the trick of translating themselves to avoid the Presidency’s intervention.

The use of the co-official languages ​​is only permitted in the Senate. In Congress, nationalist groups typically insert paragraphs in the languages ​​of their respective territories, a practice the presidency allows as long as it doesn’t go beyond a few sentences. This Wednesday, in a plenary debate, all nationalist groups alongside En Comú Podem tabled a proposal to reform the chamber rules to include the possibility for MPs to speak in any co-official language. The proposal was doomed to failure due to opposition from the PSOE and the right, so its main supporters decided to turn the plenary session into a form of protest, aware that they would clash with the presidency.

ERC’s Montse Bassa opened fire, who started in Spanish only to immediately switch to Catalan. “We’re fed up with not being able to speak our language,” he protested. In the absence of the President, Meritxell Batet, it was up to the First Vice-President, also a Socialist Alfonso Gómez de Celis, to deal with the situation, who was patient. Gómez de Celis tried to understand Bassa and the other deputies who emulated her. “I can understand what they’re doing, but the rules don’t allow it,” the accidental president warned. “Speak in the common language so that we all understand you, even Andalusians like me,” asked Gómez de Celis.

The ERC Deputy ignored the requirements and on the third notification they withdrew their word. Bassa continued speaking with the microphone switched off and remained in the gallery for a few minutes. After a brief conversation with the President, he finally went to his seat. He was then followed by Miriam Nogueras of Junts. She spoke Catalan and the truth is that almost everyone seemed to understand her. At one point he said: “If our language doesn’t fit here, neither do we.” And from the seats of Vox came a cry: “Perfect!” Nogueras followed the same path as Bassa, as did Albert Botran of the CUP and the Galician of BNG Néstor Rego.

Others dodged the ban with a ruse first shown by PDeCAT’s Ferran Bel. His speech had a certain humorous tone, as evidenced by the smiles of Gómez de Celis himself and even staunch political rivals like José María Espejo from Ciudadanos, who sarcastically commented on his “perfomance“. Bel pronounced a sentence in Catalan and then translated it into Spanish. “What I’m doing could be done simultaneously with translators over headphones,” he illustrated.

The same formula was chosen by Joseba Agirretxea of ​​the PNV; Mertxe Aizpurua from EH Bildu and Joan Baldoví from Compromís. Four speakers from the group United We Can spoke, including Pablo Echenique, who spoke a few words in Aragonese, and Asturian Sofía Castañón, who interspersed phrases in her country’s language and Galician. Basque Roberto Uriarte and Catalan Joan Mena only used Spanish. The latter was most critical of the PSOE’s refusal to accept the proposal. “It’s common sense that everyone can speak in their own language. If you’re not clear about that, then you have a problem,” Mena told the socialists.

There was no lack of words in Catalan in the interventions of Juan José Aizcorbe from Vox and the liberal Espejo. The groups on the right agreed that it was a contradiction that the use of Catalan is required in Congress while Spanish is restricted in schools in this community. They all also appealed for the expense that assembling a translation team would entail and defended “the right of every Spaniard to understand the interventions of his MPs”. The popular Miguel Ángel Jerez accused the nationalists of wanting to “Balkanize” the Congress. For the PSOE, the Galician MP Guillermo Meijón limited himself to recalling that the Senate, as a territorial chamber, is the place where the use of co-official languages ​​is allowed and highlighting the loss of speakers suffered by Galicia’s own language Years in which the current leader of the PP, Alberto Núñez Feijóo, presided over the autonomous government.

After the plenary session, the signatory groups of the initiative read out a manifesto in which they point out the “critical” situation of the co-official languages ​​and denounce an offensive of “Spanish linguistic superiority thinking”. According to these formations, the use of languages ​​other than Spanish in the Senate is “anecdotal” and their introduction in Congress would mean “an act of justice” and recognition of linguistic diversity and “plurinational reality”.

- Advertisement -
Share
Facebook
Twitter
Pinterest
WhatsApp
Previous articleAl-Khelaïfi assures they have ‘never’ spoken to Zidane and clarifies that Galtier is the chosen one
Next article99 percent of the 7,809 games analyzed by LaLiga last season were free of match-fixing