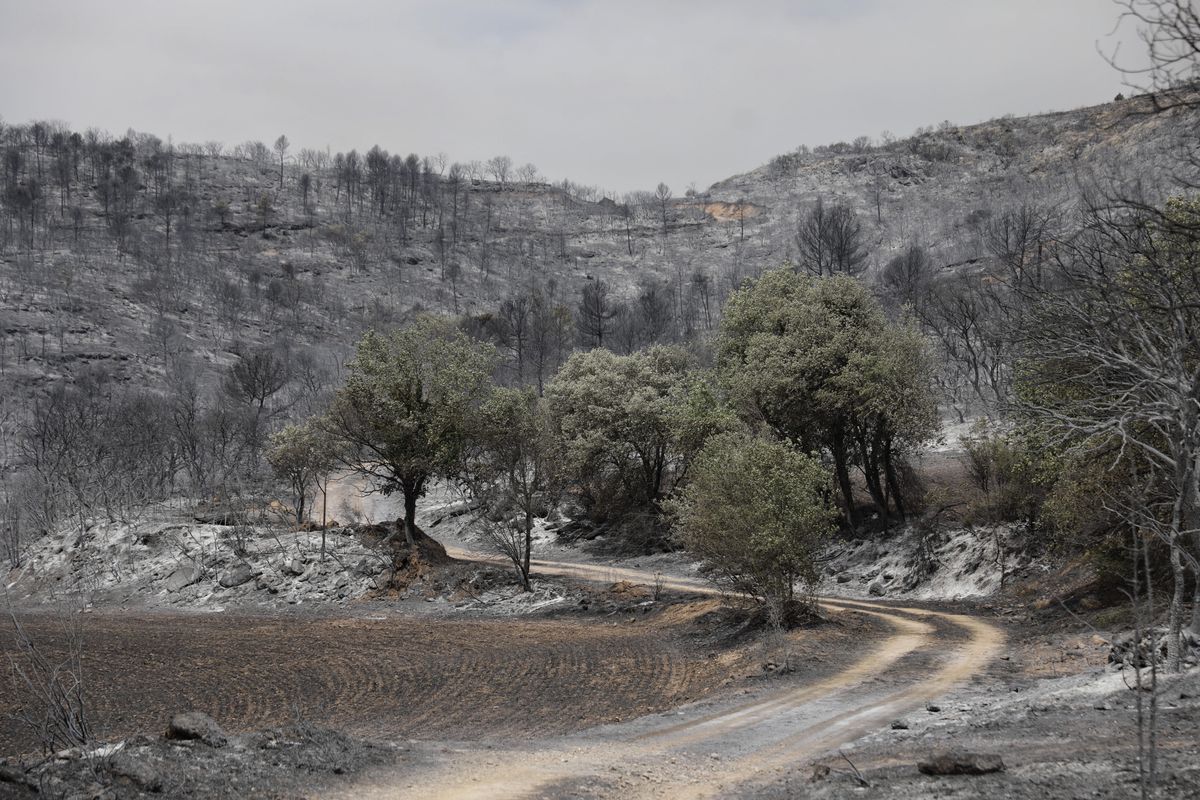 The wave of fires that recently devastated Catalonia, more than 230 in five days, has shown that firefighting teams’ responsiveness is compromised when fire spreads out of control from multiple sources simultaneously. The dreaded “simultaneity” to which the firefighters allude confirms their ability to disrupt strategies of frontal attack on the flames and supports the twist given to the intervention device: the fire is left to burn and awaits where it can really stop it . “The firefighter used to go where there was a fire and try to put it out as quickly as possible, but now the strategy goes further because it’s about getting people where it’s effective,” explains Asier Larrañaga , sub-inspector of the GRAF, a unit specialized in measures in the forest environment.

With the forests severely stressed by the lack of water and swollen by the accumulation of vegetation with fuel, the technicians defend that the change in tactics must be understood. “We don’t let it burn for no reason, but reserve the right to have the resources available where we’re going to be really effective,” says Larrañaga. During the recent fires in Artesa de Segre and Solsonès, some neighbours, mayors and volunteers from the ADF (forest protection associations) raised the tone against the actions of the firefighters and criticized an alleged laziness on the attack front. “It’s true that the best time to put out a fire is when it’s starting to burn, but you can’t have a firefighter every hundred yards. When someone witnesses the outbreak of a fire up close, they have the feeling that it takes a long time for the fire crews to arrive, but that is usually not the case,” says the GRAF deputy commissioner.

The head of the GRAF is Marc Castellnou. Twelve years ago, during an intervention in the parliamentary commission of inquiry into the Horta de Sant Joan fire in which five firefighters died, Castellnou, one of the most internationally renowned experts in forest fire management, warned against rethinking firefighting strategies. “If you authorize me to make the decision to stop a fire because the risk is too high, believe me, I will make it more than once,” Castellnou snapped at MPs.

The passage of time and the greater virulence of fire episodes have strengthened this argument. “What can a firefighter do with a hose when a fire with flames more than five meters high is approaching?” asks Larrañaga. The approach has changed to defining a potential fire area and putting the red line at critical points. “We establish some boundary axes and mark the points where we can anticipate the fire and prevent it from going from big to huge,” says Larrañaga. And he illustrates this with the data firefighters considered in the latest Artesa-Baldomar scenario: “The fire could destroy 20,000 hectares and we estimated we had the capacity to keep it at 5,000. It ended up being less, but if we just make it 400, it’s possible they would have burned the 20,000 at the end.

The Pau Costa Foundation is an entity created after the Horta de Sant Joan disaster (it bears the name of one of the deceased firefighters) dedicated to fire prevention. Forest engineer Luis Beviera is one of its promoters and explains that this change in the virulence of the fires was noticed more than a decade ago. “We have noticed that they are becoming more and more extensive. The forest area had increased significantly due to the abandonment of agriculture and ancestral rural practices, such as using forest biomass for heating,” explains Beviera, who is also head of the Balearic Islands Forest Management and Soil Conservation Service.

Beviera points out that the progressive abandonment of agriculture has also left the areas around the towns vulnerable, as they have been covered with vegetation and, on top of that, filled with second homes. “The danger is no longer that trees are burning, but people,” he warns. And he explains that in the event of a simultaneity of fires, like the one that hit Catalonia last week with an average of 45 fires a day, the resources available must be used well to fight the flames. “You have to calculate where you can be more effective and prioritize the cross with the greatest potential…” he adds. Above all, the previous work stands out: “It must be clear that extinction is the answer, but prevention is the solution.” And it points to the great challenge for present and future generations: “Adapting our landscape to climate change, agroforestry areas make it more resilient.” One of the key solutions, he believes, will be to boost forestry, which is sometimes so vilified by the conservation sector. “The urban world needs to learn that planting trees helps create forests, but the chainsaw helps save them. What we don’t manage burns,” he says.

A new climatic era of fire and drought

“This is absolute proof. It is a proven scientific fact that heatwaves are increasing significantly and will continue to do so in the coming decades,” says Jofre Carnicer, lead author of the Mediterranean chapter in the latest report of the United Nations Intergovernmental Panel on Climate Change. (IPCC). Also Professor of Biology at the UB and CREAF researcher, explains that the Mediterranean basin, and therefore Catalonia, is an area particularly sensitive to climate change and that the fires will particularly hit the community due to the enormous forest mass that covers Catalonia. As will the drought, which will result in a shortage of water for human consumption in vulnerable areas. These are not future scenarios, but present scenarios: 20,000 people in the Les Garrigues region were without drinking water for three weeks in 2022, the Catalan reservoirs are now 30% emptier than the average for the decade and last May was the case at its hottest in the world Community while data is available.

- Advertisement -
Share
Facebook
Twitter
Pinterest
WhatsApp
Previous articleIs The Paper House: Korea worth watching? Differences and similarities with the original series
Next articleUnited We Can ‘concerned’ lack of agreement between parliamentary allies to repeal ‘gag law’