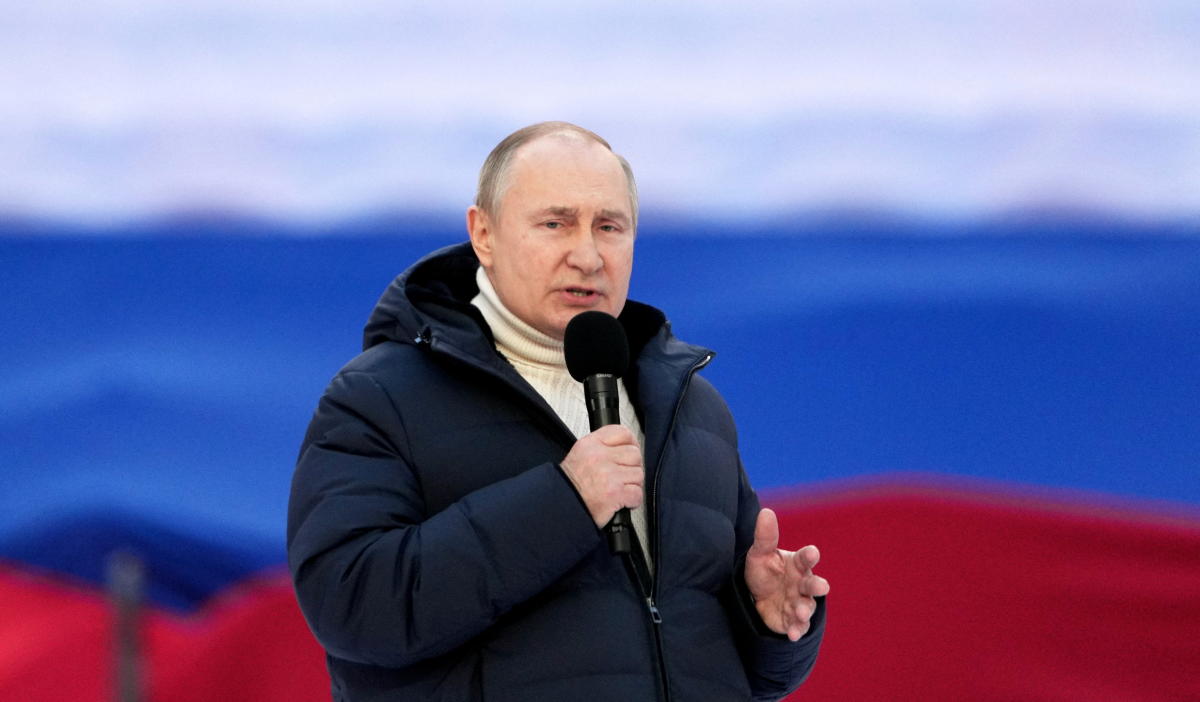 The war in Ukraine has been going on for more than three weeks. Secret service agents in the West identify supply problems with the Russian military. On the other hand, Putin praised his troops, until state television shockingly blacked out a broadcast.

In his first public appearance since invading Ukraine, Russian President Vladimir Putin praised his army for its “heroic” efforts. All plans will be implemented, Putin said in a speech in front of tens of thousands of cheering people at Moscow’s Luzhniki stadium on Friday. The performance caused a sensation, however, because the broadcast on state television was suddenly interrupted without giving any reason. Instead, they ran the recorded images.

Putin finished the speech at the stadium, but it was notoriously short. Kremlin spokesman Dmitry Peskov cited technical problems as the reason for the outage. There was a server failure. The reason for Putin’s appearance was the eighth anniversary of the annexation of the Crimean peninsula in the Black Sea on March 18, 2014.

Both Ukraine and Russia reported military successes on the 23rd day of the war. According to information from kyiv, the armed forces continue to occupy the most important areas. Troops responded to each attack by Russian units, President Volodymyr Zelenskyy said in a video message. Zelenskyi promised his compatriots: “You will be free.”

Several rockets hit the airport in the city of Lviv, in western Ukraine. Moscow confirmed an offensive at the airfield. Ukrainian fighter planes were stationed there. A workshop was also destroyed. Lviv (formerly Lemberg) is only 80 kilometers from the border with Poland, a member of NATO. According to Mayor Andrij Sadowij, around 200,000 war refugees live in the city and the surrounding region.

The Russian military reported that it had taken control of 90 percent of the Luhansk region in eastern Ukraine. The self-proclaimed Luhansk and Donetsk People’s Republics have been supported and equipped by Russia since 2014. According to British intelligence, Moscow is having trouble getting food and fuel for its troops because it has no control of the airspace.

Two days after the heavy shelling of a theater in the besieged Ukrainian port of Mariupol, according to Zelenskyy, hundreds of people are still buried under the rubble. It is said that about 1,000 people stayed there. On Thursday, 130 people were rescued alive from the building. Russia and Ukraine blame each other for the attack.

In a phone call with Foreign Minister Olaf Scholz (SPD), Putin accused the Ukrainian military of war crimes, according to the Kremlin. The shelling of residential areas in the cities of Donetsk and Makiivka resulted in numerous deaths. US President Joe Biden called Putin a “war criminal” this week. After the call, German deputy government spokeswoman Christiane Hoffmann reiterated: “The aim of the federal government is for the Russian leaders to change their behavior and end the war in Ukraine immediately, end their aggression immediately and then look for a negotiated solution”.

Putin also spoke with his French counterpart, Emmanuel Macron. According to the Kremlin, Putin assured that the Russian armed forces were doing everything possible “to save the lives of civilians.” Ukraine also accuses Moscow of targeting civilian infrastructure. According to the Elysee Palace, Macron addressed the situation in Ukraine, which was deteriorating with continued attacks on civilians and non-compliance with human rights.

China’s head of state and party leader Xi Jinping offered Biden in a nearly two-hour phone call to work together for world peace. “The crisis in Ukraine is something we don’t want to see,” Xi said, according to a report by state broadcaster CCTV. As permanent members of the UN Security Council, both states must “make efforts for peace and tranquility in the world.” The US government had previously warned China that it would provide military equipment to Russia in the war against Ukraine.

The US government wants to “effectively shut down” dozens of Russian aircraft with new sanctions to be applied around the world. The 99 affected machines include about a fifth of all aircraft operated by Russia’s state-owned airline Aeroflot, as well as several cargo planes and a private jet belonging to oligarch Roman Abramovich.

According to the UN refugee agency, 3.3 million people have fled to safety since the Russian invasion began on February 24. According to the federal government, around 200,000 war refugees arrived in Germany. The actual number is likely to be even higher. Only refugees encountered by the federal police, for example at the Austrian-Bavarian border, at train stations or on trains, are recorded.

The United Nations High Commissioner for Human Rights has documented the deaths of 816 civilians since the February 24 invasion. The High Commissioner only reports death and injury figures that he has independently verified; the actual number is likely to be significantly higher.

In the context of the Russian war of aggression, the semaphore coalition of the SPD, the Greens and the FDP is working on a new security concept for Germany. Foreign Minister Annalena Baerbock underlined Germany’s willingness to intensify its international commitment to peace and security.

The Russian state media RT cannot distribute the program at the moment.

After an urgent decision by the Berlin administrative court, the program of the Russian state media RT can no longer be distributed for the time being. The judges rejected an urgent request from RT DE Productions GmbH. The actual lawsuit has yet to be decided. German media regulators issued a broadcast ban in early February because the broadcast license was missing. Britain also banned RT from broadcasting its show.

Meanwhile, the Federal Minister of Economy, Robert Habeck (Greens), visits the Gulf Emirates to find new gas suppliers for Europe. This should also reduce Germany’s dependence on Russian gas. Habecke told ARD: “Our main goal is to build LNG terminals in Germany.” He was “in a good mood because the sum of the talks we are having (Norway, US, Canada, Qatar) will mean that we will also get new, meaning more liquid gas for Europe and also for Germany.”