Incidence in Lower Saxony is increasing 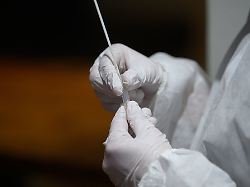 Hannover/Bremen (dpa/lni) – The number of corona infections in Lower Saxony increased again on Tuesday. According to the Robert Koch Institute (RKI), the seven-day incidence was 1811.2. This is the number of people per 100,000 inhabitants who have contracted the coronavirus in the last seven days. On Monday the value was 1677.6.

The value of hospitalization stagnated at 15.5. This value indicates how many people per 100,000 inhabitants with Covid-19 have been admitted to hospitals in the last seven days. The occupancy rate of intensive care beds with Covid patients fell to 6.7 percent (Monday: 7.1 percent). There were 27,132 new confirmed infections. Another 28 people infected with Corona died, the total number in Lower Saxony increased to 7826 deaths.

The highest seven-day incidence in Lower Saxony was recorded in the county of Bentheim with 2,638.3 on Tuesday, followed by the district of Gifhorn with 2,472.5 and the city of Emden with 2,468.2. Vechta district had the lowest incidence with a value of 341.7.

According to the RKI, the seven-day incidence in Bremen fell to 1,348.3 on Tuesday. On Monday the value was 1412.8. A total of 1,402 new corona cases were recorded and there was one other death.