In El Clásico, will Real Madrid touch their record against Barcelona? 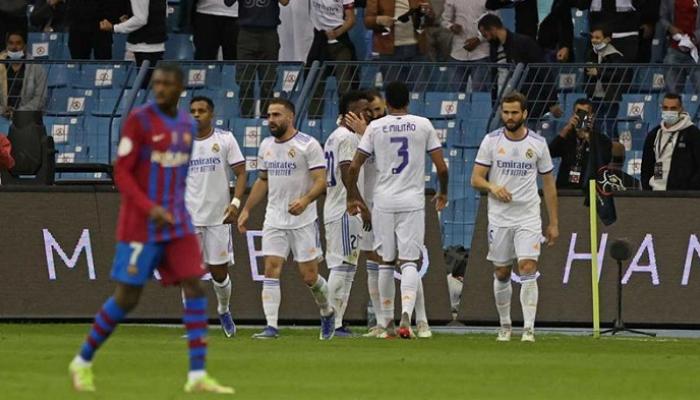 The countdown has begun for the long-awaited El Clásico match between rivals Real Madrid and Barcelona, ​​which will take place on Sunday night in matchday 29 of the Spanish League.

Both teams go into the match in high spirits, with Real Madrid on the Spanish league throne 10 points behind their closest supporters, in addition to their success in reaching the Champions League quarter-finals at the expense of Paris Saint -Germain.

For its part, the Catalan team managed to break through in the senior team by reaching 51 points in third place in the League, in addition to continuing in the European League by reaching the quarterfinals last week.

At the same time, Real Madrid received a serious blow before the Classic by confirming the loss of French striker Karim Benzema in the match, according to Italian coach Carlo Ancelotti.

The veteran manager had decided on the 34-year-old’s replacement but refused to reveal his intentions a day before the match.

Real Madrid aspires to continue to consolidate its control in the El Clasico matches in the last two years, as it managed to win the last 5 games it faced Barcelona since March 2020.

And if Real Madrid manage to beat Barça in the next game for the sixth time in a row, they will achieve the second best consecutive series of victories in the history of El Clásico.

Real Madrid itself holds the record for the best consecutive winning streak in the Clásico, which it achieved between April 22, 1962 and February 28, 1965, with 7 consecutive games.

Real Madrid will once again surpass Barcelona’s best winning streak, when they won 5 consecutive games between December 13, 2008 and November 29, 2010.

Barcelona will thus drop to third place on the list of the best consecutive victories in the history of the Clásico, leaving the two best numbers to their traditional rivals.