IMG is a business partner of the Arabian Gulf Cup 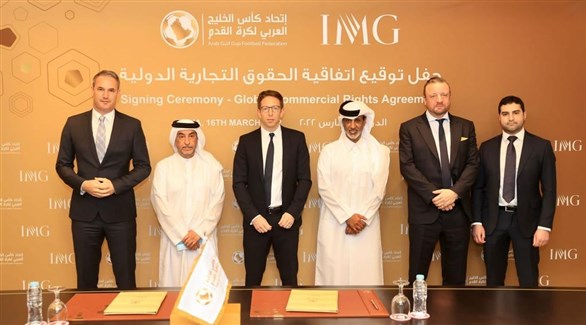 The Arab Football Federation of the Gulf Cup has announced a long-term business partnership with IMG for the next six editions of the Gulf Cup, which will take place from 2023 to 2031.

This came during a press conference held today, Wednesday, in the Qatari capital, Doha, and the Gulf Federation stated: “IMG will work to strengthen its presence in the region, and all its services, including copyrights, will be used. marketing media and all areas of commercial sponsorship and hospitality sales for the union, and the company will work to ensure the highest standards of production coverage for the eight-team tournament, which takes place every two years, the company it will also market media rights across all platforms, including tournament rights sponsorship sales.”

Arab Gulf Cup Football Federation President Sheikh Hamad bin Khalifa bin Ahmed Al Thani said at the press conference: “In the federation, we appreciate this partnership with IMG, and we hope that it will play an effective and significant role. in marketing and disseminating tournaments with high standards and raising the value of the tournament, especially that The Gulf Championship is receiving great attention and following in the region and the region”.

Al-Thani added: “This association will enhance the Arab Gulf Cup and its development, especially as it attracts football lovers because it represents the peculiarity of the people of the Persian Gulf, and will advance the tournament as it will participate in the qualitative change. that all Al-Ittihad competitions will witness in the future”.

Adam Kelly, CEO of IMG, said: “This is a very important partnership for our company and we look forward to working together with Al-Ittihad to maximize the commercial potential of the Arabian Gulf Cup, and we believe our investment in the tournament will transform this prestigious event. ”.

“We will bring a dedicated team of experienced executives to the region and plan to significantly expand our presence on the ground, along with our existing relationships with our long-term broadcast partners in the region and IMG Network’s international experience, will grow even further. and improve this competition,” Kelly said.

The tournament consists of two groups of four teams each, with the leader and runner-up of each group qualifying for the semi-finals, and then the two winning teams will meet in the final.

It is noteworthy that the Bahrain national team won the title of the 24th edition of the Arabian Gulf Cup, which was hosted by the Qatari capital Doha in 2019.