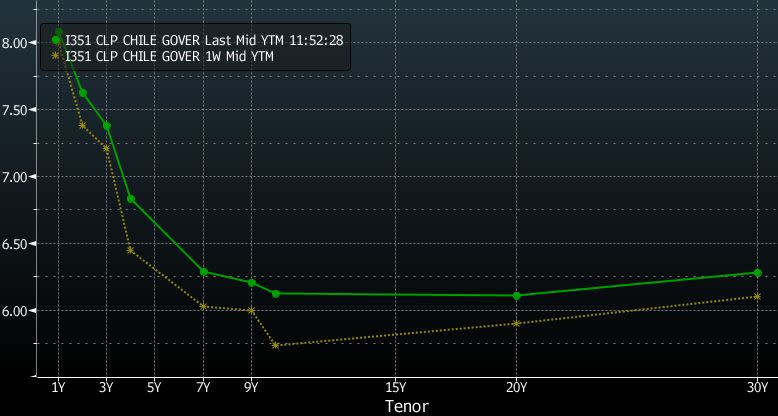 (Bloomberg) — Chilean bonds are on the defensive again after a lawmaker once again raises the specter of a new withdrawal from private pension funds.

Last week, deputy René Alinco presented a bill to approve another round of pension withdrawals, even as the new government of Gabriel Boric has indicated that it will not support the idea.

Since 2020, Chileans have withdrawn more than $50 billion from their pension savings accounts in three rounds. While that boosted spending and growth, it also helped fuel inflation and bond market outflows. A fourth retirement bill failed to pass Congress.

“Just when market liquidity was beginning to recover, the news broke again,” said Felipe Alarcón, chief economist at EuroAmerica. “Everyone believes that a new pension withdrawal would be fatal.”

Local government bond yields rose last week, with the 10-year peso bond rising 29 basis points to 6.13% and its UF counterpart advancing 18 basis points. The risk of further withdrawals from pension funds is one reason. Another is the continuing uncertainty surrounding the Constitutional Convention process.

However, Alinco said he would be open to abandoning the fifth retirement initiative if the government immediately raises the minimum wage to 500,000 pesos (US$624) or the minimum pension to 250,000 pesos.

Last week, Boric and his cabinet repeated the mantra that another withdrawal is not part of their program, though they stopped short of saying outright that they would ask their allies in Congress to vote against it. The new administration wants to raise the minimum wage to that level, but gradually.

The local market took in stride the Federal Reserve’s announcement that it expects to raise interest rates six times this year and a total of 10 times through 2023.

“Although the Fed statement is more ‘hawkish’ than what it had previously communicated, it is very close to what the market had priced in and the reduction in uncertainty is even more relevant,” said Klaus Kaempfe, director of solutions at Credicorp Capital portfolio in Santiago.

“It is natural that without the boost of liquidity the economy will lose traction,” Alarcón said. “The curve is showing that we may have two or three strong interest rate hikes ahead of us, followed by aggressive rate cuts after that.”

The local market also saw a runaway return of corporate bond activity. The retail company SMU sold 1 million UF in five-year bonds. It is the beginning of good corporate accounts in 2022.