“I Had No Childhood”: Catalina’s Escape from All the Violence of Her Life 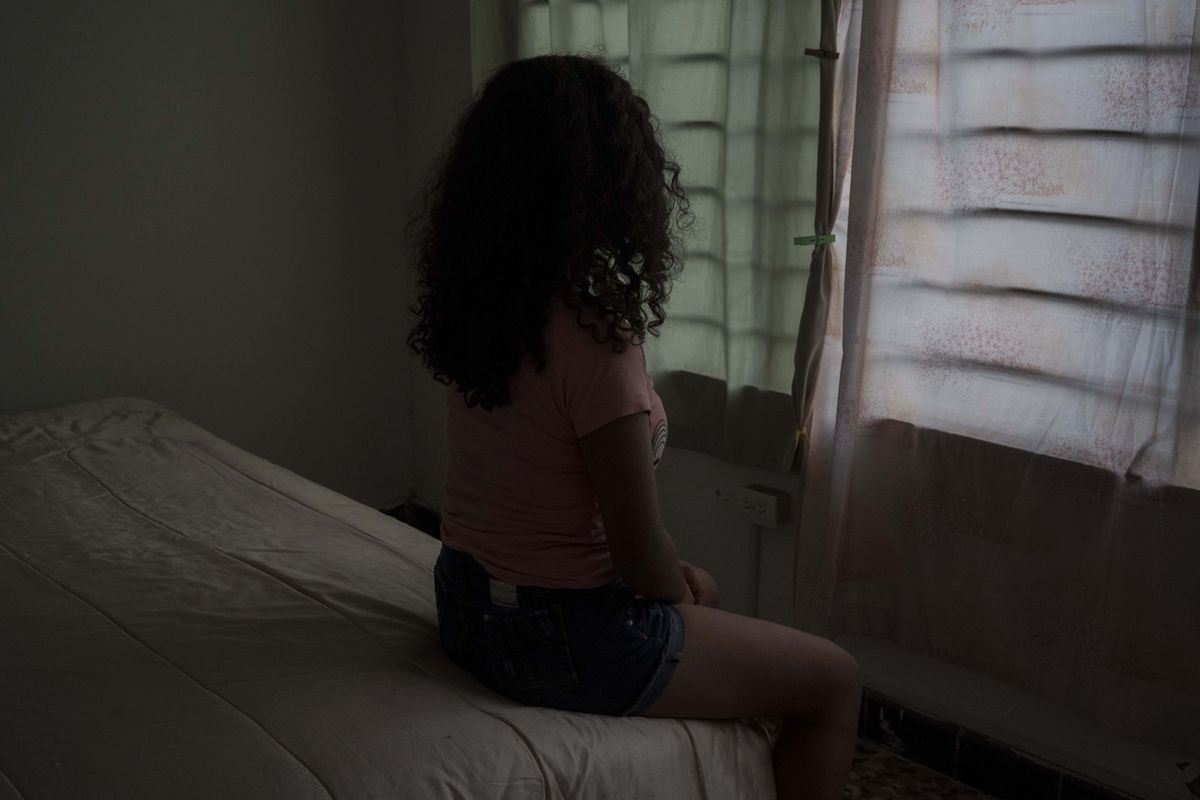 If you’re wrung out until you’re out of childhood happiness, you’re broken, but you’ve got some things straight. She knows exactly what she needs: “Love, that’s what I long for: love. In all sorts of ways.”

She is a teenager who was born 16 years ago in the oldest city in Colombia. On the shores of the Caribbean Sea: in Santa Marta. From there, over time, he moved to another of the oldest cities, this time at an altitude of over 1,200 meters. To Ibagué, in the Central Cordillera of the Andes. At that time, her mother separated from her father because he abused her. From then on, Catalina – who doesn’t have that name but is called that to protect her anonymity – one of her sisters and her mother switched houses again. In total, Catalina has four siblings, three boys and one girl. And a stepsister. But most of them he hasn’t seen in eight years. The eldest was born when his mother was 12 and says he had her “somewhere around 15”.

After these moves, even harder times would come. Although Catalina was already used to pain, a life riddled with all sorts of abuse has made it almost constant. Especially from your own family members. “We realize that most aggressors are connected to the girl or young person in one way or another,” says Maira Daza, drawing on her experience as a psychologist in the Born Again Foundation, which has been fighting violence and sexual exploitation in Colombia for more than 30 years. Adds Daza, “During childhood and adolescence, it’s extremely important to have that emotional support because that’s where we shape our personalities with myriad traits that allow us to establish ourselves and to know who we are.” Catalina had never that support.

Now when she plays with the boys and girls in her makeshift neighborhood, she asks them to pinch them to show them she doesn’t feel anything anymore. And he remains uninvolved. They probably hurt him, but his flooded memory of bad experiences has made him assimilate it as something tolerable. Just as she has assimilated as something perhaps unbearable but at least forgivable that her mother abandoned her at the age of 12 and handed her over to the Colombian social services when her partner let her choose between him – the stepfather – and his daughter, Kathrin. And he chose it. Also that her mother, when she was brought back to her at the age of 14, forced her to sell her body and use substances; that her grandfather tried to abuse her when she came to him without knowing who else to turn to; and that when she was a child, her father would beat her on the head with leather belts, cables, or pieces of wood until it bled.

All of this shaped the geography and climate of this young woman’s 16 years of life: a desert of affection lashed by storms of physical and psychological violence. But in the face of all these “very mean” things, as she puts it, she shows no grudges. He says he will be like the protagonist of rock doga film Great he’s seen at the movies the only time he’s been in one. The protagonist, the dog, dreamed of becoming a singer “and since he had hope and faith, it came true and he became very famous. I know my life will change like that too.”

In order to achieve that, she wants to study, even though she’s already in it these unicef ​​statistics showing that in 2018 only 46% of students who started school in Colombia finished it. Catalina barely went to school but would like: “I really want to study because when I’m 18 I want to see myself at a university, finish my studies, look for my apartment, a job…”. And when he has all that, his main plan is to find his family and sew up all the broken pieces: “I’ll put it back together. I will take my mother to a psychiatric ward so they can help her. For my stepfather, if he is still with my mother, I will take him to a psychologist. To my father, well, I’ll help him with some money so he can have a good stable house.”

Catalina’s story is also that of many other survivors of similar situations in Colombia. In 2020, the Attorney General of this country recorded more than 1,400 open court cases for offenses related to the commercial sexual exploitation of children and adolescents. Half of these are child pornography-related cases. A situation that arises in a more complex context, related to family and social imagination, in the words of Rocío Mojica, UNICEF Protection Officer: “If the child or young person is not conceived as equal, there is an idea that the adult can control both his will and his body”.

If the boy, girl or adolescent is not conceived as equal, the idea arises that the adult can control both his will and his body

These statistics from the Federal Prosecutor’s Office are usually only the tip of the iceberg. “We always have tremendous under-reporting,” says Arturo Herrera, communications coordinator for the Renacer Foundation. This happens because people are afraid to report them or because they don’t believe in the legal system: “Sometimes the law is enforced and sometimes it isn’t. That’s why there are few women who want to complain,” says Gladys Esther Montes, one of the leaders of the Nelson Mandela neighborhood who raised those displaced by the violence of the armed conflict in Cartagena de Indias in the early 1990s. There, Montes says, “the girls go out to sell their bodies, because what other opportunity do they have? A home where this mother did not have this opportunity …”. Mojica puts this into perspective: “The families themselves believe that using the girl’s body is a means of dealing with severe poverty situations with complex conditions.” Not only so that she can get ahead, but so that the whole family can do it.

And that leads to the third option that motivates this underreporting in statistics on child sexual exploitation: that these situations are not even considered crimes. “There was an additional challenge in the city of Cartagena, and that is that the people of that city, although they saw the crime, although they saw the behavior, normalized the situation. It is a task to deconstruct these imaginations,” says Renacer’s communications coordinator. In Cartagena, one of the tourist hubs on Colombia’s Caribbean coast, this problem is compounded by sexual exploitation linked to travel and tourism. Mainly because of racism and discrimination. In this sense, the Colombian Institute for Family Welfare (ICBF) points out: “Some perpetrators choose boys or girls from another ethnic group because they consider them inferior and believe that the local culture condones sexual exploitation.”

“My grandmother did the same thing my mother did to me. And it also led her to drugs.” When Catalina’s mother first turned her into social services, she was a drug user and sex worker. This 16-year-old girl tells it, sitting on one of the two chairs that were brought outside, into the courtyard with white walls, broken parts of a large house, with a security gate on the front door, with a dog that walks from time to time was barked to time, with a large living room and open kitchen in the back, and a high cement table in front of a door that leads onto this terrace and this chair where Catalina is speaking.

But this is not your house. This isn’t even the neighborhood she’s temporarily living in in Cartagena since she fled the last foundation that housed her a few weeks ago. This is not her room and, for what she says, the opposite of the rooms that have been her life: “As a child, sweeping, washing the record, mopping, all that. Locking up and then following my father’s discussions with my mother. “

Atrocities have shaped the life of this teenager, who now wants to make amends:

— I want to enjoy my life with games because I didn’t have a childhood. Play catch, hide and seek. I even play kitchen. And we plan to play American hide-and-seek.

-And how is that?

— It’s about you hiding with your partner and then they start kissing and that’s it. Until they realize they’re doing something else… And when he says it to Catalina, a half-childish smile appears that quickly turns into a more serious gesture. “But I don’t do that anymore.” I kiss and nothing else. It is better to avoid than to regret.

Daza, the psychologist at Renacer, says that in her experience, minors aged seven and older are the most common impacts of sexual exploitation they express themselves in the form of low self-esteem, anxiety, depression or the use of psychoactive substances: “It is a complex process. The girl needs to start channeling and expressing all these situations that she has experienced. Not just of abuse, but of abandoning the flaws it certainly has. With therapeutic intervention, they can overcome these situations.”

Catalina has seen psychologists and psychiatrists on several occasions and occasionally, but has not followed or continues to follow any ongoing therapy. “I can’t get angry because my body starts to hurt, it gives me a very bad pain in my heart and I get angry and I don’t think.” And her face and body are sad as she explains.

Catalina has dark curls now, a hand nervously touching her leg, a finger touching her eyelash wiping away a tear, trying not to cry, a few shortsan innocent conversation, dark eyes, an occasional distant gaze, unsure, trainers, a permanent escape.

She escaped from one of the reception centers to her grandfather’s house, who didn’t want to keep her. She ran away from one of the centers to go back to her grandfather’s house and ask him why he didn’t visit her for her 16th birthday. And he fled before and after. He recently ran away to temporarily sleep on a sofa. And she fled in the past to the house of a former stepfather who had treated her well and who also took her well although he could not take her in:

“Well, he gave me everything.” Mechato, all that. Do you know what mecha is?

Right now his future is a sheer curtain and he still hasn’t quite figured out how to pull it back to let the light in. Despite this and despite his youth, he manages to put things in perspective. Or perhaps do what is necessary to move forward: “Everything in life has an end and a beginning. Even though they hurt me, I forgive them because they are my family.

- Advertisement -
Share
Facebook
Twitter
Pinterest
WhatsApp
Previous articleA Morning in the White Light: A Doctor’s Story After His First Euthanasia
Next articleJohnson assures that Russian troops could exhaust their resources “in the coming months”.