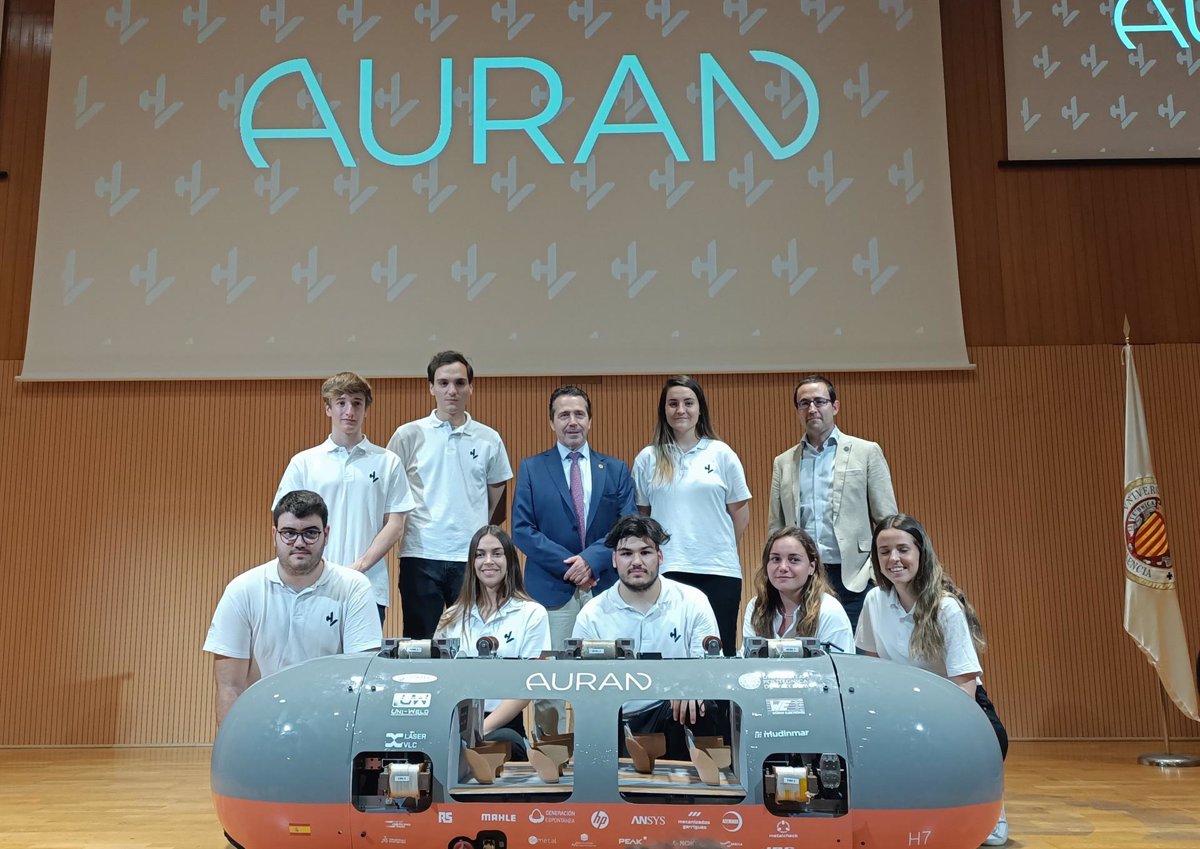 Hyperloop UPV, the student team from the Polytechnic University of Valencia (UPV) that has been working since 2016 to develop a functional Hyperloop prototype that aims to make the transport of the future a reality, will be at the European Hyperloop Week ( EHW ) in July this year with a new vehicle that can hover when moving.

It’s a prototype called Auran, which is lighter and faster than previous Hyperloop UPV projects by eliminating friction with the surface. This team has also developed an “innovative” interior design for its new proposal, which mimics a space with seats and allows possible passengers “with privacy and intimacy”.

Added to this is the creation of a “key” infrastructure for the development of this technology, a 20 meter long tube through which the vehicle will circulate in the EHW. This structure is extensible so that it can be used with new prototypes that the team will develop in the years to come.

The “safest” prototype in Hyperloop UPV history, Auran features a linear induction motor that allows the motor itself to accelerate and brake without having to touch the track. Likewise, and thanks to an “innovative” electrical system that eliminates it, it manages to work with just 50 volts, eliminating high power consumption, “one of the most common problems in this type of system”.

The team responsible for the prototype made the announcement this Tuesday during a ceremony at the Nexus Building on this campus, attended by the rector of the academic institution, José E. Capilla.

Hyperloop UPV is part of the Spontaneous Generation program of the Polytechnic University of Valencia. This working group consists of between 40 and 50 master’s students, doctoral students and postgraduates from various disciplines such as electronics, computer science, industry, marketing, business administration and management.

Auran is both the first vehicle in the history of this team to be “capable of hovering effectively”, as well as that of all vehicles participating in the European Hyperloop Week, which will take place from July 18th to 24th at the University of Delft takes place in the Netherlands. Hyperloop UPV will be one of the two Spanish teams taking part in this competition.

The technical director of the team, Javier Luján González, has pointed out that Auran’s levitation “was achieved with a highly efficient technology that allows it to be pulled towards the ceiling and walls in a controlled way, thanks to magnets, instead of being repelled from the.” Floor”.

Daniel González, representative of the software part of the team, explained that the prototype presented was a “much more complicated” model than previous ones in terms of communication and code. “Last year we had an engine and we had to control that engine. This year we have many boards, they need to communicate with each other, read ten distance sensors and calculate turns. It’s more complicated,” he explained.

For his part, González has spoken of the “many hours” of work that this proposal entails and thanked the “challenge” that it is said to be overcoming on its own. “None of the other teams have ten hover units that are all connected and synced together,” he added.

“We don’t like to be satisfied. Every year we dare something different. This year we have not only stayed with the vehicle concept, but also with the infrastructure that allows Auran to move in a tube. The way of levitation is revolutionary. We do it.” You have to get close to the top of the roof and for that you have to have infrastructure. It’s a very big leap,” added Hyperloop UPV team captain María Cuesta, who viewed her group as the “leading” group.

The Rector of the UPV has highlighted that Hyperloop “already has a solid tradition that continues to grow” and that it is “one of the groups that shines the most” and has “reached many successes”. José E. Capilla has appreciated the “very important news” that the team is arriving with this year.

“EVERY YEAR INVENTS SOMETHING NEW”

“Every year this group reinvents something and makes some innovative proposal” that “was the internal vehicle this year, with this concept that they proposed and designed: Auran,” he explained. The rector also highlighted the proposal to “move the vehicle in the tube with maglev without touching the walls and moving along rails”.

Chapel has assured that “all rehearsals are working” and is confident that “everything will go very well” at the competition and “success” will come. “The two innovations are very promising,” he said, while appreciating Hyperloop’s contributions beyond the classroom.

“This program contributes many things. Its purpose is to improve the education of our students who participate and acquire a range of transversal skills that cannot be obtained with other types of activities,” added the head of the UPV. Likewise, he has estimated that students “enjoy” these experiences and that they take on “challenges” that require them to “work hard.”

José E. Capilla has also emphasized that Hyperloop makes it possible to contribute “conceptual and technical innovations” that can become “prototypes that reach the industry” and become “reality”. Similarly, he appreciated the projection that initiatives like this give to the UPV outside of its usual activities.

“This is a unique program in the Spanish higher education ecosystem. There is nothing like it, there is nothing like it. We have already involved more than 2,000 students. This gives tremendous value to the education of students, which later allows them to enter the company almost directly,” said the rector, who also highlighted the involvement of various companies in this initiative.

“This program is possible thanks to the companies that contribute with their donations or by paying for certain types of components,” since “it’s very expensive,” he said. He also assured that with the development of these projects, the students “learn to organize and systematize the work themselves” and spoke of the “almost immediate opportunities” that open up for them in the industry.

“Starting a path together”: former priest and former nun left their habits to start a love story

The PP censors the attempt to silence Mari Mar Blanco in the tribute to her brother: the PSOE “disrupts” the victims