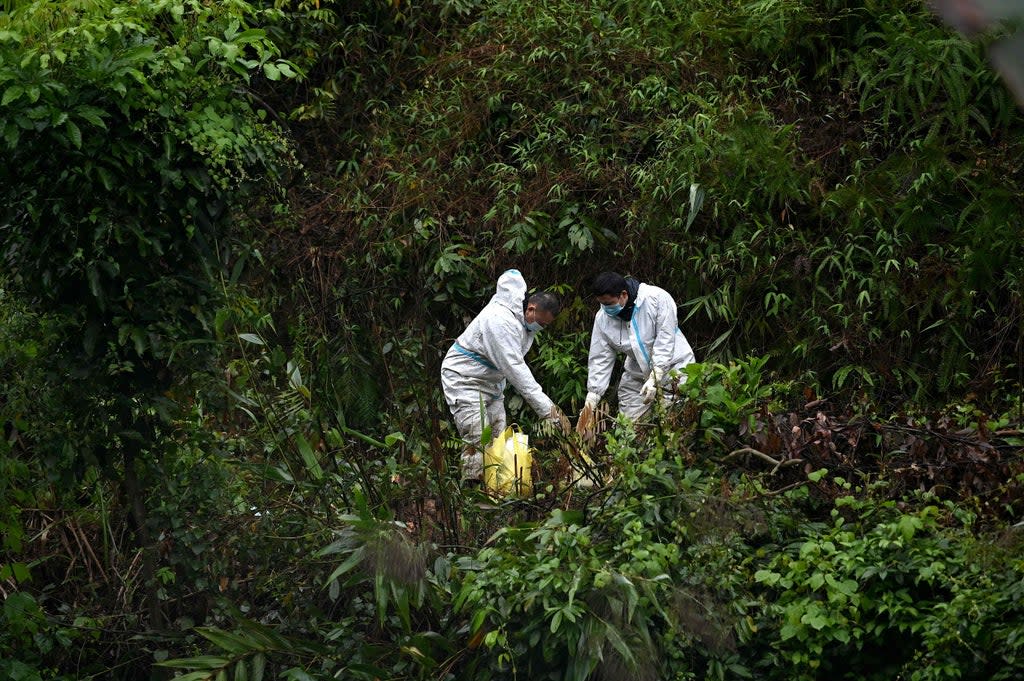 Human remains have been discovered at the plane crash site in China, state media said.

No survivors have been found after the China Eastern plane carrying 132 people plunged almost vertically, crashed and started a fire on a mountainside on Monday.

Grieving relatives have now visited the site as emergency recovery workers continue to search the area among the wreckage of the plane.

Occasionally rain has impeded the search for the crash site.

Hand tools, metal detectors, drones and sniffer dogs have been used in the search of the wooded area.

Wallets, identity and bank cards have been discovered.

The search continues to find the plane’s second black box after the first one believed to be the cockpit voice recorder was found earlier in the week.

Black boxes are key to establishing the final moments before a plane crashes.

“An initial inspection showed that the exterior of the recorder has been severely damaged, but the storage units, although also damaged to some extent, are relatively complete,” said Zhu Tao, an official with the CAAC.

Cockpit voice recorders can capture voices, audio alerts, and background sounds from the engine or even switches being flipped.

The flight data recorder stores information about the aircraft’s airspeed, altitude, and heading up or down, as well as pilot actions and the performance of important systems.

An air traffic controller tried to contact the pilots multiple times after seeing the plane’s altitude drop sharply, but there was no response, authorities said.

The weather along the flight path did not pose any danger to the aircraft on Monday, said the head of aircraft research at CAAC, Mao Yanfeng.

Investigators said it is too early to speculate on the cause of the crash.

One of China’s major airlines, the plane was traveling from Kunming to Guangzhou.