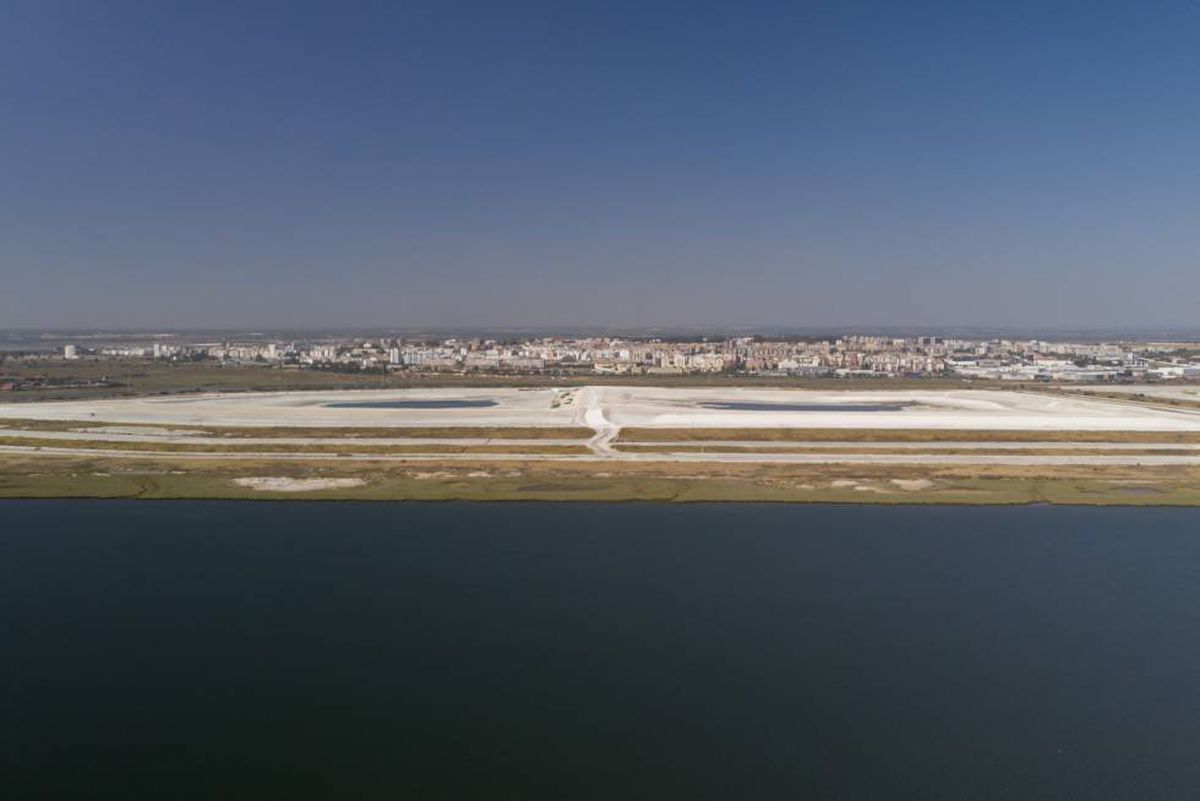 Scientists have been studying the phosphogypsum basins of Huelva since 1998 – with 120 million tons of toxic waste next to the city – and their conclusions are unequivocal: the plan proposed by the Fertiberia company to bury them under a meter of earth and clay poses a serious risk of collapse Accident with catastrophic consequences for the Andalusian city of 150,000 inhabitants located just 500 meters from this industrial waste. However, the unanimous opinion of science did not please the city council (PSOE), which commissioned its analyzes from experts in 2015 and hid them in a drawer for a year and a half.

“Let’s bury the science because we don’t like what it says and forget about phosphogypsum despite the proven structural stability problem. Even if? We don’t know when the perfect storm will come, but we are in a unique place in the world because there are no heaps of phosphogypsum in a swamp,” criticizes one of the researchers from the University of Huelva. The scientist demands anonymity because he was forced to sign a confidentiality clause that forbids him from disseminating information without permission from the consistory.

The conclusions, which contradict the Fertiberia plan, have not been communicated to the Ministry of Ecological Transition, which approved the restoration project in 2020, nor to the Andalusian Government, which will finalize its environmental permit before the end of the year so work can begin. In this way, the administrations plan to approve a plan worth 66 million that will last a decade, given the scientific research carried out between 2015 and 2020.

The City Council, which issued an urban compatibility study for the project, refuses to explain why it avoided heeding the warnings of the 20 scientists from the Universities of Huelva and Granada, the Higher Center for Scientific Research (CSIC), geology and mining to disclose Institute (IGME) and ISGlobal. Socialist mayor Gabriel Cruz commissioned the studies in 2015, but after the ministry’s declaration of positive impact in September 2020, he convened the last meeting of the participation committee, to which the scientists report, on December 29 of this year. That day, two scientists warned political parties, unions, neighborhood and environmental groups about the danger of collapse and contamination that Fertiberia’s plan entails. Since then quiet.

“I feel neglected by the city council, I thought science would influence the restoration and I don’t know what role we played. We were founded for political reasons, but the decision had already been made,” laments another university researcher, who has also claimed anonymity to avoid a possible legal dispute. The Vice Rector for Research and Transfer of the University of Huelva and President of the Expert Group, José Rodríguez, assures that the Consistory – which has not fulfilled its public obligation to inform the public every six months – plans to convene the scientists before the end of the summer: “We’re going to write a report and from there the tricky question is to what extent do we make it public because of the confidentiality obligation.”

Following the ministry’s positive environmental impact statement, the Council for Nuclear Safety (CSN) approved the laying of phosphogypsum a month ago because it provides radiological safety, and now the ball is in the hands of the board. Its integrated environmental certification checks for emissions of pollutants into the atmosphere, discharge of water and possible impact on human health. “We have already had the dish served up by the Ministry and we cannot dispute it,” comment sources from the Ministry of Sustainable Development, whose delegation in Huelva, without experts in geotechnics, geodynamics and hydrology, is expected to approve the remediation plan in the summer.

After five decades of accumulation of fertilizer manufacturing waste ending in 2010, scientists have studied the structural stability of the rafts, their progressive sinking due to the piling pyramids of up to 25 meters, tidal pollution in the Rio Tinto estuary and how the stack would react to a possible earthquake or tsunami. The conclusions about the proposed restoration plan are worrying.

“The deformation of the supporting substrate is continuous over time, as is the subsidence of the front zone of the chimney in Zone 2. This clearly confirms the serious risk of chimney collapse,” warns the latest study by the University’s Subsurface Geology and Geotechnics Group Huelva.

The main threat comes from the stability of the ponds, which are sinking at high speed because they are heterogeneously settled under mud, with up to 25 meters of mud in certain areas and only five in others. The collapse of the heap is “staggering”, in the words of a third researcher, who also signed the confidentiality clause, from the Institute of Geodynamics at the University of Granada, who has verified how the rafts are being pushed in at the same time as the bottom of the canal is rising. “The vertical deformations reach 21.5 cm/year and accumulate movements of up to 80 centimeters in the monitored period,” reflects the study from this university. Copernicus, The earth observation program of the European Commission has been able to view this sinking online for several weeks.

“As it sinks, the structure will either move toward the channel or collapse [la desembocadura del Tinto], creating a displaced block that would act as a dam in the estuary. This would cause a shock wave and the Tinto’s water [de color cobrizo y con metales pesados de las minas] they spread to the right towards Huelva and to the left towards Palos and Moguer”, adds the first of the mentioned experts from the University of Huelva.

Scientists have confirmed, thanks to high-resolution seismics, that liquids are migrating from the base of the chimney to the lower-pressure area, the estuary channel. “The basis of the project [de Fertiberia] is that there is no migration of liquids. Encapsulated sample tensile tests were swallowed by Miteco [Ministerio para la Transición Ecológica] because the engineer understood that in impermeable materials such as mud, lateral fluids do not migrate. The problem is that here the substrate is tilted, there is a tilt,” warns this last scientist. The best example of the instability that the swamp brings is the old bullring near the rafts, which was declared a ruin in the 80s and collapsed.

The swamp’s low-to-medium-magnitude seismic activity includes active faults nearby: “High-magnitude earthquakes should not be ruled out, even if they have not yet been registered,” warns a study using data on the area’s seismic activity between 1900 and 2019 , including a 4.2 magnitude earthquake just 11 miles from the rafts that occurred in 1956. Regarding the risk of tsunamis, the Department of Geosciences of the University of Huelva has identified 14 seaquakes in the last 9,000 years in the Gulf of Cadiz thanks to drilling and analysis of marine deposits. The last catastrophe was that of Lisbon in 1755, but documentary collections also support those of 1531, 1013 and 881. “Between 400 and 500 years a tsunami comes, the problem is that there is no precise and enduring periodicity. When it reaches the coast, the large volume of water behaves like a tide with a current of up to five meters per second, dispersing the elements,” explains Juan Antonio Morales, an expert in this department.

In parallel, scientists have studied the pollution of the estuary and have confirmed that it is generated by the water entering through the estuary and returning through the tidal channels, much more acidic and laden with metals. Only 9% of the seepage water comes from the infiltration of the upper reservoir. “The contribution of arsenic or cadmium is quite significant,” summarizes a fourth expert from the Institute of Mineralogy and Geochemistry at the University of Huelva, who has studied the environmental geochemistry of the ponds. “Covering the surface of the pond with natural soil does not guarantee the cessation of the riparian runoff that reaches the estuary,” warns the report of this department, which recommends monitoring, collecting and sending all water to a passive treatment system before its discharge into the Huelva estuary -Mouth. In addition, the researchers propose building a deep barrier that prevents tidal water access to the interior of the basin to avoid the creation of rim vents.

Experts met with Fertiberia in 2020 to examine the hydrogeological model using data collected over the past few decades, but two years later the company still hasn’t made it available. When asked about this, the company refused to explain its refusal to work with the experts. “It is very clear that everything has changed for the city council after Miteco spoke out,” said Francisco García, spokesman for Ecologists in Action.

The paradox of the scientific reports is that they are thanks to the Andalusian Board of Directors, which transferred funds of 200,000 euros in “two special actions” received from the University of Huelva. In other words, the regional government subsidized knowledge that ultimately, due to the Huelva City Council, will not affect the decision of its own Ministry of Sustainable Development. Despite its original pledge to donate 100,000 euros annually to scientists, the city council never transferred this money to this institution.