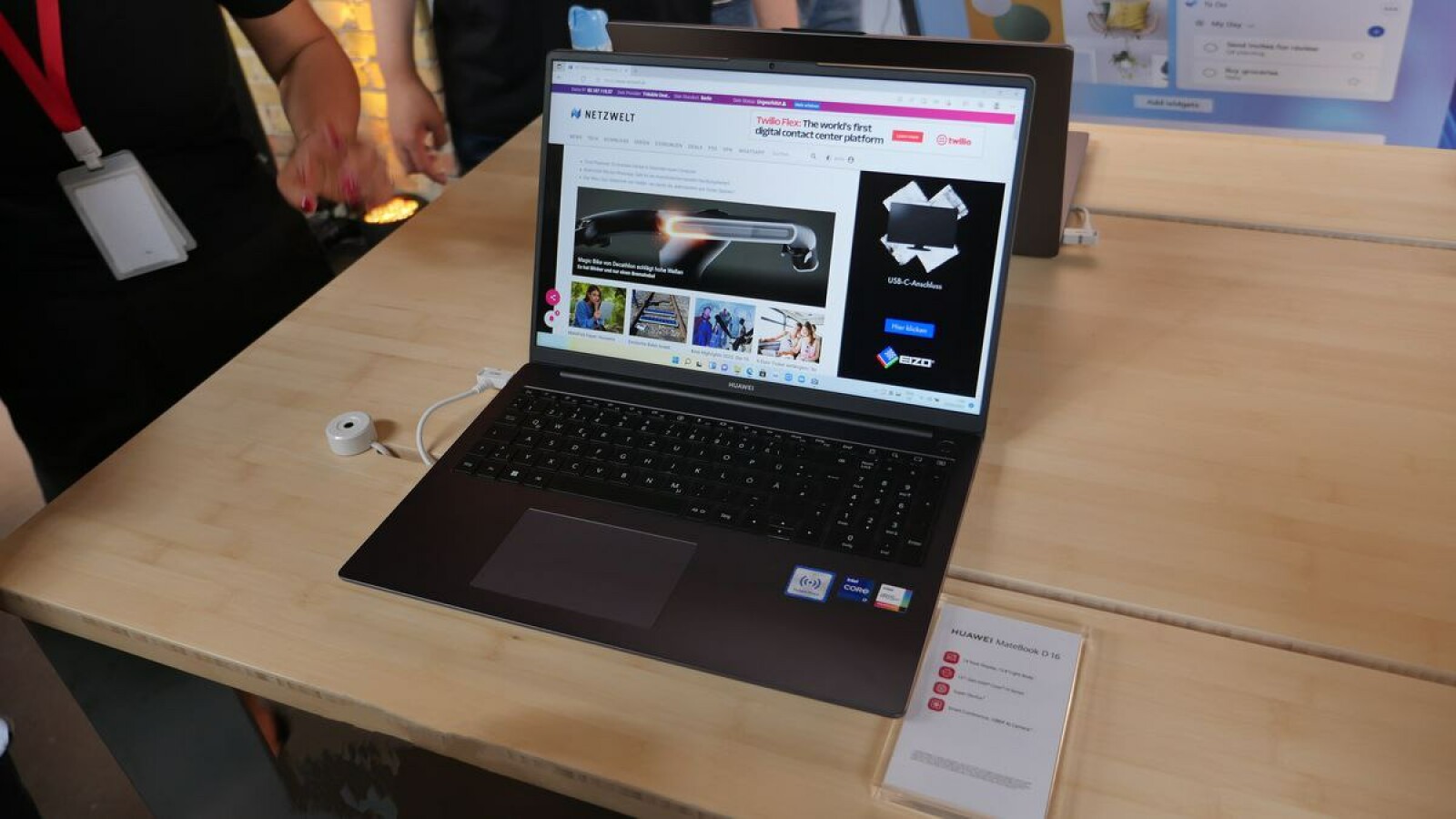 Huawei showcased a number of new products at the Smart Office event in Berlin. Including a new edition of its MateBook D16 laptop. With an Intel Core processor, larger display format, and AI support, it should make day-to-day hybrid work easier. In this short test we will tell you if there is potential for it.

Huawei focuses on the essentials. The new edition of the MateBook D16 comes in a no-frills aluminum metal case. It appears in only one color version, which is called “Space Grey”. Apart from the large manufacturer name on the back, it hardly stands out from the crowd of gray laptops.

With dimensions of 369 x 234 x 18.4 mm and a weight of just 1.7 kg, it is pleasantly light to hold. If you need to quickly move to the office conference room, you can easily carry the MateBook to the next room with just one hand.

The notebook has a wide grille on the underside for waste heat, which is carried outwards by two fans. This doesn’t bode well for users who like to have the device on their lap while on the go.

On site, the devices remained pleasantly cool. The noise development was also barely noticeable. This is mainly due to the fact that the devices did not have anything difficult to do and no complex applications were pre-installed. In a thorough product test, we will therefore have to devote ourselves to these topics again.

With the new edition of the D16, Huawei relies on Intel instead of AMD. You have the choice between Intel Core i5 12450H or the i7 12700H. This means that the 12th generation of Intel Core processors has also arrived at Huawei.

In a direct benchmark comparison, these Alder Lake cores often perform 20-40% better than previously used AMD Ryzen 5 processors. Changing the processor manufacturer can therefore be considered an upgrade. During the event, image changes, program starts, and page calls were performed smoothly and without waiting.

However, we see no change in working memory. There will be only one version and it is equipped with 16 gigabytes of LPDDR4 memory. This size is sufficient for the vast majority of applications in work and leisure.

A 512 gigabyte NVMe SSD memory is used for documents, images and projects. Unfortunately, this cannot be extended and there is also no integrated card reader in the notebook.

The MateBook D16 uses an IPS display with a screen diagonal of 16 inches. Like its predecessor, it should shine with up to 300 nits of brightness. This corresponds to 300 times the brightness of a candle.

However, it’s not as bright as one would like and since the surface is reflective, these are not good conditions for working outdoors.

The screen of the MateBook D16 is longer than that of its predecessor. Huawei justified the change of format from 16:9 to 16:10 with the scope. The manufacturer sees it primarily in mobile work and less so in entertainment and gaming, where a larger format is prevalent.

The MateBook D16 has a slightly larger battery than its predecessor. Here, 60 instead of 56 watt hours are used. The older variant was able to deliver a good 11 hours of use on a single battery charge.

12th generation Intel Core processors are said to be more energy efficient than their AMD competitors. Depending on CPU efficiency in the new edition, you can get a bit more than the mentioned 11 hours.

Huawei has given the D16’s keyboard a bigger drop compared to its predecessor. However, it is still small at 1.5 millimeters instead of 1.2 millimeters.

However, fast typists need not worry about being tormented by ghostly double letters in the future – so-called ghosting. Our trained journalist fingers were very pleased with the reaction speed of the button tabs.

The keyboard keys are illuminated, but the brightness could be brighter. We really liked the touchpad. The Smooth Glass surface is pleasantly large and accepts input very accurately.

A fingerprint reader is integrated into the power button. The registered Huawei employee recognized the finger without hesitation.

The D16 was designed for the mobile working world. The laptop is equipped with a total of four microphones, two of which are located in the upper edge of the screen and two in the frame facing the user.

The new edition of the D16 no longer has a retractable webcam in the keyboard. Instead, it’s now back in the display edge of the screen. It’s a shame, because this feature was actually popular for privacy reasons. The new camera is now exposed and a view cover has not been integrated.

The retractable webcam was removed for a good reason, we were assured. Because this change is used for eye contact in video conferences. The visual impression is at eye level and avoids looking down into the camera.

The laptop is factory-equipped with Windows 11 in the home version. Based on this, Huawei has pre-installed some programs that should help you make better video calls.

Using artificial intelligence, AI Sound and AI Video tools should serve with facial recognition, voice focus and noise cancellation. In the exhibition situation on site, it also worked well and reliably. We will check in the detailed test report whether this also works on a crowded train.

The MateBook D16 is also equipped with the Super Device. This allows you to better synchronize your different Huawei products and work on multiple devices.

at Huawei Buy the MateBook D16*

Until July 31, you will also receive the Huawei MateView GT27 monitor worth 399 euros for free in the Huawei online store.

The MateBook D16 makes a promising impression with its high-quality finish and hardware improvements. Only the display quality leaves something to be desired. A little more brightness would have been welcome here. Overall, Huawei offers a good laptop at a fair price with this laptop.

You do not agree ? Are you looking for suitable alternatives? Below are the best Huawei MateBook D16 alternatives. You will find an even more comprehensive list in our notebook overview.

Here you will find the technical data of the Huawei MateBook D16. You can easily compare size, weight and other properties with other products.

- Advertisement -
Share
Facebook
Twitter
Pinterest
WhatsApp
Previous article“Bauer sucht Frau” stars Narumol + Josef: Rare picture! Her daughter Jorafina has become a real teenager
Next articleThese are the most expensive cities in the world to live in