High honor for the Biontech team 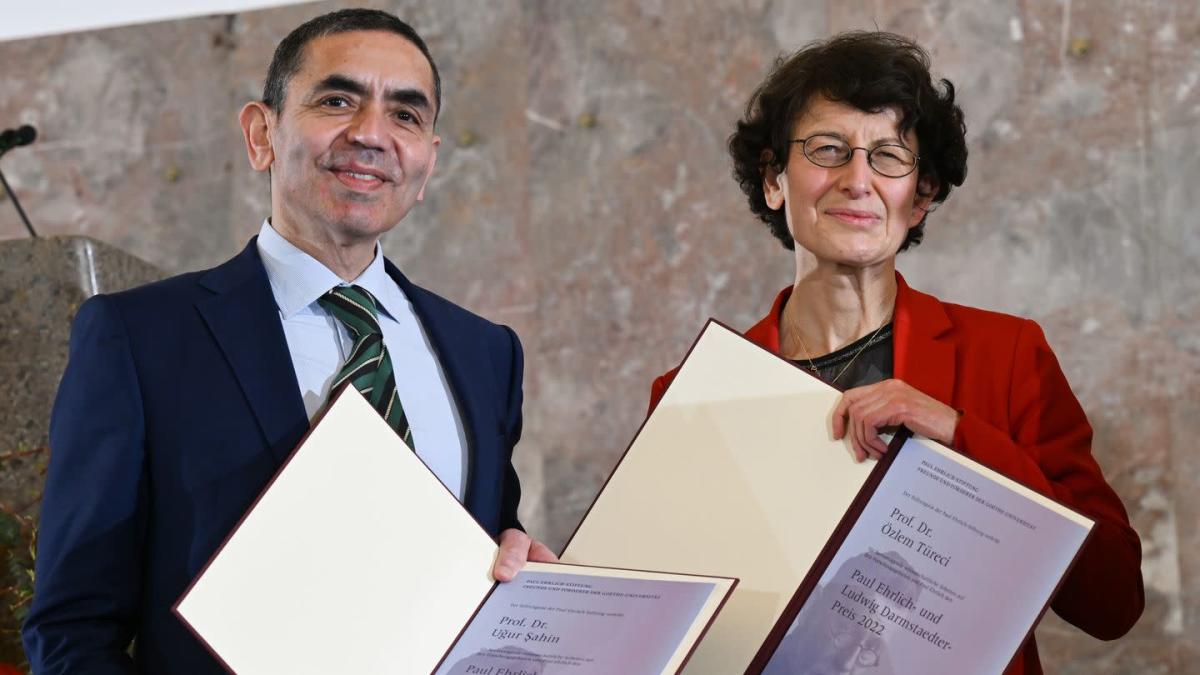 Frankfurt am Main (dpa) – The developers of the first German coronavirus vaccine have been awarded one of the country’s most important scientific prizes.

The founders and employees of the Mainz-based company Biontech, Ugur Sahin, Özlem Türeci and Katalin Karikó, received the Paul Ehrlich and Ludwig Darmstaedter Prize, endowed with 120,000 euros, on Monday at the Paulskirche in Frankfurt.

Not only was he honored for the “spectacularly rapid” development of the mRNA vaccine against Covid-19, from which, according to the laudatory Prof. John Walker (Cambridge), “countless millions of people around the world benefit”. They also established a technological platform “that should initiate a paradigm shift in medicine”: mRNA technology is ushering in “an exciting new era” in which vaccines could be used against infectious diseases and cancer.

“We think we will see a series of successes in the next five to 10 years,” Sahin told reporters a few hours before the award ceremony. The fact that it was possible to develop the coronavirus vaccine in just ten months has had a huge impact on medicine: “The success is the beginning of an era for mRNA therapeutics.” The goal is tailored vaccines against a single patient’s tumor, which could be developed in a few weeks. It is also conceivable that the mRNA could be used to treat heart muscle or autoimmune diseases.

For the first time in the award’s 70-year history, two-year winners will be honored — the ceremony was canceled last year due to the coronavirus pandemic. Subsequently, American microbiologist Bonnie Bassler received the 2021 award. Michael Silverman, who was honored with her, was unable to come to Frankfurt. According to the award jury, they discovered how bacteria communicate with each other and thus paved the way for a completely new type of antibiotic.

By understanding the “language” of bacteria, one could perhaps influence them: disrupt communication between undesirable bacteria or promote desirable variants. This also opens up new perspectives in the fight against antibiotic-resistant bacteria. The prizes for young researchers, endowed with 60,000 euros, are for the biologist Elvira Mass (Bonn) for 2021 and for Laura Hinze (Hannover) for 2022.