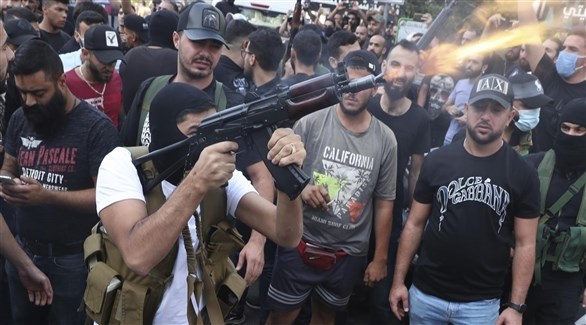 The Hezbollah militia continues to intervene on the Lebanese scene, in the judiciary, and in political, security and economic files, defending corrupt forces and threatening their opponents, as is the case with electoral candidates who oppose the militia. , or killing them, as happened more than a year ago with the opposition Luqman Salim, who was assassinated by members of the militia by firing squad in southern Lebanon.

Today, with the arrival of Iranian Foreign Minister Hussein Amir Abdollahian in Beirut from Damascus, a new lawsuit has been announced against the head of the Lebanese Forces Party, Samir Geagea, accused of committing criminal offences, specifically in the case of the Hezbollah attack to the Tayouneh-Ain al-Rummaneh, which confronted the Lebanese army, which caused the death of about seven militiamen.

The allegations of the judge affiliated with the Free Patriotic Movement, and its leader, Gebran Bassil, come after the militia and its allies prevented the investigating judge of the port explosion from summoning deputies and ministers, accused of overlooking the substance “ammonium nitrate” that Hezbollah imported to be used as fuel for the missiles it intends to manufacture.

The Lebanese Forces party responded to Geagea’s summons, considering that “these practices are a systematic destruction of the judiciary and justice in Lebanon, carried out by some judges in response to some political parties, especially Hezbollah and the Free Patriotic Movement. , to take revenge on his political adversaries”.

Sources in Beirut believe that the judicial authorities’ silence on the militia’s interventions comes after their security officer threatened to kill honest judges if they resist sabotaging the judicial institution.

Meanwhile, the judiciary refrained from investigating the murder of Luqman Salim after handing over the file to a judge loyal to Hezbollah, as he was permanently absent from this case.

UN sources fear the tension that the militias are trying to unleash in southern Lebanon on the border with Israel, where the United Nations special coordinator in Lebanon, Ioana Frontka, at the UN Security Council, warned about “the fragility of the relative calm between Lebanon and Israel”. .”

Hezbollah leader Hassan Nasrallah spoke some time ago about his militia’s ability to make drones and turn missiles into smart ones, despite the fact that its drones are imported via traders from Europe and China, and the sources note that the Nasrallah’s accusations are just “wishful thinking” after the destruction Israeli forces have stockpiled these planes in recent months in Lebanon and Syria.

UN forces in southern Lebanon warn of Hezbollah’s continued smuggling of drugs and firearms into Israel, as the Israeli military revealed the link between drug smuggling and arms smuggling, and thwarted attempts to smuggle dozens of guns and dozens of kilograms of drugs.