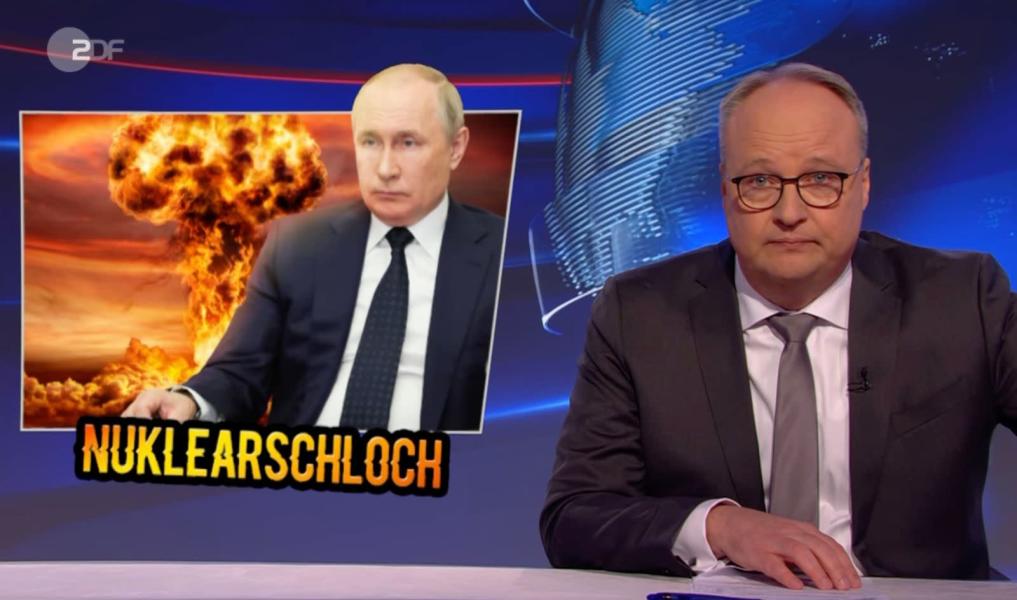 The game “Putin against the rest of the world” continues, behind Ukraine’s back, according to the “heute-show”, but he made it clear why the “young dictators” should not take the Russian despot as a model. Other focal points: why Merz trembles in March and how Lindner gets seasick.

Humor is when you laugh anyway. Even if the war has been going on for more than a month and, if necessary, with a symbolic knife between his teeth, he teaches cynically. Moderator Oliver Welke and the team of “heute-show” went back to the old bite according to the motto “eyes open and through”. It’s also true: war sucks, suffering is bitter, inaction even more bitter, but all this, including the latent fear that there could be more, cannot be denied and is omnipresent. So we can also do practical jokes. Good this way.

Facing a photo of Putin with the text “nuclear asshole,” Welke explained that Putin was quite open about the potential use of nuclear weapons. In that context, it sounded ridiculous that Russia is bidding to host Euro 2028 or 2032. “No kidding,” Welke said, “I wish I was one.” He still didn’t want to believe it. “An EM in Russia? Crazy. Why not a World Cup in Qatar right away? No, wait…”

Regarding Putin’s demand that (among other things) Germany should in future make its daily (!) payments for oil and gas worth 200 million euros in rubles, Welke said: “We should say: Put your raw materials elsewhere!” Germany should go ahead with the embargo. “After all, with Nord Stream 2 we encourage you to be more and more aggressive.”

But the government is still holding back. Also, according to Welke, on the issue of refugees. “The voluntary commitment of citizens works,” she said, reporting that around two-thirds of the 230,000 Ukrainian refugees who arrived in Germany could be housed with private individuals, but: “The federal government is doing a thin foot.” After more than a month of war there is still no national crisis team. Not surprisingly, things go wrong with the distribution and transportation of those seeking help. Welke: “It’s the old game. The federal government sees the states as having an obligation, the states as their cash-strapped municipalities.” A working group must now clarify who should pay for what. Welke cynically: “Sure, 10,000 refugees come to Berlin alone every day and we’re setting up a circle of chairs.” And that in the face of the largest wave of refugees since World War II.

“Give business a chance!”

Germany is (once again) teetering on the brink of poverty. The fact that German companies continued to make money in and with Russia also struck the satirists and they gallantly implemented it. Valerie Niehaus and Holger Stockhaus reported live from the “Peace Gala” at the “Gliss Hair Repair Arena” in Düsseldorf. Here they wanted to celebrate the German companies that, despite the war, “did not break the threads of conversation and business.” The slogan of “Businessmen for Peace” was sung to the tune of John Lennon’s peace classic: “Fuck the embargo, give business a chance. We need coal, give business a chance.” “.

Friedrich Küppersbusch explained in “Something with the media” that “Wladimir the Terrible” is not suitable as a role model, despite all the brutality, and warned “young dictators who are on the path to world domination and tyranny eternal”. If you’re wondering “how can I become a mega monster and still be a likeable influencer?”, you should stay away from Russia’s “despotic glitter terminal”. Putin’s self-portrait is “as trendy as a selfie with a pound of minced meat” and his “unisex style looks like a busted blood sausage.”

The 100-day anniversary of the semaphore government falls amid the turmoil of war and corona. Welke mocked that she even had to stay up all night to deliver a “relief package” and also pocket the 2022 budget. Although the latter “is already completely trashed,” because: “To meet the brake debt in 2022 would have to know how to do magic”.

Is the FDP ripping off its coalition partners?

Even Finance Minister Christian Lindner couldn’t do that, although he was quite creative in coming up with new words for debt. And doing exactly what he accused the “would-be finance minister Habeck” of the time during the election campaign. The FDP also made sure there was no more talk of citizen income or basic child safety, things that were anchored in the coalition agreement in November.

On the fact that, of all things, the smaller coalition party is constantly enforcing its will and “cheating” the two larger partners, there should soon be a Netflix series called “The Lindner Swindler.” Key Question: “Will the naive little semaphore ever break free from the FDP’s yoke?”

Matthias Matschke, a self-confessed green man currently struggling to swallow, also seems to have his doubts. He watched with saddened eyes as “his own finance minister sells like a petitioner to the sheikhs as a one-man column.” What can you do? “As a green, you want the federal government to first force Bavaria to finally build fucking wind turbines.”

Meanwhile, something like “normal” is returning to Germany at the weekend: state elections (in Saarland) are approaching. Not only the local politicians are shaking there, but also Friedrich Merz. It is the first election that falls in his reign as leader of the CDU. More will follow in 2022. Welke: “This year the CDU can ruin four state elections: Saarland, Schleswig-Holstein, North Rhine-Westphalia and Lower Saxony.”

Since the Merz is already shaking in March, also because he and his party have not yet found their opposition role. Welke: “Voters don’t like to shoot the government in wartime. Especially since it was Merkel’s CDU that made us dependent on Russia.”