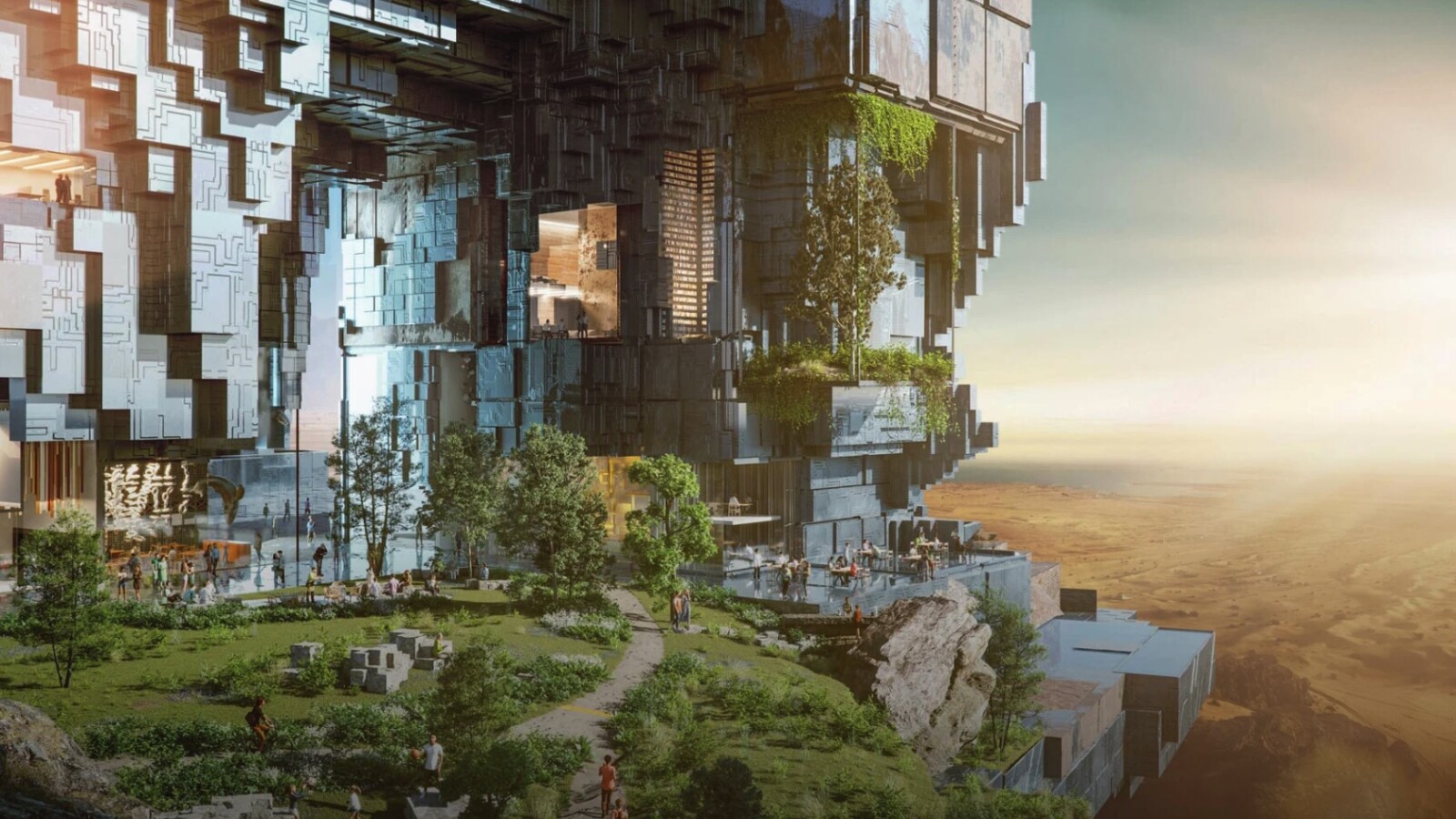 Could you imagine living in a skyscraper 170 kilometers long with nine million other people? Saudi Arabia is preparing something gigantic! The Apple-Netflix deal would also be gigantic, should it come to fruition. With a new kind of camping lantern under his arm, Michael greets us on behalf of the editorial staff, all dishevelled by the wind from the electric bicycle.

You see the article form of our weekly newsletter “Hallo Netzwelt”. If you don’t want to miss an issue from now on, subscribe. Click the button at the very end of this article.

“The Line” – you should remember this name, because it could become some kind of wonder of the world to come. Crown Prince Mohammed bin Salman – currently on a much-discussed trip to Europe – is planning the tallest man-made structure in the Saudi Arabian desert.

His vision seems breathtaking. Because mankind has so far ignored the environment when building cities and built too much across the width, he wants to lengthen “The Line”. The car-free city will stretch 170 kilometers (!) through the desert and end in the Red Sea.

Future residents can look forward to organically grown vegetables on the one hand and high-speed trains running under the mega structure on the other. Amazing what is supposed to happen at astronomical costs. We’ve compiled more information about “The Line” for you here.

Let’s stay briefly in the future. In most of the utopias that we know, flying cars play a role. Electrically powered, self-flying vertical take-off and landing (eVTOL) objects have been in development for a long time.

Volkswagen has now introduced such a passenger drone in China. The black and gold painted “Flying Tiger” should be able to fly four people and their luggage automatically up to 200 kilometers on a single battery charge. Look at this.

High on drugs: a fan wants to have seen the map of GTA 6

In our world full of leaks, insider information, and analyst oracles, anyone who wants attention needs to have extraordinary contacts. Reddit user “ChurchofGTA” is neither a leaker nor an analyst. Instead, he found a flawless way to get top-secret information about GTA 6: mind-altering substances.

These made him hallucinate the map of the highly anticipated game. Moreover, he even wants to have played through countless missions in a foggy mind. Never mind. After the next visit to the beer garden, he will surely come around the corner with burning information about the Apple car…

Ah, chess – the game of things, kings. So calm, so non-violent. A seven-year-old boy might see things differently. He was seriously injured during a tournament.

The incident did not happen because his opponent did not want to accept defeat. Instead, a chess robot “freaked out” and broke the little boy’s finger. crack. The organizer says that the boy did not follow the safety rules. What happened? Did he want to stumble with his horse? A video camera captured the strange incident.

Here are some other top stories of the week

As a married couple, Kevin and Beverly Harvey have been through ups and downs together and traveled extensively. It suddenly came to an end when Beverly, now 89, fell ill with Alzheimer’s disease. Joint excursions with the e-bike were no longer possible for safety reasons.

Kevin just didn’t want to accept that fact. On his own, he modified a used e-bike and welded it onto a wheelchair. Now the two are once again exploring the beauties of their home country of New Zealand together. Touching, we think. “His bloody duty,” someone wrote on our Facebook page. Finally, the man made a promise. After all, it means “in good times and in bad”. We couldn’t have said it more romantically…

Friends of the network world, we only smile fiercely about this video on TikTok. A 14-year-old tried to convince his parents to play GTA 5 online. Among other things, the title is valuable for its development. The game is only released from 18 years old. And how do today’s children convince their parents? That’s right – with a self-created PowerPoint presentation. By the way, Netzwelt served as a source for the boy. We are honored – let the boy (under supervision) play! At least it’s better than taking drugs.

With this refreshing idea, your heini newsletter says goodbye to the weekend. have a voucher! Here’s the joke of the week. We’ll meet again in the ticker or next Friday at the latest. Until then, stay safe from violence and drugs, but always in an intoxicatingly different way, in short: top newsletter readers on both sides of the Elbe. Goodbye!

The kidnapper on the phone:
“I have bad news and bad news…

There are even more flat jokes at this point on Netzwelt.

A lot of effort goes into it. We look forward to a recommendation!

Are your friends not fooled either, making fun of each other when they joke about something and being interested in the latest topics from the tech world? Then forward this newsletter by clicking on the following link. If you have any comments on this newsletter or just want to share your opinion, please write to us at [email protected]