Hectares burned rise to 600 in Verín, with fires still near homes but “more favorable” development 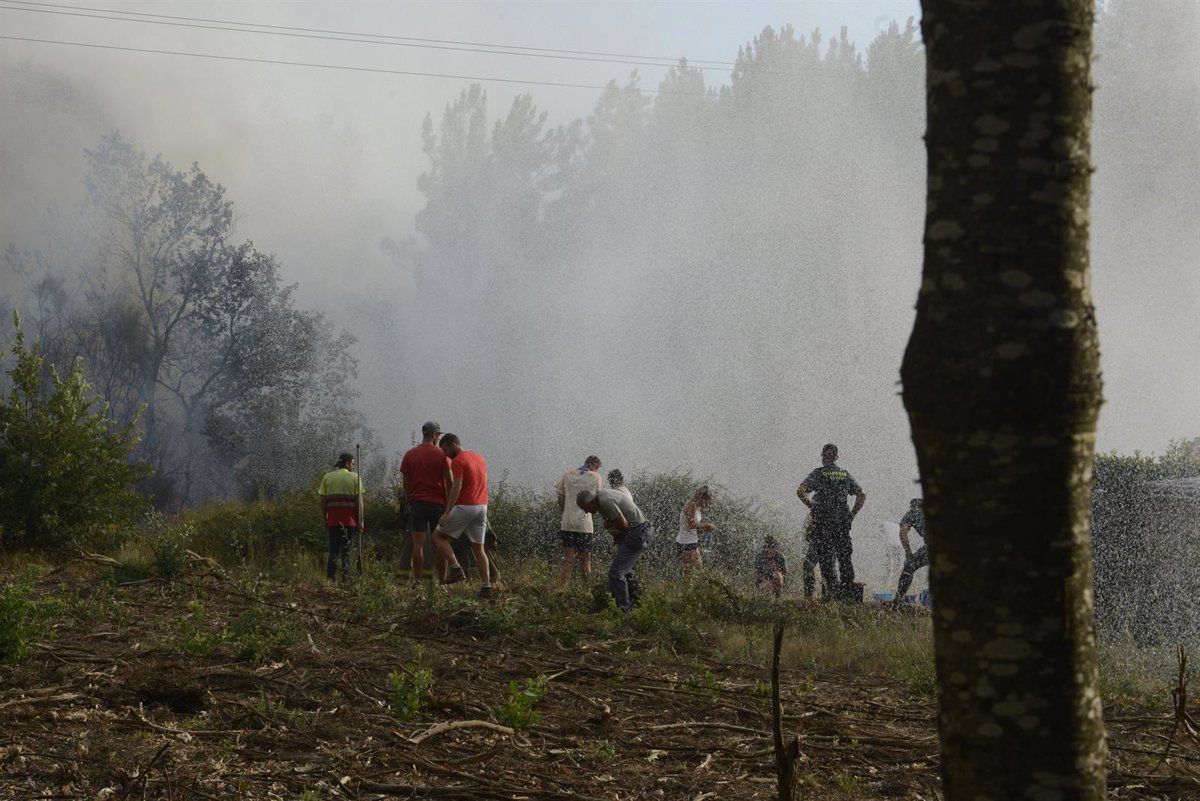 The largest unextinguished fires in Galicia are concentrated in Ourense and Pontevedra, reaching nearly 1,500 calcined hectares

The fire, which broke out in Verín (Ourense) shortly before 3 p.m. on Wednesday with more than a dozen outbreaks, has already destroyed 600 hectares according to preliminary measurements, although the development is “favourable”. In any case, and although there is no danger to inhabited areas, due to the proximity to residential areas, the state of alert is maintained.

In its last part, the Ministry of Rural Environment confirms that the fire is still active but developing well. It was also ratified by the head of the regional department, José González, in an interview with Radio Galega collected by Europa Press.

The media is now focused on the task of clearing a “very difficult to access” flank, a task to which the air media will also contribute as soon as possible.

This fire has resulted in the eviction and confinement of some neighbors – although they have been able to sleep in their houses again – cuts on the A-52 and N-525 (reopened to traffic after only two hours) and minor damage to property. Businesses in the Auga de Sousas factory.

Both the Rural Environment Minister and the city’s mayor, Gerardo Seoane, have influenced the “intentionality” of this fire, which was started in more than a dozen different sources.

To fight the fire, 4 technicians, 11 agents, 23 brigades, 11 motor pumps, 2 shovels, 1 technical support unit, 9 aircraft and 11 helicopters worked. The Military Emergency Unit (UME) has joined the duties to try to control the blazes and they have also worked with the Civil Guard, Civil Defense and the Portuguese media.

TO MEZQUITA, MACEDA AND CALVOS

The largest fire of those that are not extinguished in Galicia is that of Verín and reaches 600 hectares. But overall, the largest fires reported from rural areas, concentrated in the provinces of Ourense and Pontevedra, cover about 1,500 hectares. After that in Verín, that in Mourentán in Arbo (Pontevedra) has burned the largest area in recent days, totaling 400 hectares devastated.

In the province of Ourense, in addition to the Verín fire, another forest fire has been active since 5:41 p.m. this Wednesday in A Mezquiza. It started in the municipality of O Pereiro and has already burned 150 hectares, although rural areas have been shifted to develop favorably towards stabilization and without affecting the villages.

And if, in the case of Verín, the authorities are pointing to intent with a dozen outbreaks, they are doing the same in the case of the fire, which is still active in Maceda, having burned down another 150 hectares, according to preliminary measurements.

The fight against the Maceda fire, which began with three separate and simultaneous outbreaks in Castro de Eduardo, is progressing “favorably” towards its stabilization without affecting the villages. It started from three different and simultaneous focal points in the parish of Castro de Escuadra.

And at 00:46 this Thursday, the fire that broke out in Lobás in Calvos de Randín after destroying 50 hectares was stabilized. 1 technician, 11 agents, 34 brigades, 17 motor pumps, 3 shovels, 3 airplanes and 7 helicopters worked on its obliteration.

In the province of Pontevedra, the concern is concentrated in the town of Arbo, where in the last day a new fire entered from Portugal, which is still active and is still activated with “Situation 2” as a preventive measure by the proximity of the flames to the Polygon Industrial .

This fire, registered in the municipality of Barcela, has burned 70 hectares and is developing positively towards its stabilization, according to Rural Environment, indicating that no villages are affected.

But the fire that broke out in the municipality of Padróns in Ponteareas and burned 20 hectares is still under control. 11 agents, 24 brigades, 16 motomboas, 1 shovel and 1 helicopter worked to fight the fire.