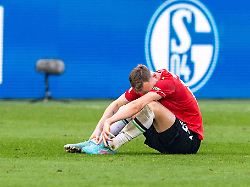 Gelsenkirchen (dpa/lni) – After their fourth consecutive loss in competition, Hannover 96 are still in the fight for relegation from the 2nd Bundesliga. Lower Saxony also lost 1-2 (0-1) to FC Schalke 04 on Saturday. The goals in front of 55,152 spectators were scored by Ko Itakura (minute 43) and Rodrigo Zalazar (minute 54). Cedric Teuchert (49th) only managed to match for the dedicated 96ers.

Schalke have now collected six points from two games under new coach Mike Büskens and are within range of the top three on 47 points. The 3-0 in Ingolstadt was led by the Schalke coach from the quarantine. Hanover still has 31 points and is therefore just four points clear of the relegation spot.

The guests, who changed five positions, made life difficult for Schalke for a long time. Hannover could have taken the lead, but after a corner from Sebastian Kerk the ball hit the post (32′). At Schalke, only Simon Terodde initially posed a threat (13th and 25th).

Shortly before half-time, however, there was a standing ovation when, after a corner and dismissal of debutant Marius Lode Itakura, he put the ball into the lead with a low shot. Teuchert scored shortly after the break from the return with a shot into the far corner to make it 1-1, but the hosts responded quickly when Zalazar took the lead again from a sharp angle.

- Advertisement -
Share
Facebook
Twitter
Pinterest
WhatsApp
Previous articleSurprises and penalties.. 4 scenes from the list of the Algerian selection for my Cameroon sites
Next articleI was in El Salvador, where bitcoin is accepted everywhere, and I think your risky crypto experiment could work.