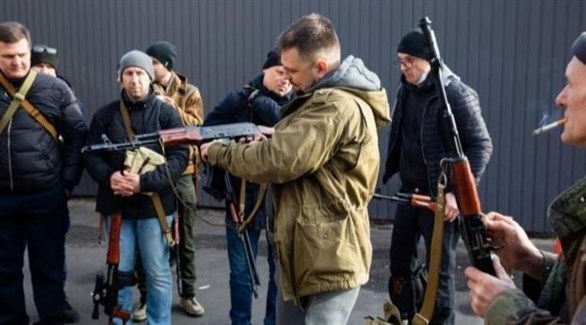 About half of Ukrainians between the ages of 18 and 55 expressed their willingness to participate directly in the fight against the Russian invasion, according to a survey carried out by several European researchers, despite the restrictions imposed by the war.

The percentage among men reaches around 70%, while among women it is around 30%, according to an opinion poll published by the Oslo Peace Research Institute (PRIO) with the support of the local pollster InfoSabience.

The representative sample of the survey exceeded one thousand Ukrainians, whose age was considered to allow them to participate in the resistance, and was carried out despite the obstacles imposed by the war.

Forty-nine percent of those surveyed said it was “extremely likely, likely, or somewhat likely” that they would engage in “assisting the resistance by engaging in direct open-field military combat against Russian or pro-Russian forces,” according to the BRIO Institute. .

Three-quarters of the participants (75 percent) expressed their willingness to volunteer “to help war victims, such as wounded civilians and soldiers,” while 80 percent confirmed their willingness “to help the resistance.” providing non-military support to the Ukrainian forces (food, information, ammunition, etc.)”, according to the Oslo Research Institute.

The Norwegian Institute considered in its analysis of the results of Saturday’s survey that “the rush of the Ukrainian people to fight against the invaders is exceptional.”

A month after the start of the conflict, the Ukrainian resistance surprised many military analysts, and the Russian offensive currently appears to be largely failing.

The survey showed that the motivation for resistance increases among respondents who were directly affected by the Russian attacks.

At the time of the survey, one in five respondents said they had been directly attacked by Russian or pro-Russian forces, and this group was the most willing to join the resistance.

“The determination with which the Ukrainians are fighting increases with the terrorism directed against them,” said study co-author Henrik Bartosevisius.