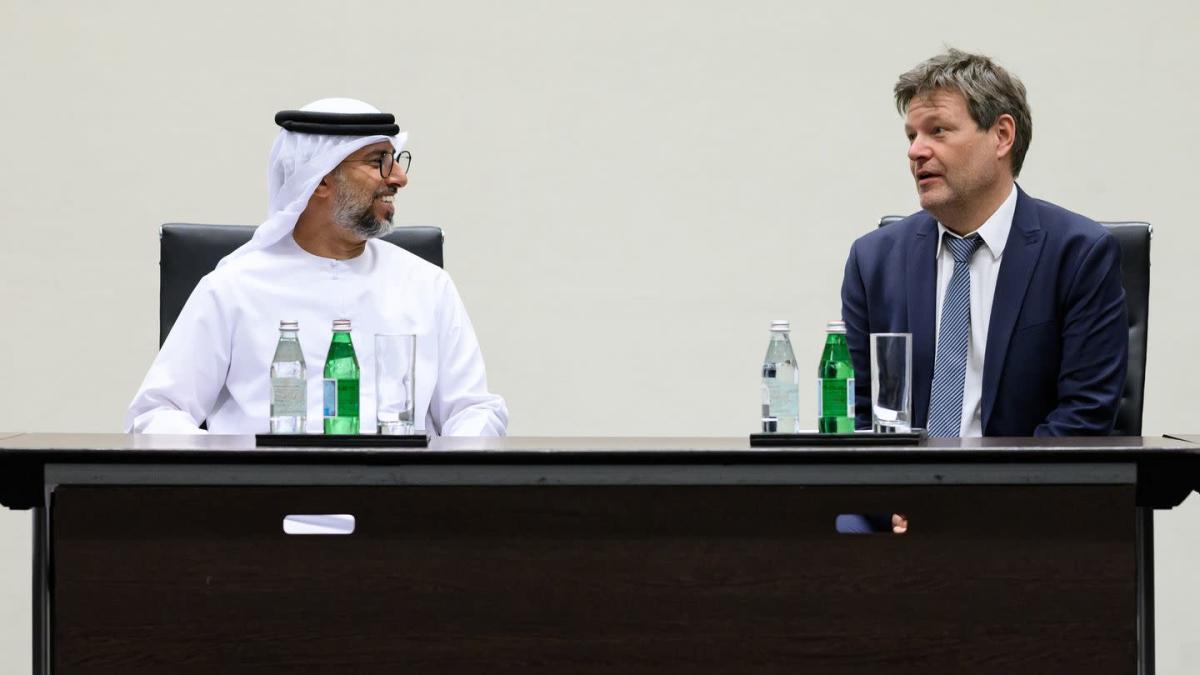 Abu Dhabi (dpa) – Robert Habeck is standing in front of a solar system in the desert, a place that should one day be important for the energy transition in Germany.

With green hydrogen, which is produced without CO2 emissions on the basis of renewable energies, the enormous transformation process will be made possible, for example, in the German steel and chemical industry. The United Arab Emirates should be an important partner in this.

After his visit to Qatar, Habeck flew to Abu Dhabi, the capital of the United Arab Emirates (UAE), and met with a number of ministers on Monday. The United Arab Emirates relies heavily on solar power and wants to become a “global player” when it comes to green hydrogen. Habeck also visited the planned large ecological model city Masdar City near Abu Dhabi and a nearby solar plant on Monday.

In Qatar on Sunday, Habeck worried about starting deals for German companies to supply liquefied natural gas (LNG), the goal: to reduce dependence on Russian gas. However, in the long term, Germany wants to move away from fossil fuels, and this is where the United Arab Emirates comes into play. The hydrogen cooperation between Germany and the United Arab Emirates will now be accelerated.

According to the ministry, the UAE had very good prerequisites for profitable hydrogen production from renewable energies. The projects are very advanced. The first hydrogen deliveries to Germany should be possible in 2022. During Habeck’s visit, five cooperation agreements to establish a hydrogen value chain between Germany and the United Arab Emirates were signed.

Green hydrogen: only at the beginning

In the industry, however, there is talk of a “marathon race”, green hydrogen is just the beginning. Habeck said that in the meantime blue hydrogen would be used, that is, the separation of CO2 molecules and storage in the Emirates. “We just don’t have time to waste.” You can’t wait 10-15 years until there is enough green hydrogen to “change” coal.

Habeck wants more speed. “The faster we are with hydrogen, the less gas we will need.” Habeck said that he could not predict the speed. “But now everyone can see that the old plans are not enough.”

Germany should be CO2 neutral by 2045. To do this, the production processes in the steel and chemical industries, for example, must be completely reconverted. Only the ThyssenKrupp steel group needs large quantities: CEO Martina Merz was part of Habeck’s trade delegation.

It is true that the proportion of green electricity coming from the wind and the sun in Germany is going to increase enormously. “We can produce a lot of electricity ourselves if we’re good at it, but we’ll always have to import power,” Habeck said. But Germany should not make the mistake of concentrating on one state: that is the lesson learned from Russia’s dependence on fossil energy imports. “We have to position ourselves more broadly,” Habeck said. Also, like Qatar, the UAE is not an easy partner due to the human rights situation.