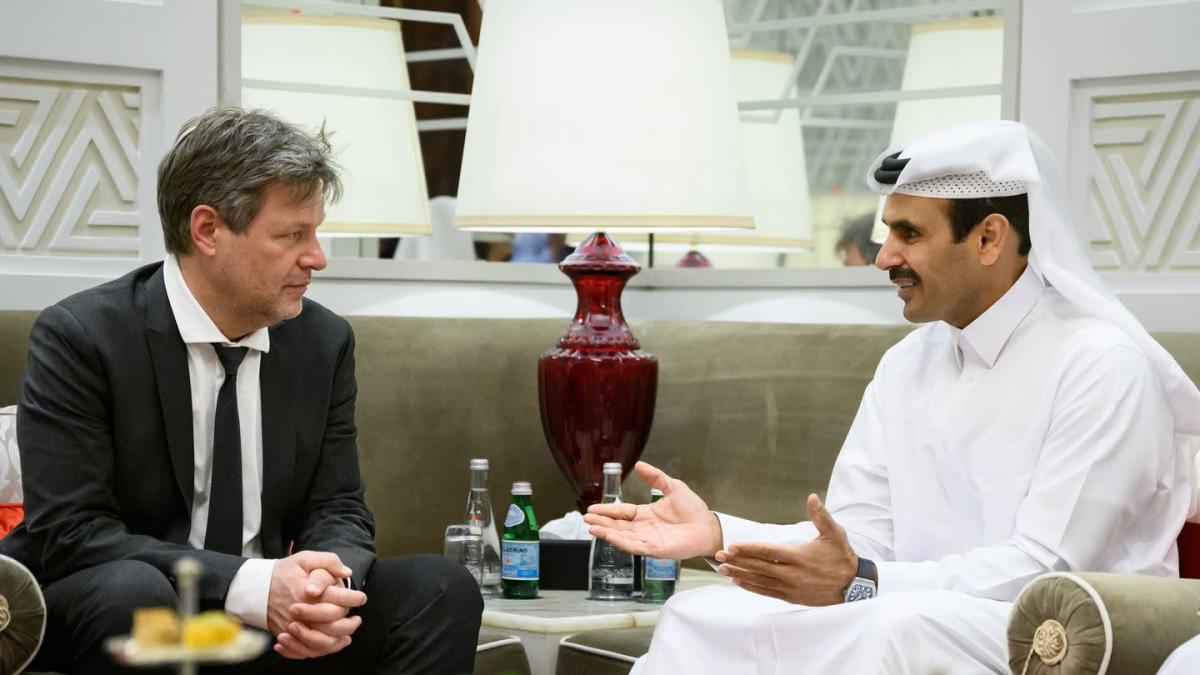 Doha (dpa) – This is a step on the long road to gas “without Putin”. Robert Habeck has just returned from a meeting with the Emir of Qatar, which apparently exceeded his expectations.

It was “very” agreed to enter into a long-term energy partnership, the Federal Minister of Economy said in the Qatari capital Doha. The companies that accompanied him to Qatar would now enter fully into contract negotiations with the Qatari side.

And the Greens politician sent a message to Russian warlord Vladimir Putin afterwards: “If we still need Russian gas this year, not in the future. And that is just beginning. So if you have ears, listen.”

The Russian war of aggression in the Ukraine caused a turning point in German energy policy. Until now, the share of Russian imports in fossil gas imports to Germany is about 55 percent. That is why Habeck vehemently rejected an embargo on Russian deliveries and warned of serious damage to the German economy.

The way out now should be: diversify the delivery structure, i.e. put it on a broader base, and not just rely primarily on one card. “The road consists of many milestones,” said Habeck. That is why the minister has already been to Norway, according to his own words, has already held talks with Canada, and has traveled to Qatar this weekend. The emirate is one of the largest exporters of liquefied natural gas (LNG) in the world. So far, Qatar has delivered mainly to Asia, but intends to expand its capabilities significantly in the coming years.

The trip was triggered because he knew that German companies were in contract negotiations with Qatari companies, Habeck said. These negotiations, however, would have needed a “motivational push”.

Qatar is an important place

Habeck sees himself as a “door opener” for the German economy, and his Doha program is impressive. In addition to the Emir, he met with the Minister of Economy, the Minister of Foreign Affairs and the Minister of Energy. This is seen as a sign of appreciation in the German delegation, in which numerous high-ranking managers are also represented: the director of Thyssenkrupp, for example, or the directors of Bayer and Siemens Energy.

RWE boss Markus Krebber says that the region and Qatar in particular is an extremely important place for energy supply for the whole world and thus also for Europe: “Since we in Germany now want to diversify, the importance will increase again.

Qatar is a critical element in Habeck’s strategy, which includes short-, medium- and long-term goals. In the short term, LNG deliveries from Qatar should also help secure Germany’s gas supply for next winter. So far, this has not been the case, according to Habeck. In the medium term, LNG gas from Qatar should also land at planned German LNG terminals in Brunsbüttel, for example, requiring supply contracts with German companies.

Although LNG gas is more expensive than gas from Russian pipelines, no one can predict how the war in Ukraine will continue and whether Putin will cut off the gas supply after all. That is why an own LNG terminal should also be a kind of insurance for a stable energy supply in Germany.

However, in the long term, and this is the biggest goal, Germany wants to get rid of fossil fuels completely. Climate neutrality will be achieved in 2045. This is also where the United Arab Emirates comes into play, where Habeck wants to hold talks on Monday. It is green hydrogen, which is produced without CO2 emissions based on renewable energy and is intended to allow decarbonisation in the steel and chemical industries, for example.

“The day had a strong momentum”

But the energy partnership with Qatar must not only include LNG supplies, Habeck said after his meeting with Emir Tamim bin Hamad Al Thani, but also the expansion of renewable energy and energy efficiency measures. Qatar, which has so far relied mainly on its gas, also wants to change. “The day has become very dynamic,” says Habeck. The Emir’s support was beyond measure and stronger than expected.

But it is not an easy journey for the German Minister of Economics and Climate Protection. Habeck himself speaks of a diplomatic “shaky ground”. Since the controversial World Cup award, attention has focused on the human rights situation in the autocratic emirate. Doha is being built and modified everywhere, the capital is preparing for the World Cup at the end of the year.

They are construction workers, mainly from India, Bangladesh, Nepal and Pakistan – whose difficult working conditions Habeck, in his own words, addressed in his meeting with the sheikhs. The Qatari side said he knew what to do: “It is unacceptable that people here live in poverty and are exploited.”

Qatar is the first Arab country to introduce a minimum wage, workers no longer have to work in the midday heat. But the question is how such reforms will be implemented.

- Advertisement -
Share
Facebook
Twitter
Pinterest
WhatsApp
Previous articleShawn Mendes talks about life after splitting from Camila Cabello: “I’m lonely and I hate that”
Next articleBashar al-Assad’s visit to the United Arab Emirates… the regional context and the importance of the moment