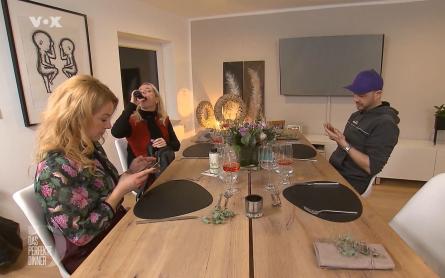 During her demanding contribution to the gourmet round in Mönchengladbach, Anna, who is otherwise very organized, gets lost in countless work steps. She only serves the main course shortly before 11 pm Dessert doesn’t even arrive until midnight. This is the conclusion of the guests: “That was… a long time.”

Anna (34) has a pragmatic and generous nature: the sprawling residential complex in Waat, ten kilometers south of Mönchengladbach, is proof of this. Once the workplace of Anna’s grandfather, a local celebrity as a former greengrocer and “Rheydt’s cauliflower king” (“People still come here and want to buy cabbage”), three generations of the green stuff dynasty now live here under one roof. The preference for regional products from the land is also reflected in Anna’s menu:

“It’s going to be a very, very wild number,” talkative Stephan (37) is convinced, and: “Definitely grounded.”

“If the man ever cleans the dishwasher…”

But first of all, the group has to identify the names of the vegetables. “Jerusalem artichokes? I know them as muffy potatoes,” says Martina (54) with some local color from the Lower Rhine. “Is that green?” Madline (33) wonders to herself, but she knows a lot about beets: “I heard they pee pink.”

What emerges from the ominous tubers, however, goes far beyond the end result: As a starter, Anna (“I used to eat just sachets”) served a colorful beet carpaccio with Jerusalem artichoke, both as a salad and with toasted chips. The finishing touch is a marinated shrimp, with which Marcel (30) immediately falls in love: “Explosion of flavor! I will dream of it tonight”.

But after the start, which set off a storm of enthusiasm, things got tough for Anna. First, she’s missing important equipment (“If the man ever cleans the dishwasher…”), then she has to give up pre-cooking the potato and spinach dumplings for the main course due to time constraints. The roasted crust made from pine nuts and walnuts is also complex, then the carrots should be glazed and cassis juice added.

“I’m usually asleep at this time”

In the meantime, he parks his guests at the “party bungalow.” The whiskey and hibiscus appetizer keeps her in a good mood, but when the main course isn’t on the table shortly before 11 p.m., at least Martina (“I’m usually asleep at that time”) and Stephan (“I already have such thing Kohldampf”) slight resentment.

Will it reconcile a little dessert? Good: Martina and Marcel think the walnut parfait is too sweet, and Stephan has had a “foam-wine trauma” since childhood: “What grandma gives him a seven-year-old foam wine for dessert?” he reminisces with a chill

But when the digestive vessels continue to rumble after midnight, Anna in particular is relieved: “Everything was a bit tight.” However, she received 31 points for her menu and finished second behind Marcel. And she returns to show her relaxed character: “That’s the way things are.”