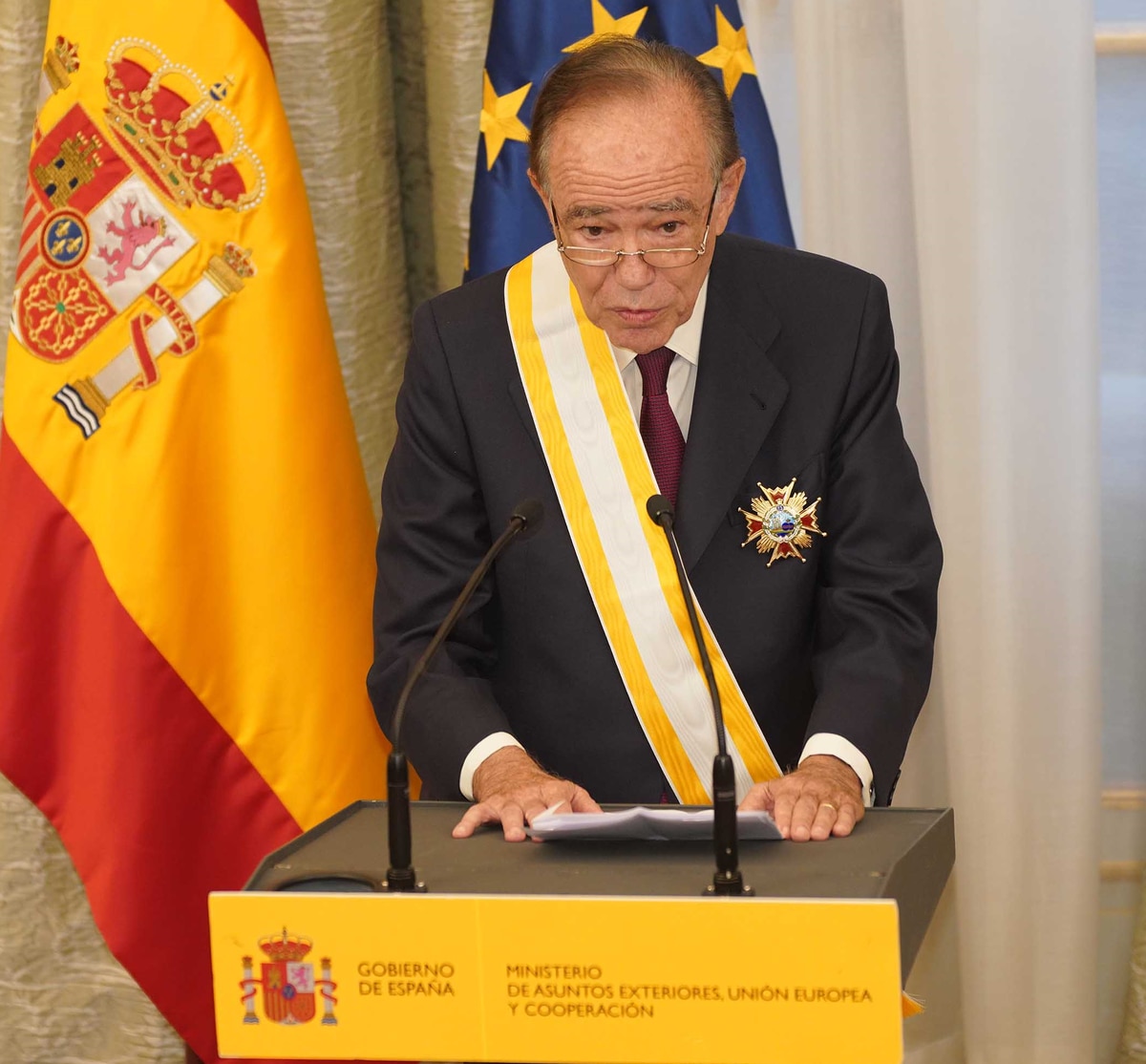 That Royal Order of Isabel the Catholic Fernando VII created it in 1815, it was reorganized in 1847 by his daughter Isabel II, and Juan Carlos I gave it a decree in 1998 detailing that it is granted “to reward those exceptional behaviors of a civil nature, that are carried out by Spaniards and foreigners who benefit the nation or who contribute in a relevant way to the promotion of friendly relations and cooperation between the Spanish nation and the rest of the international community”. Starting this Thursday Gregorio Maranon and Beltran de Lis (Madrid, 80 years old), President of royal theatre, he wears it on his jacket for himself.

The Viana Palace in Madrid, official residence and representative of the Ministers of Foreign Affairs, was the place chosen for the imposition by the current holder of the portfolio, José Manuel Albares. The Minister, who is also Grand Chancellor of the Order by virtue of his office – the Grand Master is King Felipe VI. – highlighted the intellectual for having “always been at the service of Spain in three ways: business, cultural and academic, at the service of the general public, civil society”.

“You have given the Teatro Real the place it deserves and you are the champion of the internationalization of our performing arts and our music,” Albares stressed when recalling Marañón’s merits. “In complex times marked by the Russian invasion, the importance of cultural work abroad becomes fundamental. Culture is the means to win peace,” he said.

Marañón, who defined himself as “progressive to liberal”, assured that with the award – one of the most important that Spain grants – he does not close “no stage” but “doubles the illusion and commitment of a beautiful journey”. ‘ who, to quote the poet Cavafis, wished it would take ‘many more years’.

The event was attended by, among others, the Minister of the Presidency, Félix Bolaños; Nobel laureate Mario Vargas Llosa; former President of Mexico Carlos Salinas de Gortari; the Secretary of State for Budget and Expenditure, María José Gualda; the Minister of Culture, Tourism and Sports of the Autonomous Community of Madrid, Marta Rivera de la Cruz; the President of National Heritage, Ana de la Cueva, and the Vice-President of PRISA, Rosauro Varo.

Marañón – lawyer, businessman and academic – joined the Board of Trustees and the Executive Committee of the Royal Theater in 1995, when its foundation was created. Academic number of Royal Academy of Fine Arts of San Fernando and the European Academy of Sciences, Arts and Letters, he is also Honorary Academician of Fine Arts and History of Toledo. He is also President of the Ortega Marañón Foundation, Patron of the National Library, the Royal Alcázar of Seville, the Army Museum and Honorary Patron of the Norman Foster Foundation.

He holds the Grand Cross of Alfonso X el Sabio and the Gold Medal for Fine Arts. He is Commander of the French Legion of Honor and Commander of the Order of Stella of the Italian Republic. physician matter of honour from the University of Castile-La Mancha, he won the Mariano de Cavia Prize in Journalism. Despite all these differences, he was touched on Thursday when the minister imposed the order on him. “For this gratitude. It moves me,” he said modestly.