Gregorio Marañón after receiving the Grand Cross of Isabel la Católica: “I redouble my enthusiasm and commitment” 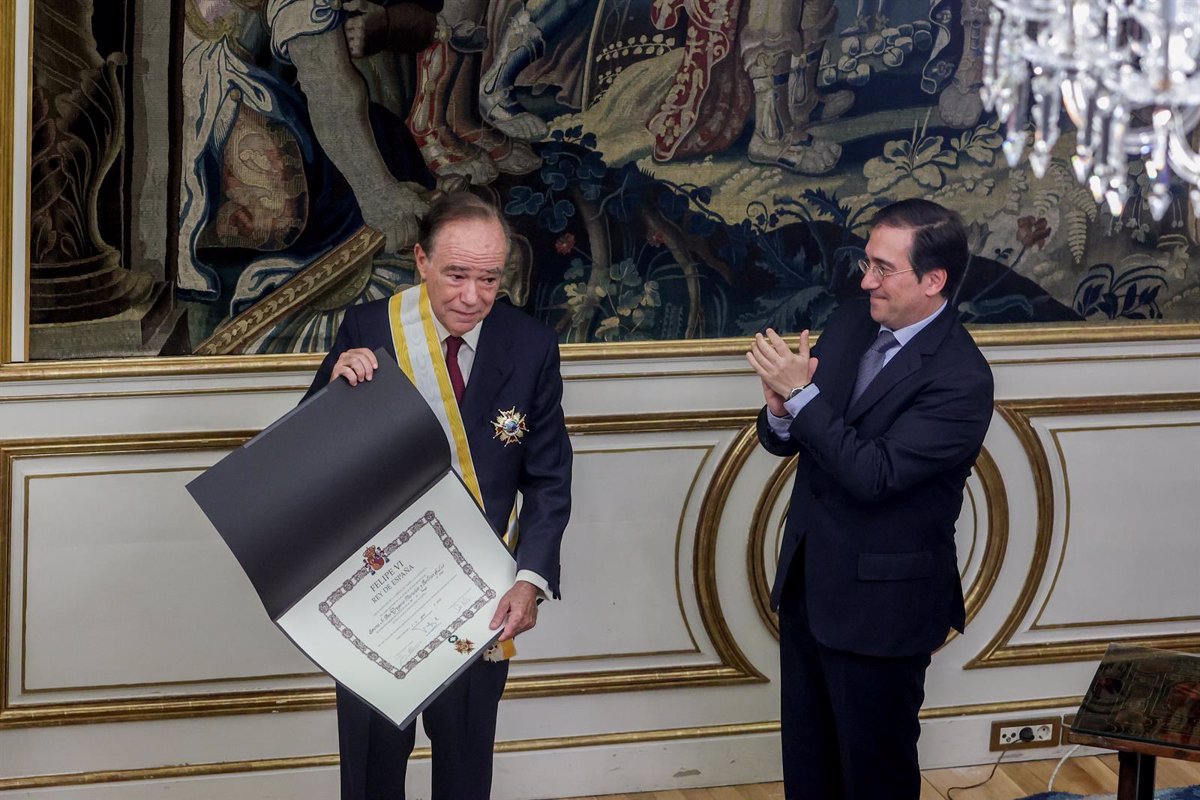 The President of the Teatro Real, Gregorio Marañón, assured this Thursday that “he will redouble his enthusiasm and commitment” to “continue the path” in his professional career after receiving the Grand Cross of the Order of Isabella the Catholic awarded by the Minister for Foreign Affairs, European Union and Cooperation, José Manuel Albares, for his “significant professional and personal career of exemplary dedication and commitment to the Spanish”.

Grateful is the winner, who defined himself as “progressive by virtue of a liberal” and “a person who is willing to come to terms with those who think differently and does not admit that the end justifies the means”, as his grandfather understood him Imposition of the Grand Cross and the “Generous Recognition” it signifies.

During the ceremony, held at the Palacio de Viana, the ministry’s headquarters, Marañón expressed his appreciation for the presence and support of numerous friends and family members. The Minister for the Presidency, Relations with the Courts and Democratic Memory, Félix Bolaños, also attended.

In this context, he indicated that he would redouble his efforts at the Teatro Real “with that ardent loyalty that appears as the motto of this award” in order to face “even more ambitious” challenges from now on in the different areas in which he bears responsibility.

“I’m not finishing any stages. A beautiful journey continues,” assured Marañón, who, quoting Cavafis, would like it to continue “for many more years”. “This commitment, together with the memory of this act, I will carry in the memory of my heart,” he said.

After reading the ministerial decree awarding the academic, businessman and art lover with the Gran Cruz de Isabel la Católica, at the request of the Ministry of Foreign Affairs, Albares dedicated a few words to Gregorio Marañón, highlighting his outstanding work.

“This award is complicated for me because I’m very aware that I’m doing it as a minister, but I’m also doing it as a person who values ​​you deeply,” he said.

In this sense, the minister stressed that Marañón has always been “at the service of Spain”, in all its commercial, cultural or academic facets. Albares has highlighted his capacity for international “protection” that he has given to Spanish culture. “They have helped to consolidate the level of excellence in the performing arts in Spain; Opera, classical dance, flamenco… They have projected all of this and continue to project it,” he added.

“In the last ten years that you have directed the Teatro Real, you have positioned it as one of the best theaters in the world, and believe me,” emphasized Albares, recalling the Opera Award 2021, the award received by the institution in last year.

He emphasized that in his work as President of the Teatro Real, Marañón embodied that commitment to promoting Spanish culture and art, which Albares says are “an engine of understanding, innovation and development in these times”. so convulsively” “They are the best bastions on which we can build our country’s foreign and domestic policy,” he added.

Finally, the minister insisted on the appreciation of Gregorio Marañón’s work. “You are the master of our performing arts and our music. I want to congratulate you on a whole life devoted to culture and the arts,” he stressed.

The event was attended by Nobel laureates Mario Vargas Llosa and Isabel Preysler, among others; former President of Mexico Carlos Salinas de Gortari; the Secretary of State for Budget and Expenditure, María José Gualda; the Minister of Culture, Tourism and Sports of the Autonomous Community of Madrid, Marta Rivera de la Cruz; the President of the National Heritage, Ana de la Cueva; Prosegur President Helena Revoredo; the Vice President of Prisa, Rosauro Varo; the President of the Royal Foundation of Toledo, Xandra Falcó; the writer Antonio Muñoz Molina; the journalist Iñaki Gabilondo; the general director of the Teatro Real, Ignacio García-Belenguer, and the artistic director, Joan Matabosch.

Marañón is also Chairman of Logista and Air City Madrid Sur and of the Board of Directors of Universal Music Spain. He is also a member of the National Heritage Administration Council.

ABOUT THE ORDER OF ISABEL THE CATHOLIC

It is currently regulated by Royal Decree 2395/1998 of November 6th, which approves the regulations of the Order of Isabella the Catholic and aims to “reward those exceptional behaviors of a civil nature carried out by Spaniards and foreigners, that of the nation benefit or contribute in a relevant way to promoting friendly and cooperative relations between the Spanish nation and the rest of the international community”.