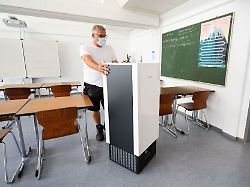 Already in November, the State Council of Parents criticized the slow rate at which schools in Lower Saxony were equipped with air purifiers. Education Minister Tonne initially campaigned for the opening of the windows for a long time. How is the situation now?

Hannover (dpa / lni) – In Lower Saxony, funds from a federal program for the installation of air purifiers in schools and kindergartens have by no means run out. Statewide, 5.6 million euros were requested, the Lower Saxony Ministry of Education announced at the request of the German Press Agency. 30 million euros were actually available, of which 19 million came from the federal government and 11 million from the state. The background may be the short period of time in which applications could be submitted, specifically between November 11, 2021 and February 15, 2022.

The left and the FDP had already criticized the slow implementation of the federal program in Lower Saxony in the autumn. Both parties complained that Education Minister Grant Hendrik Tonne (SPD) was leaving millions behind and blocking the installation of the filters. In September 2021, the federal government also criticized that the federal states were not doing enough to protect schoolchildren during the pandemic.

A spokesman for Minister Tonne rejected the criticism: even before the start of the federal and state funding program, school authorities could have used various state programs, under certain conditions, also to install mobile air filter devices. The state program “Protective Equipment for Schools” began in the fall of 2020. According to the spokesman, mobile air filter systems were installed in structurally difficult classrooms for one million euros. This program is almost sold out.

According to the ministry, the program will be relaunched in 2021, according to the spokesperson, among other things, automatic window ventilation for classrooms in school years 1 to 6 will be financed. In this case, the state will assume 80 percent and the school authorities. 20 percent of costs. At the beginning of the Corona period, Tonne repeatedly emphasized, with reference to scientific findings, that opening the windows and ventilating the room is more effective than installing air filter devices in classrooms.