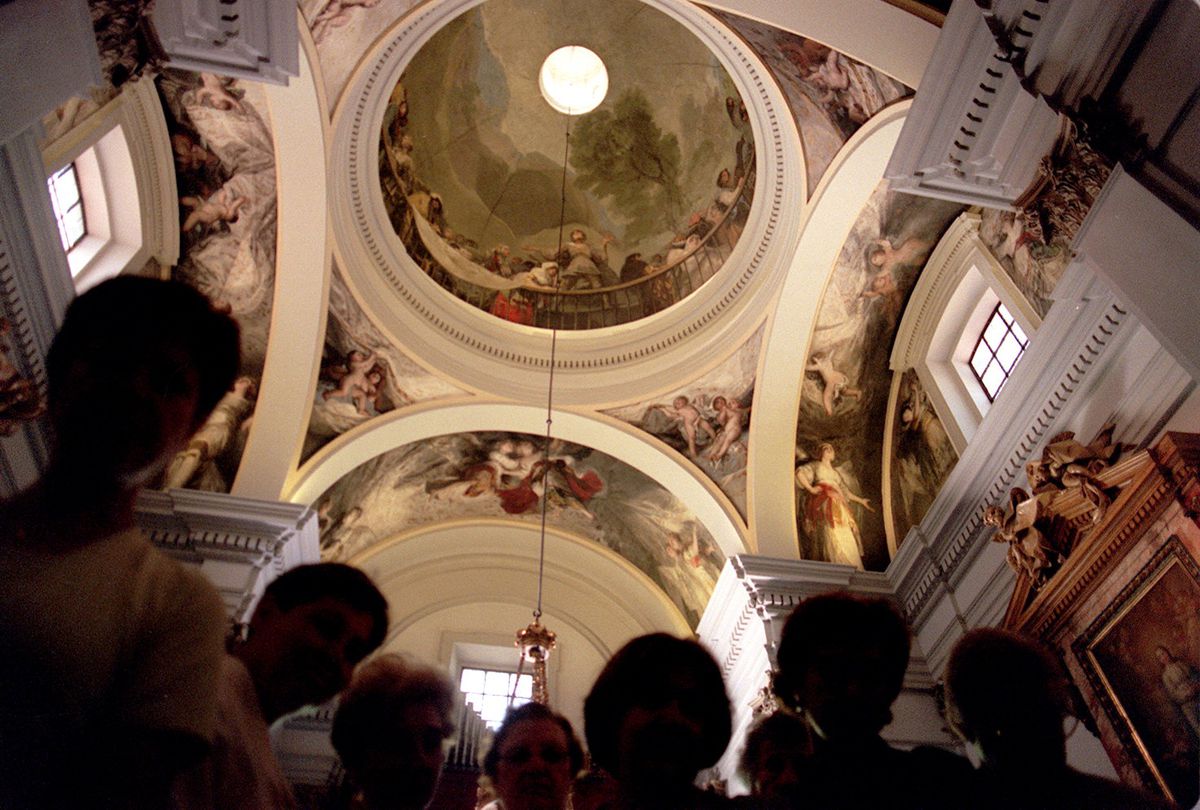 The frescoes by Francisco de Goya y Lucientes (Fuendetodos, Zaragoza, 1746-Bordeaux, 1828) in the Hermitage of San Antonio de la Florida in Madridin its dome, vault, pendentives and apse, in just four months at the end of 1798, represent one of the cultural wonders that can be enjoyed free of charge in the capital and a great example that synthesizes the amazing art of the painter from The executions of March 3. The sober neoclassical church, located a few meters from the Manzanares River, houses the free version that captured the genius of a miracle attributed to San Antonio de Padua. The paintings were last restored in 2005 Royal Academy of Fine Arts of San Fernando (Rabasf), who is responsible for the good artistic conservation of the complex, sent a letter to Ana de la Cueva, President national heritage, who owns the property, in which she warns of the need to “repair the roof of the temple to avoid possible leaks”, the President of the Academy, Tomás Marco, told EL PAÍS by phone. The June 7 letter was sent to Madrid City Council with a copy, as the hermitage is cataloged as a municipal museum. The Consistory took over its cultural management in 1987 after an agreement with Heritage.

The reason for the Academy’s letter stems from an event that occurred on Sunday, May 29, during opening hours to the public, when part of the roof slipped and threatened to fall into the void, injuring a visitor EL PAÍS learned from institutional sources. At the plenary session held by the Academy on June 6, participants were made aware of the incident thanks to a technical report by a restorer of the Hermitage, which, according to one of the participants, caused “great concern” among academics. A technician from the company in charge of the repair removed the piece, but as it was Sunday he could only replace it with another the next day, with the obvious risk that the paintings could be damaged in a few hours if there was one danger of storms.

“The paintings are in perfect condition,” clarifies Marco, who has headed the academy since December 2020. “They are not at risk in the short term, but they need to be taken care of, and a rehabilitation plan for the roofs has been approved for a long time, so we call on both institutions to act as soon as possible.” The letter expressly refers to “the seriousness of the situation”, for which “urgent repair” is required in order to “avoid risks to the safety of people and the integrity of the paintings”.

National Heritage has confirmed to this newspaper that such a repair plan is in place. “We will fulfill our end of the agreement.” However, work will “commence in 2023,” although these sources have not specified which month. “The cost will be 913,000 euros, it will take around 10 months and it will be funded with European funds from the Recovery, Transformation and Resilience Plan.” Heritage adds that scaffolding will be erected outside for this action, although not planned in principle is that the hermitage must be closed to visitors. “The roof will be refurbished including thermal insulation, restoration of facade trims, renovation of exterior carpentry, and inside, LED lighting will be installed in the chapel area and heating will be improved.”

For their part, local sources have pointed out on the matter that “the work on the roofs must be carried out by the competence of the National Heritage, as it is not a matter of maintenance, which in this case is the responsibility of the City Council.”

The frescoes of the Hermitage of San Antonio de la Florida were executed by Goya at the age of 52 in a moment of creative abundance, despite having been deaf for six years due to illness. The commission probably came from his friend Gaspar Melchor de Jovellanos, then minister to King Carlos IV.

The building was constructed between 1792 and 1798 based on the design of the Italian architect and painter Philip Fontana, commissioned by the same monarch. The small church with a Greek cross plan depicts the miracle of Saint Anthony in its dome with a false railing on which a multitude of figures lean. In this episode, the Franciscan was in Padua when he found out that his father was in Lisbon was accused of murder. Miraculously, he moved there and asked to see the deceased so that he could explain whether his father was guilty or not. Goya painted the central scene that the faithful saw when entering the main entrance of the time, the moment in which the saint, elevated on a rock, interrogated the deceased, who was naked, with folded hands and being held by a man.

Around him, the crowd mostly watches in awe at the scene that Goya staged in his time, not in the 13th century. Hence it included majas, children, beggars, peasants, a possible self-portrait and some enigmatic and sinister characters, a precedent for black paintings. All sketched and with brush strokes giving a sense of relief.

Declared a national monument in 1905, this popular temple has housed the remains of Goya, transported from Bordeaux, since 1919. As is well known, the artist is buried in the granite tomb inside, along with his parents-in-law Martín Miguel de Goicoechea, since both were buried in France in 1828. Also, Goya was missing his head when the remains were brought back. It has always been thought to have been cut in order to use it for phrenological studies, a 19th-century theory that held that certain psychic abilities were localized to certain areas of the brain.

In 1928, a twin church was built a few meters away to preserve Goya’s frescoes, given the great enthusiasm that the temple aroused among the people of Madrid, since Saint Anthony was the patron saint of young single women. The complex was restored in 1940 after a shell caused a hole in the deck during the Civil War; then, 1955, 1977… In 1987, when the heritage handed it over to the City Council, “the wall complex again showed serious damage”, informs the leaflet distributed at the entrance. Since then, successive campaigns to sanitize the temple and restore the frescoes have been carried out until 2005.

A panel inside shows exactly what this last intervention was like, filling in cracks, removing the dirt from the paintings and fixing the paint in some areas that they had lost. Til today. On Thursday June 16th, the usual scene of Spanish and foreign tourists inside the hermitage was repeated, staring at the dome and the three mirrors that help to look at it. Beside him, a guide explained the history of the frescoes to a group of elderly people, while the other visitors listened to his words to understand how Goya achieved what he called “the magic of the environment” in which some people, like the Spaniards, think Sistine Chapel.