Governor of Western Ukraine appeals to Germany in “Tough but Fair”. 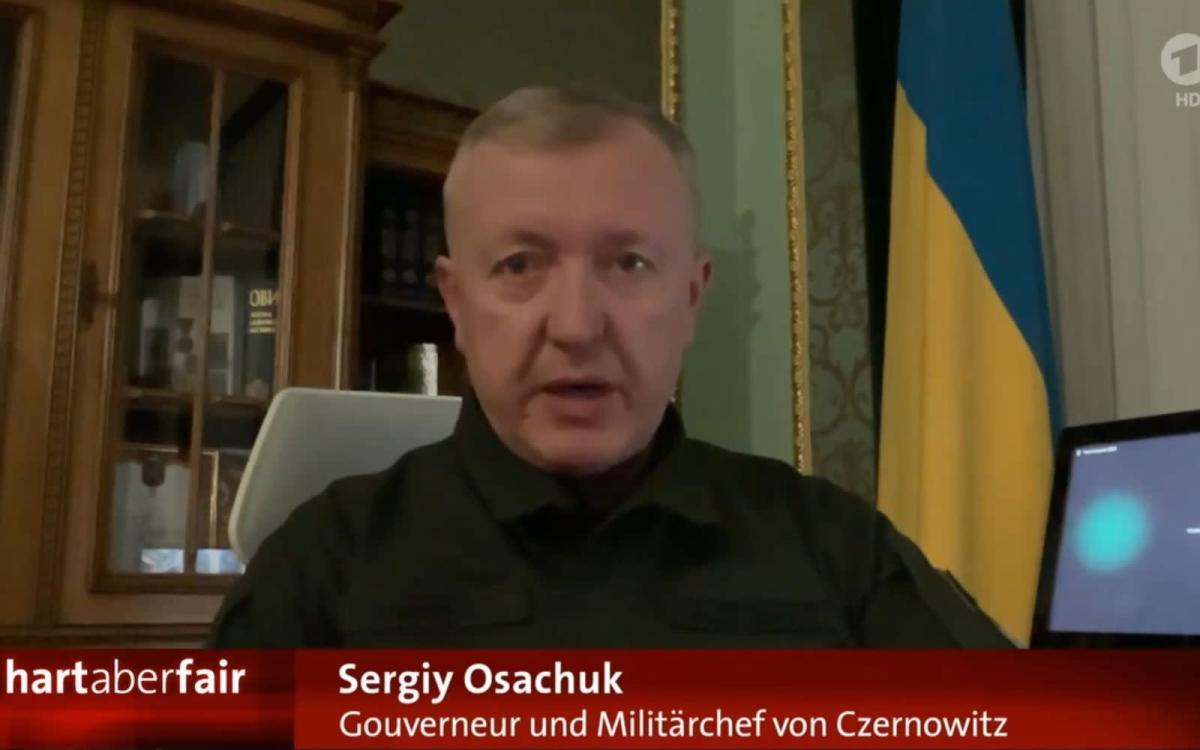 “Houses are on fire in Europe,” Osachuk explained, “and when a house is on fire, you don’t have to call the cleaners to clean it up, the firefighters have to come!” – In “Hart aber fair” Ukrainian regional politician Sergiy Osachuk spoke clearly.

“Fleeing from Putin: How can we help?” – The show’s title actually gave the direction of Monday night’s “Hard but Fair” talk quite clearly: Putin’s troops are “trampling” on Ukrainian cities, as host Frank Plasberg put it, and millions of people are fleeing – “many also for us”. The questions, according to Plasberg, are now obvious from a German perspective: “Are we going to show our friendly face in the long run this time, even if we realize that there will probably be problems with people? And what price do we have?” willing to pay?”

But the fact that the program had a completely different twist was due to a guest who was tuned in live from Ukraine: Sergiy Osachuk, governor and military chief of the city of Chernivtsi in southwestern Ukraine, filled his vision of things in a flash appeal that also appealed to viewers and viewers should have a more lasting effect.

“There is no longer a minute of peace,” emphasized the regional politician in his best German, in the face of the situation in Ukraine. No one is safe in the country anymore. The man in camouflage no doubt put his stamp on the program with his drastic language. “There is no way out, there is no alternative, because Putin wants to kill us. Putin does not tolerate the existence and freedom of the Ukrainian people,” Sergiy Osachuk said in an interview with Frank Plasberg about Ukrainian morality.

Among other things, Osachuk spoke of the “end of beautiful diplomacy” and “genocide in the eyes of Europe.” He called for more military support from Germany and the EU, mainly in the form of arms deliveries. “Houses are on fire in Europe,” Osachuk explained, “and when a house is on fire, you don’t have to call the cleaners to clean it up, the firefighters have to come!”

Taking care of refugees is important, the governor emphasized, but this is just a fight against the consequences of war. In his opinion, much more must now be dealt with the causes. Asked by Frank Plasberg, Osachuk specified that more weapons and even stronger economic sanctions are needed “to hurt Putin so badly that he stops today.” His unequivocal appeal read: “Please wake up, write it on your flags: instead of understanding Putin, we must build together a Europe without Putin!” The host was quick to reply that “the time for those who understand Putin” had “long passed.”

SPD party leader Saskia Esken was the first of the group to comment on Osachuk’s presentation. And her statement made people sit up and take note: When it comes to “tightening” sanctions measures, “the end of the road has not yet been reached,” she explained. “Sanctions are having a bigger and bigger impact, they are having a deeper and deeper effect. The Russian economy, and the Russian financial sector in particular, have been severely damaged.” Therefore, she believes “we are impressing with these sanctions.” Previously on the “Hart aber fair” program, Esken had already gone on record when asked by the moderator about an intervention by NATO soldiers on Ukrainian territory: “I think we have now reached a situation where we should never say ‘never ‘ to nothing.” For the time being, however, this would be a contribution to escalation. “And we have to be very, very careful with that.”

“All measures, short of the military, must be exhausted,” emphasized Katja Kipping (Die Linke, Senator for Integration, Labor and Social Affairs in Berlin). She understands the view of Ukraine, which is in a “self-defense situation”, but urgently warns of a level of escalation that will not only affect one country, “but will endanger the existence of the whole world”. Regarding the refugee situation, Kipping emphasized: “We have to ensure that children have access to education and that adults have immediate access to the labor market.”

In addition to Saskia Esken and Katja Kipping, Vassili Golod (WDR journalist with Russian and Ukrainian roots), political scientist Markus Kaim and Prof. Dr. Dirk Reinhardt (Director and Chief Physician of the Children’s Hospital of the Essen University Hospital) on the effects of the war in Ukraine that can already be felt and are still foreseeable.