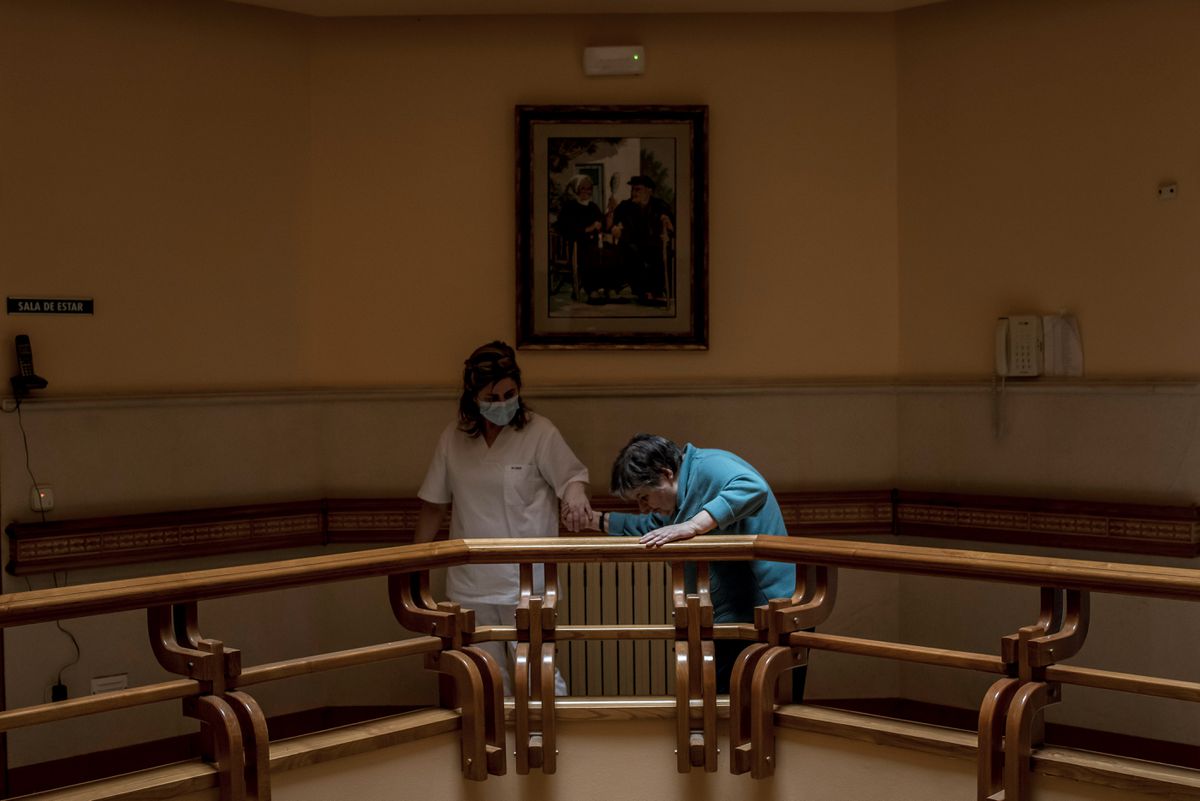 The Ministry of Social Rights and the Autonomous Communities this Tuesday approved the agreement that establishes the minimum requirements that care services in Spain must meet. In short, a new model of care and living. The document was approved with 10 votes in favor (Extremadura, Canary Islands, Navarre, Valencian Community, Asturias, La Rioja, Balearic Islands, Cantabria, Aragon and Melilla) and 9 against (Galicia, Madrid, Andalusia, Murcia, Ceuta, Catalonia , Basque Country, Castilla y León and Castilla-La Mancha, the only socialist government to have rejected the document). The aim is to change the form of care: that services adapt to people’s needs and preferences and not the other way around, as is often the case today. The dormitories will have to function more like a home, the construction of macro centers for seniors will be banned from now on (the maximum size will be between 75 and 120 places, depending on the location) and the demands on the staff will be increased. A transition period until the end of 2029 is planned for the conversion of the entire model, whereby the maximum size of the centers for dormitories that are already in operation will not be necessary. Negotiations were complicated and, in order to gain sufficient support, demands were made more flexible as the talks progressed.

The green light has now been given after last month’s setback when the department headed by Ione Belarra in a territorial council bringing together the ministry and the autonomies had to withdraw its proposal after verifying that it would not receive sufficient support. Extremadura and Asturias, both in socialist hands and which at the time expressed their opposition or intention to abstain, have changed their position. Autonomous sources who voted against explain that a major stumbling block is funding and that communities like Catalonia and the Basque Country have legal grounds.

This is one of the “most important agreements of the legislature,” Belarra defined in Congress last week. “One of the great lessons we learned as a society from this pandemic is that we need to rethink how we care for our elderly and also for people in a situation of dependency,” he added. Even before the arrival of the coronavirus, there was talk in the sector of the need for a change of course, and the European Commission has recommended it to Spain, as Secretary of State for Social Rights Nacho Álvarez has publicly reiterated in appearances in recent weeks. In fact, many autonomous communities are going ahead with their own regulations.

The problem in the course of the negotiations was how to combine such different positions. Pure bobbin lace. The tripartite talks began last July when the autonomies and ministry approved the principles by which the new model would be governed as EL PAÍS progressed. But alongside the municipalities, which have competence in the matter and whose voice is therefore essential for the text to have seen the light of day, the ministry, which has the task of coordination, has addressed the issue at the table of the social dialogue , which brings employers and trade unions together, and the Citizens’ Dialogue Table, which brings together associations and experts from the sector.

Seven out of 10 places are in private hands

A month ago, both the employers’ organizations and the unions expressed their opposition to the text. In Spain, seven out of ten places in care homes are privately owned, according to the CSIC. Last week, three employers (Aeste, Asade and Fed) again called for a “viable” solution, pointing out that the changes will increase the cost of a dormitory place by 50% (now they cost around €2,000 on average). . Another employer, Ceaps, became “quieter” after Álvarez specifically said the existing centers should not be resized to match the maximum number of places, but instead asked for funding. For their part, CC OO and UGT regretted a month ago that measures to improve the quality of employment had not been taken up and, among other things, branded the increase in staffing requirements as insufficient. This week union sources have indicated that all channels are still open with the ministry but that it needs to incorporate improvements to support the document.

The platforms of the residents’ relatives rated the text as a “great disappointment” with “rickety” personnel requirements that, among other things, do not solve “the problem of insufficient supply”. On the contrary, in recent weeks, experts in the sector, such as the Spanish Society of Geriatrics and Gerontology, and third sector bodies, such as the National Board of Elderly People and the Spanish Committee of Representatives of People with Disabilities, have given support to the document publicly , after a meeting with the Foreign Minister.

In Spain there is already an accreditation agreement, from 2008 and much more concise. This, which has now been approved, affects residential homes, day centres, telecare and domestic help services. Both for public services, as agreed, and for service checks (a money given to the person in need of care, who has to pay the rest of the cost out of pocket). The document lays the groundwork and gives the autonomies nine months to adapt their regulations to these new requirements.

“The new model suggests that telecare and home care must be prioritised, older people, yesterday and today and increasingly tomorrow, will want to continue to live in their homes and home environments,” the foreign secretary said last week. A regional source indicates that one of the major challenges is to increase home care hours (57.3 hours per month on average for the most severe care recipients in 2021). Where care at home is not possible, the aim is to make the apartments as homelike as possible so that people can bring their own furniture if they wish. Once the text comes into force, centers with more than 75 places in rural or sparsely populated areas, 90 in medium-density areas and 120 in cities can no longer be built. One of the innovations of the document that was recently on the table is that 120 places can be achieved in rural areas if “extraordinary circumstances of economic viability” can be proven.

Another novelty of the new document is that it introduces improvements in the types of contracts, for example that 80% must be permanent (in the social services, which include not only dependency, it is now about 66%, according to Imserso data).

Funding is undoubtedly one of the main obstacles to support for the deal, according to opposed regional sources. “It’s good that the state invites, but doesn’t pay,” said the President of Castile-La Mancha, the socialist Emiliano García Page, weeks ago. The foreign minister has reiterated in recent days that “funding must not be an excuse”. Álvarez has stressed that in just two years the ministry has doubled the public funds dependent and that at the end of the legislature the injection into the system with European funds to improve the care model will exceed 5,000 million euros.

According to the economic report submitted by the ministry to the autonomies and to which this newspaper had access, the increase in staffing required by the end of 2029 is to be found (in residential homes, one direct contract nurse is reached – including assistants of physiotherapists or occupational therapists approximately – every two residents) around 590 million euros are needed annually. Álvarez has said in public appearances that with the agreed level (part of the agency’s funding provided by the state) by 2023, which is expected to increase compared to this year (483 million), this amount can already be paid as planned within of six years, which means that if successive governments keep these numbers, it can easily be paid for. However, a regional source assures “that this money is not enough to meet all the requirements of the dependency shock plan: reduce waiting lists and improve services and working conditions in the sector”. Most of the funding for the system falls on the shoulders of the municipalities.

Independent sources who disagree with the document say they are not obliged to do so if the council votes against it. Ministry sources emphatically reply that yes, and that those who don’t risk receiving less funding as the agreed level aims to apply this model change.

- Advertisement -
Share
Facebook
Twitter
Pinterest
WhatsApp
Previous articleBuy PS5 and pre-order: You should keep an eye out for these retailers
Next articleSánchez’s partners ask him to correct his words after the deaths in Melilla and investigate what happened