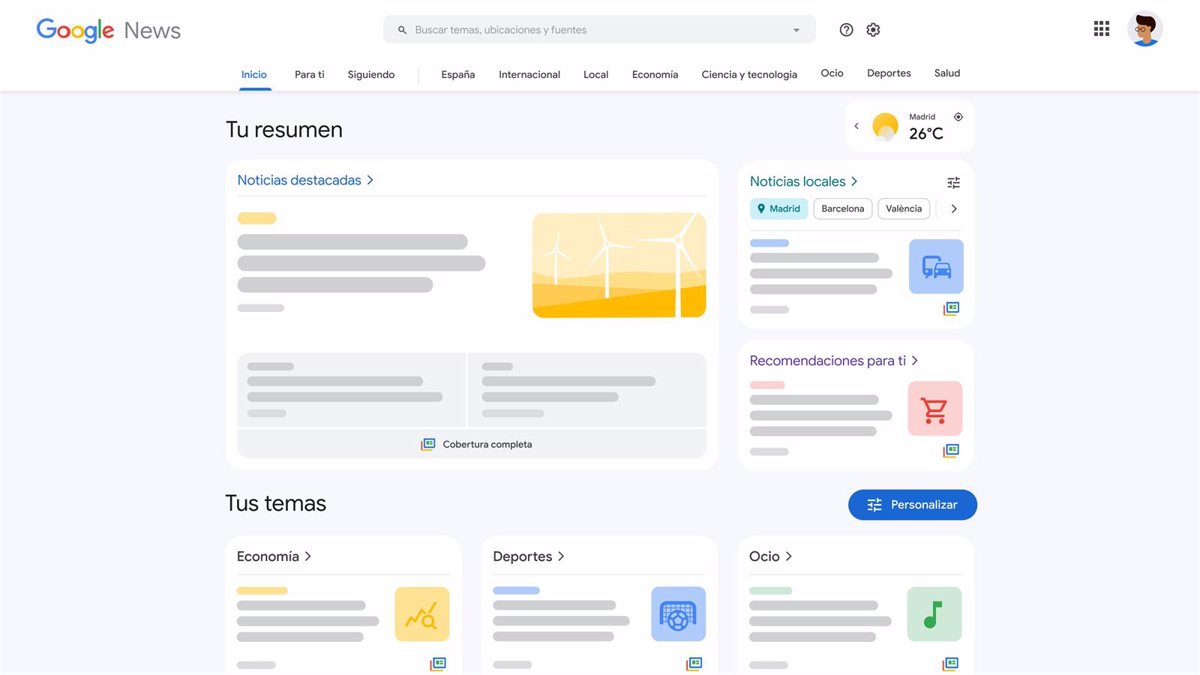 Google News has returned to Spain celebrates its 20th anniversary with a redesign of the user interface that makes it easier to find local news and allows you to add, delete or reorder topics of interest.

News aggregator and search engine Google News automatically tracks information from major online media outlets so users can, according to the company, “find updated information from reputable and reliable sources.

In December 2014, Spain became the first country in the world to offer this service due to the copyright lawwhich came into force in 2015 and provided for a right to financial compensation for editors from news aggregators.

In November 2021, the company announced that Google News would reopen “at the beginning of the year” due to the new royal decree approved by the Spanish government and implementing the European directive about copyrightas confirmed by the Vice President of Google Iberia Fuencisla Clemares.

This way and after a period of eight years, Google News is available again in Spain, both in a web version and in a dedicated application that will soon be available on Android and iOS, the company confirms it is a statement.

Google has also defined this service as “a key tool in the fight against disinformation” and has pointed out that it allows you to find more local stories and catch up on the latest national and international news.

Likewise, it has detailed how it works and recalled that this system benefits both readers and publishers. “Google News Direct readers to publishers’ websites when they click on links, which helps drive traffic to their content, where they can place ads and encourage readers to subscribe.”

On the other hand, Google took the opportunity to present a research carried out in April 2021 which showed that news consumption in Spain has fallen with the closure of Google News in the country, which means a 10 percent drop in hits on the websites of Spanish publishers .

To offer a more personalized service and to celebrate the 20th anniversary of its launch, Google has redesigned the user interface this platform. Among these changes, the restructuring of some sections stands out, as in the case of local news.

This section is now at the top of the page, above the Weather.com weather service, along with other sections such as Spain, International, Economy, Sport, Science and Technology, Leisure and Health.

You can also customize the topics of interest to access specific news faster. For example, in the Configuration section, you can put the fonts you want to hide on the main page, as well as the interface theme (light or dark).

While in “For you” the recommended content is presented according to the interests of the users and based on your previous searcheson the “Follow” tab you can add topics of interest, follow places, so the section recommends news about that place, as well as sources and media.

You can also save searches and consulted messages in this section for quick access at another time. Google has also integrated into the redesign of Google News a data verification section to provide more information about the news and its context.

In this way it will be possible, in addition to the headlines, to see the information verified and evaluated by organizations regardless of the medium or source that published these news.

The origin of the published data, as well as the contributions of other sources to this news, can be found in the section of ‘Around’ from each of these items.