GNTM candidate Vanessa is “sour, angry and offended” after makeover 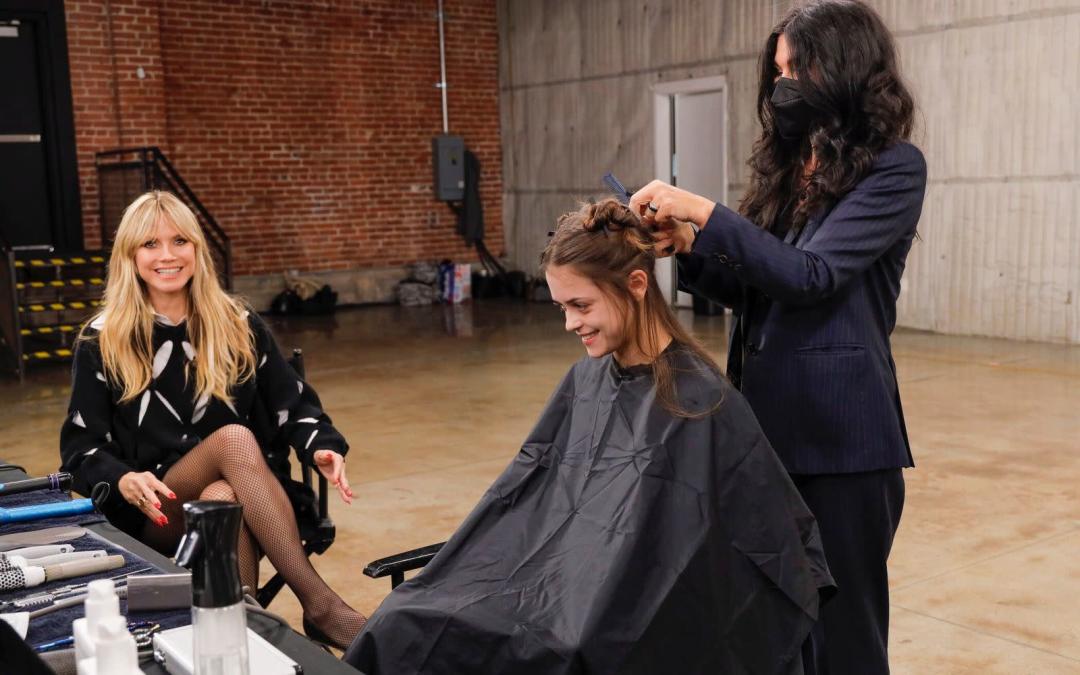 Colorful hair, perms and wigs: In the dreaded makeover episode, Heidi Klum and her styling team are particularly cheeky about the candidates’ hair this time. After her radical cure, Vanessa no longer likes to look at herself in the mirror.

Makeover alert! In the current episode of “Germany Top Model Germany”, Heidi Klum has her styling team in Los Angeles and forces a great hairstyle before and after the party. “It’s going to be radical, it’s going to be unconventional and it’s going to be colorful,” says Heidi happily, “this year we’re changing fewer girls than usual, but the changes are even more extreme,” sounds the 48-year-old.

Only eight of the 21 candidates are transported directly from the airport to a room where Heidi’s personal stylist, Wendy Isles, and her team are already waiting. The mood among future models: between euphoria and panic. Sophie (24): “I want to stay blonde, blonde is my personality.” Her biggest nightmare: a short men’s haircut. Competitor Noëlla, on the other hand, hopes to keep her hair short and no one moves extensions.

The first is Vanessa (20) from Metzingen. Heidi announces to the long-haired brunette that the “major change” is imminent. As the other candidates watch, strand after strand falls until Vanessa’s new style becomes apparent: a French short with bangs. But that’s not all: several layers of color are applied to her short hair. Vanessa continues to sink into her chair as Heidi cheers, “This is going to be amazing!”

When Vanessa finally sees the result in the mirror, she swallows hard: her hair shines a bright turquoise. In front of Heidi, the 20-year-old pulls herself together, but backstage she lets out her frustration: “As soon as I’m home, I’ll go to the hairdresser right away,” she sobs, “That’s really gross! “

How will her boyfriend react to the radical transformation? During the video call, Vanessa showed up crying shyly with her hood up. But her friend reacts with absolute confidence: “What madness, green! But that makes you feel bad! You look beautiful, you have so much talent that you are going to show it off ”, supports Vanessa. She is sincerely happy for the support.

Noëlla achieves the desired buzz cut and also a fresh color: purple. The 24-year-old is totally emotional: “Oh my God! I look so good. I feel really beautiful!” She smiles. She used to be very different. “At school they told me my hair looked like I put my finger in my socket,” she tells Heidi through tears. “I was ashamed of who I am.”

Heidi Klum is touched by Noëlla’s story and tells her that her children sometimes feel the same way. “Sometimes they come from school and tell me what they had to hear.” Something like that makes her very angry, according to the top model. She is impressed with Noëlla: “She has already achieved a lot at her young age and she will achieve much, much more”, she predicts.

Lieselotte hopes that with her new blond locks she can once again meet a handsome man. The 66-year-old: “So with this hairstyle she might have a chance with Patt Britt, ha ha!” Jasmin, on the other hand, has little joy in her makeover: Heidi chose a long-haired wig for her, which reminds her of top model Naomi Campbell. “I’ve never had such extremely long hair. It just depresses me a bit.” Shortly after Heidi bids her farewell, the young model takes her fate into her own hands, with far-reaching consequences.

While one group is renovating, the others move into a lavish model mansion in the Hollywood Hills. Viola deliberately keeps the ball flat as she sees the world famous Hollywood sign: “These are just letters standing on a mountain.” Anita, on the other hand, is delighted with the elegant building with a large terrace and an infinity pool: “All our people could live in this villa!”

When beds are assigned, older models Barbara and Lieselotte have some friendly gestures for the first time. Although the three older candidates like to spend the night together, Lieselotte would like to sleep in: “You’re such an early riser, that’s a bit difficult,” she tells Barbara. The 68-year-old can’t do much about criticism: “If you have a problem with it, then you shouldn’t be involved in something like that. It’s really too stupid for me to discuss it.”

“Extremely disrespectful”: Jasmin shortens her wig and flies away

In Elimination Walk, hopefuls have to climb out of an oversized powder compact and then strike three expressive poses, and photos are also taken directly on the catwalk. Barbara is already shaky as she steps out of the compact, then launches into poses reminiscent of her hobby, yoga. Heidi and guest judge Sarina Nowak (a former season 4 contestant and now internationally successful as a curvy model) are irritated: “Barbara, I think you’re great, but that was weird! The walk was very sloppy. The head doesn’t I don’t know what are your feet doing,” wonders Heidi. Sarina: “She only looked at you, Heidi!” The consequence: the oldest candidate does not receive a photo of Heidi and has to fly home.

However, Heidi gets even tougher on candidate Jasmin: “Where did your beautiful long hair go?” she asks the 23-year-old. Jasmine pushes, to which Heidi doesn’t let go, “I heard you asked for your wig to be made shorter. Now it’s a foot shorter, that’s not possible!” After all, she thought something about the appearance. “Your wig costs 7,000 euros, it’s human hair.” Sarina: “I find it a bit disrespectful.” Heidi: “I find it extremely disrespectful, she was shocked!”

Jasmin anticipates what is to come: for her too, #GNTM goes no further. “You shot the bird today. It wasn’t a good performance from start to finish,” criticizes the model mom from Düsseldorf. Jasmin had tripped on the catwalk and couldn’t recover mentally afterwards either. At least Jasmin had some nice words left for her colleagues: “I love you all!”

Heidi to Sarina: “The fact that she’s out now has nothing to do with her hair, although I think, in German, it sucks.” Speaking of hair, a second round of makeovers was announced at the end of the episode. Then the drama goes to the next round.