Get on your bike? Not if some conservative councils have their way. 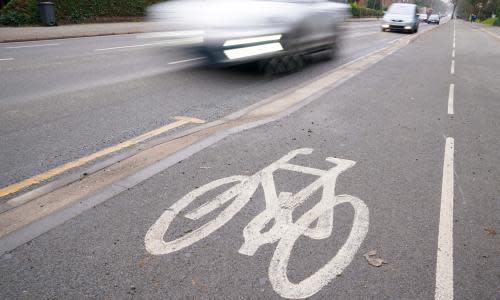 Transport officials have cut funding for three Conservative-controlled councils for not encouraging walking and cycling amid a local Conservative backlash against government-backed plans to reduce traffic and pollution.

The Department for Transport (DfT) was forced to cut active travel funding to a number of councils after Tory councilors removed pop-up cycle lanes and pedestrian areas before they had a chance to change the way they people travel.

The Royal Borough of Windsor and Maidenhead received no funding to draw up bicycle and pedestrian infrastructure plans last year after it dropped proposals for two low-traffic neighbourhoods.

This month, the Tory-led township announced it would remove pavement widening measures on eight streets, in part to increase car parking spaces. At a town forum discussing the removal, a council official declared that “car is still king” in Maidenhead.

Martin Richardson, who bikes with his son in the district, said many felt he was too busy to bike even short distances. “People feel scared,” he said. “Not family friendly [to cycle] because there is no protection.

A non-Tory council, Brighton and Hove, had withheld funding after Conservative and Labor councilors outvoted a minority Green Party administration to tear down a temporary cycle path connecting schools and workplaces, despite a report that warns that removal would adversely affect safety and the environment.

The government’s active travel strategy states that funding will stop if councils “do not take active travel seriously”, including removing “schemes prematurely”.

A DfT spokesperson said: “We have consistently made it clear to local authorities that they must offer good quality active travel schemes, to ensure our roads work for all, or funding will be withheld.”

Cycling UK said it was concerned that too many councils were scrapping schemes prematurely. “Poll after poll shows that active travel measures are really popular, but councilors and MPs are listening to a vocal minority and a campaign of disinformation by the media,” said the charity’s Duncan Dollimore.

Windsor and Maidenhead and Leicestershire councils said they were committed to developing plans for cycling and walking. West Sussex said it was providing permanent improvements to walking and cycling throughout the county.

- Advertisement -
Share
Facebook
Twitter
Pinterest
WhatsApp
Previous articleThe First Minutes Are Crucial: Disaster Guards Explain How You Can Protect Yourself In The Event Of A Nuclear Blast
Next articlePutin’s future ‘depends on the Russian people’, UK minister says after Biden calls for his removal