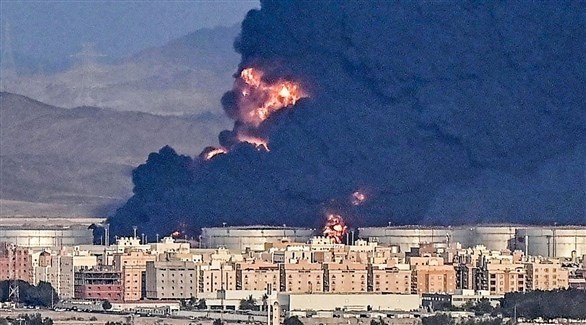 In their terrorism, frivolity, and criminality, the Houthi militia has exceeded the upper limits of deliberate harm that no sane person would accept, by systematically and deliberately attacking civilian and economic facilities in Saudi Arabia.

The United Arab Emirates, in its condemnation of the terrorist attacks, stresses the need for a deterrent response and an immediate and decisive stance from the international community to stop these actions that aim at energy supply and global economic stability.

The only justification for the blood militias’ blatant violations and sabotage lies solely in the fact that the Gulf’s proposal to hold an inclusive conference for Yemenis in Riyadh on March 29 will lead to their political isolation as the only party obstructing the political solution. after it was isolated from the security forces by designating it as a terrorist group.

16 attacks between Houthi drones, projectiles and ballistic missiles that targeted far beyond oil products, electricity and water stations in the brother Kingdom, namely the security and stability of global energy supplies.

And because the problem has become a direct threat to regional and international security and stability, especially since Saudi Arabia has announced that it is not responsible for the shortage of supplies to global markets, a collective action not only to pressure the Houthis, but those behind them to sabotage the global economy.

The terrorism of cowardly militias requires effective action to be swiftly and firmly curbed by the international community. The United Arab Emirates once again stands in full solidarity with the Kingdom and affirms, on the basis of a single and indivisible security, to stand with it in one line against every threat to its security and stability, and to support it in all measures that it taking.