From the siege of Kyiv to the “liberation” of Donbass… Have Russia’s goals in Ukraine changed? 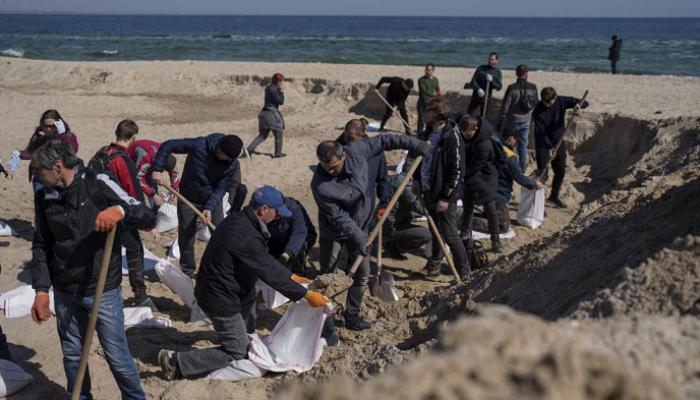 A new phase looms on the horizon of the war in Ukraine, with the Russian focus shifting from ground attack on the capital, kyiv, to what Moscow calls the “liberation” of the Donbass region.

The US Associated Press quoted unnamed officials as saying that Russian forces in Ukraine have shifted their focus from a ground offensive against kyiv, to prioritizing the “liberation” of the Donbas region in eastern Ukraine, which suggesting a new phase of the war.

According to the agency, it seems that it is too early to know where this will lead, wondering if Russian President Vladimir Putin has reduced his ambitions in search of a way out of the war, especially considering the defensive positions that Moscow has taken. recently near kyiv indicates a sudden recognition of strong Ukrainian resistance.

On the other hand, the Russian forces may aim to continue the war with a more limited focus, not necessarily as an end game, but as a way to reorganize the ranks to deal with early failures and use Donbass as a new starting point, according to an American analyst. .

Russian forces are under great pressure in various parts of Ukraine, according to the same source, who indicated that the United States and other countries are working to speed up their transfer of arms and supplies to kyiv.

Russia said on Friday that it had achieved its strategic goals from the first stage of the military operation, as it often refers to the West’s attempts to cheat its failure in an effort to push it into storming cities at high human cost.

Russia’s deputy chief of staff Sergei Rudskoy said his forces had largely achieved the “main goals” of the first phase of what Moscow called a “special military operation” in Ukraine.

In an apparent response to Rudskoy, Ukrainian President Volodymyr Zelensky appealed to Russia to negotiate an end to the war, but made it clear that Ukraine would not agree to give up any of its territory for the sake of peace.

In recent days, a senior US defense official said, Russian ground forces have shown little interest in advancing on kyiv, despite continuing airstrikes on the capital.

“At least for the moment, it doesn’t seem like they want to go after kyiv aggressively, or at all. They are focused on Donbass,” added the official, who requested anonymity to discuss internal US assessments of the war.

Since the beginning of the war on February 24, Russian President Vladimir Putin has been ambiguous in explicitly defining his military goals in Ukraine, outlining the government’s “disarmament” and “denazification” goals, in addition to “liberation.” . Donbass, of which he was a part, has been under the control of Russian-backed separatists since 2014.

In the four weeks since, the Ukrainians have put up more resistance than Putin likely expected, and the Russian forces have slowed down due to various problems, including poor logistics and possibly low morale.

Stephen Biddle, a professor of public and international affairs at Columbia University who has studied US wars in Iraq, Afghanistan and elsewhere, said it was difficult to decipher Moscow’s intentions from Friday’s statement.

“It is plausible that they are basically trying to reduce their perceived war goals to something they have already achieved,” he added, referring to their de facto control of parts of Donbass.

It is possible, he says, that the Russians realized they had started the war the wrong way, with fighting forces scattered in small numbers in various parts of the country. In this case, they may try to regroup with an eye on the Donbass and make it a new starting point for an offensive that they can expand later.

Putin may be “recalculating,” said Loren Thompson, a defense analyst at the Lexington Institute in Washington. “Moscow may be looking for a way out of the quagmire in Ukraine, and focusing its military objectives on the Donbass may be a way out. without admitting defeat.