From European Championship glory to World Cup disaster: What happened to Italy? 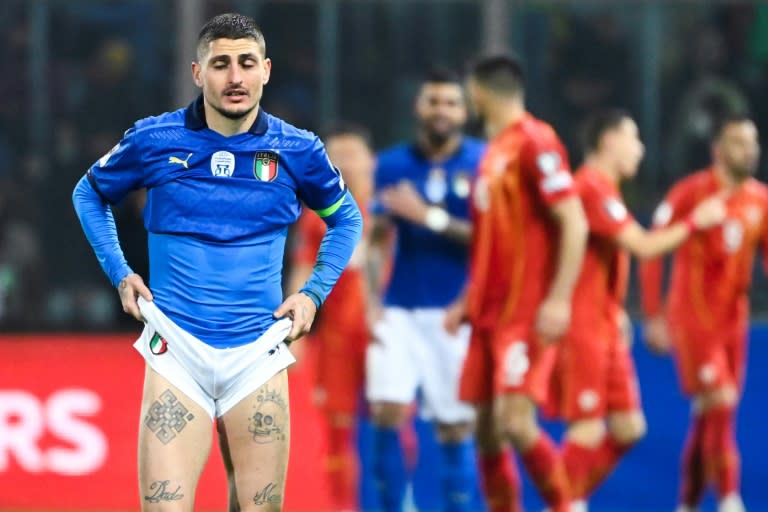 AFP analyzes what has become of the Azzurri since their triumph at Euro 2020, which seemed to herald their return as a world power after missing out in 2018.

One of the hallmarks of the early stages of Roberto Mancini’s reign as manager was that he gave players the freedom to enjoy their football and insisted on an expansive style of play that drew fans in and created real momentum going forward. European Championship.

After bringing in new faces throughout the squad, Italy won all of their Euro qualifiers and their first three World Cup qualifiers, often in a more relaxed style than traditionally associated with discipline-focused Italians.

However, once Leonardo Spinazzola injured his Achilles tendon in their 2-1 quarter-final victory over Belgium, Italy missed a key outing and reverted to a more traditional and solid style that seeped into their performances after Wembley.

On Thursday, Italy dominated as expected, but there was a great sense of tension on the pitch that had increased with each disappointing performance.

The victory over Belgium in Munich in the European Championship quarter-finals was the 13th in a row going back to the previous November, during which time they had scored 36 times and conceded just twice.

Between then and Thursday’s disaster, they drew six times in nine games with five of their 13 goals coming in one of their two wins, against Lithuania.

Up front is where Italy are weakest, but Ciro Immobile’s inability to replicate his excellent form from Lazio for the national team is the most striking example of just how stale Italy’s football has become.

Opportunities have been hard to come by in recent games and their last two regular qualifiers, against Switzerland and Northern Ireland in November, particularly lacked the inventiveness that would give someone like former European Golden Boot winner Immobile the opportunities you need to score.

And again on Thursday he was all but invisible, with his back permanently to goal and displaced by both a tight defense and two wingers who cut in to shoot rather than create space.

Mancini said “the good luck we had going our way turned into total bad luck,” and while good fortune doesn’t explain why it persisted with out-of-form players like Lorenzo Insigne and Nicolo Barella, it is a factor.

If Jorginho had scored his injury-time penalty in Italy’s penultimate qualifier against Switzerland, Italy would almost certainly have their ticket to Qatar by now.

However, the Chelsea midfielder crashed his penalty on the Stadio Olimpico running track, the match ending one apiece and that allowed the Swiss to steal first place in Group C on the final day.

History would also probably have been different if Yann Sommer, the hero of a famous European Championship victory against France, had not saved another Jorginho penalty in September’s goalless draw in Basel.

Penalties may not be a complete lottery, but winning two penalty shootouts after being the worst team in the Euro semi-final and final requires some good fortune that has simply run out since then.